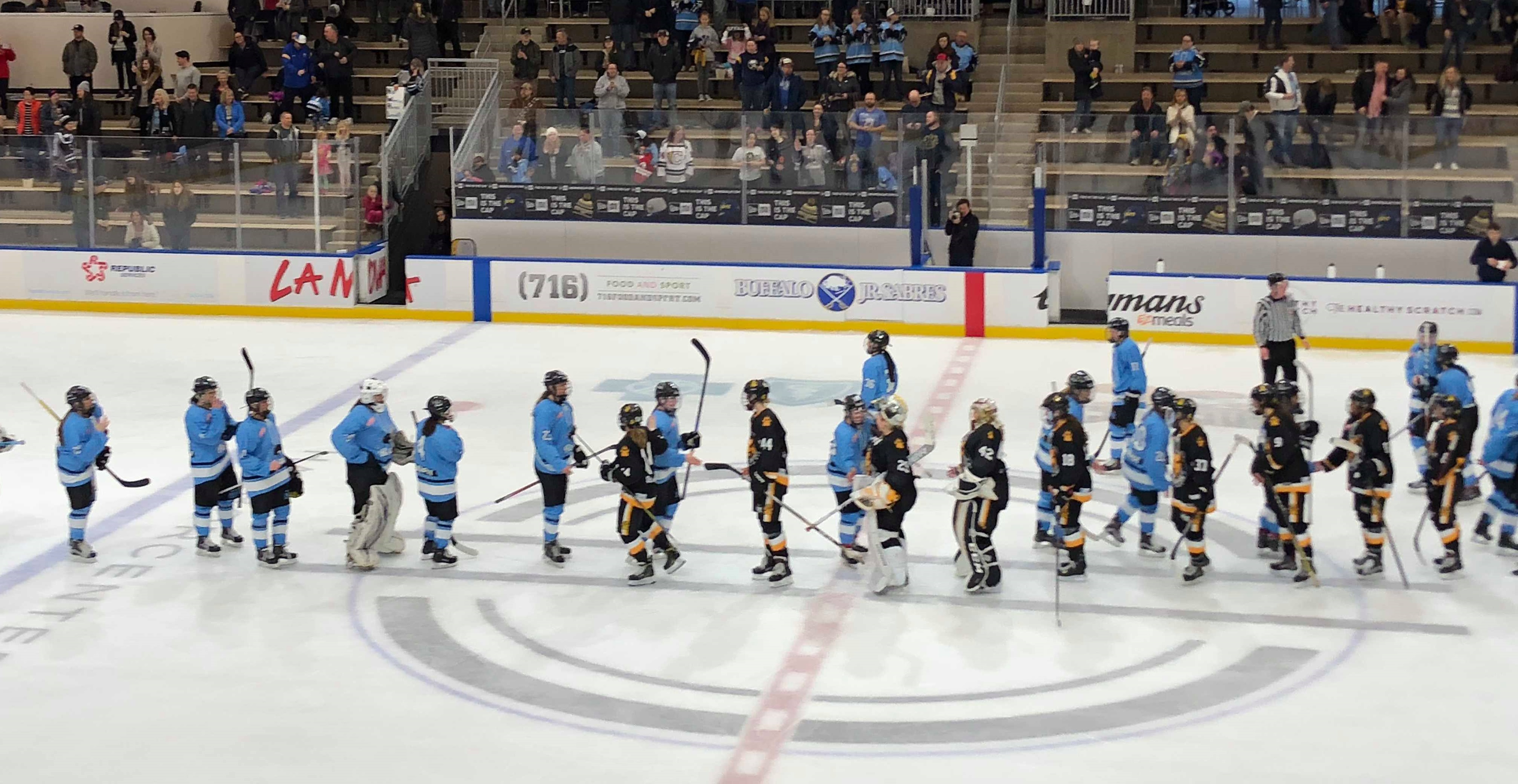 After another weekend of action in the NWHL, the Metropolitan Riveters and Buffalo Beauts extended their respective winning streaks. On the flip side, the Connecticut Whale and Boston Pride extended their losing streaks.

The Riveters have now won 11 straight, while the Beauts are on a five-game streak.

It took 60 minutes of regulation, five minutes of overtime, and the longest shootout yet in NWHL history for the Buffalo Beauts to top the Boston Pride. At the culmination of an exciting, fast-paced, evenly-matched game, the score was just 1-0.

"We were like a whole different team out there," said Beauts captain Corinne Buie after the game. "We played the whole 65 minutes and it was amazing to come away with the win."

Defender Lisa Chesson scored the game-winning goal in the 10th round of the shootout for the Beauts. Boston's Michaela Levine was unable to match the goal, which finally gave Buffalo the extra edge.

After the Pride notched the first few chances of the game, Buffalo poured it on, aided by two power-play opportunities in the opening period.

Boston had perhaps the best scoring chance in the second period, when Buffalo netminder Amanda Leveille gave up a rebound to a waiting Meagan Mangene right in front of the net. Mangene, however, flipped the puck up over the net, and the game remained scoreless.

Despite more penalties on each side, and several scoring chances for each team, the game remained scoreless after 60 minutes, and again after overtime.

The Beauts put up 47 shots on Boston's Brittany Ott, who played lights-out in net.

"There was one save in the second period, I think the goal horn went off, I don’t know how she held back to stop that. She was just lights out today and she was the only player who kept them in the game." - Leveille on Ott

Finally, it was time for a shootout.

Through five rounds, no pucks had entered the net. Finally, Beauts captain Corinne Buie scored in round six, sneaking it under Ott's pad. The goal, however, was matched by one from Boston's Jordan Smelker. Sarah Edney scored on a backhand shot in round eight, but Corey Stearns matched it. Finally, in round ten, Chesson went top-shelf for the game-winner.

"I didn’t realize that it was 10. I thought that went by really fast," Leveille said.

"I don’t mind going to overtime, going to shootout, as long as we play a strong three periods. I thought we played a very strong game all the way through, had a lot of control in their zone," Seiling said.

It took more than 60 minutes, but the Riveters extended their perfect season and have now won 11 gamess straight. The Whale have now lost seven in a row.

The Whale opened the game on solid footing, with two goals in the first five minutes. Meghan Huertas put her team on the board, while Kelly Babstock made it 2-0 just 54 seconds later.

The commanding Riveters, of course, weren't going to give up that easily. Kelsey Koelzer made it a one-goal game just minutes after Babstock's goal, on the power play. Madison Packer added another power-play goal early in the second period to tie the game at two.

After a scoreless third period, it took 4:28 of overtime to settle things. Packer scored her second of the game and fourth of the season to give the Riveters the win.

"We're the first place team in the league, we're going to get everyone's best. If we take a night off, you never know what's going to happen." - Packer

The Whale were unable to take advantage of four power play opportunities, a fact that head coach Ryan Equale noted. Despite that, he said the team is moving in the direction they want to be.

"We were really proud of the effort the team put in," Equale said. "Our ability to play 60 minutes has shown the last two weeks."

Every Riveters player aside from Kelly Nash notched at least one shot on goal in the win. Babstock accounted for nearly one-third (7/23) of the Whale's shots on goal.

Kim Sass made her Riveters debut in net, stepping in for Katie Fitzgerald. Sass stopped 21 of 23 shots faced in just her third NWHL appearance. It was her first game appearance since January 17, 2016.

"We hung her out to dry," Packer said of Sass, noting the Riveters' two early goals. "It was a reality check for us."

The NWHL announced its playoff format, which will remain a single-elimination format. Semifinal games will be played the weekend of March 17-18, with the Isobel Cup Final the following weekend.

The twist this year: games will be hosted by the team with the higher seed, giving NWHL fans in markets a chance to see their teams in the playoffs rather than having to travel to a neutral site.

"We've had a lot of success recently by taking the great athletes and role models of the NWHL on the road for events in Pittsburgh, Rochester, Minnesota and Tampa, and we plan to do more. But for these playoffs, it was time for a true home-ice advantage," said Hayley Moore, NWHL Deputy Commissioner.

The Riveters have already clinched a home playoff game.

This coming weekend, two streaks in the NWHL will end. The Whale and Pride, both on losing streaks, face off Friday at 6:00 PM at Warrior Ice Arena.

The Riveters and Beauts, who both have winning streaks going, face off Saturday at 1:00 PM in Buffalo.