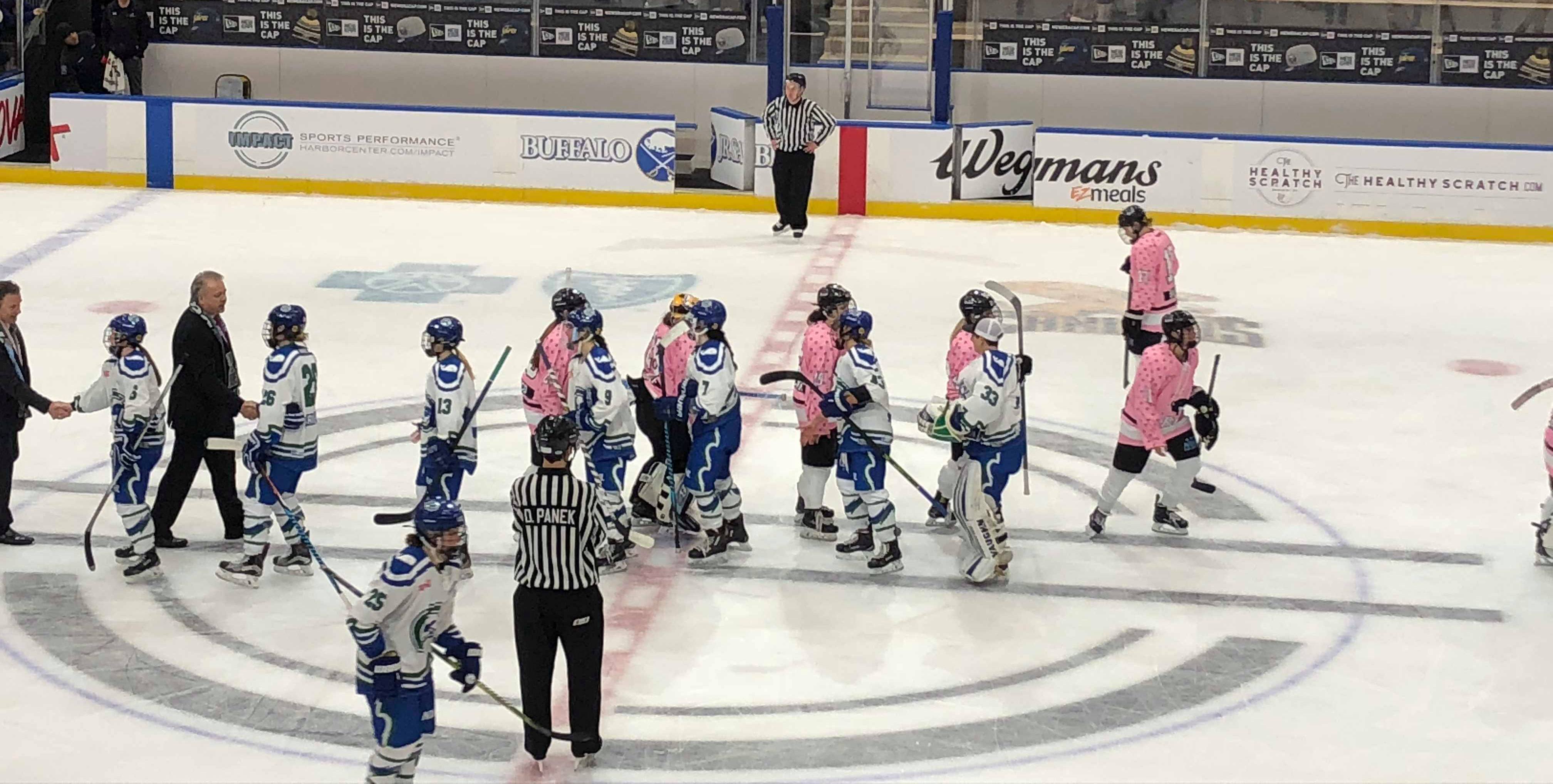 Two winning streaks in the NWHL were extended this weekend, as the Buffalo Beauts won their fourth straight and the Metropolitan Riveters remain undefeated with their 10th consecutive victory.

With 10 games in the books, the Riveters, of course, are at the top the league with 20 points. The Beauts are second with a 6-4-0 record and 12 points. The race for third place is much tighter; the Pride currently hold that spot with a 2-6-2 record and six points, but the Whale are just one point behind and are 2-7-1 on the season.

Less than a week after the Beauts won in Pittsburgh, the teams rematched in Buffalo for a Saturday matinee. A closely-matched, back-and-forth contest eventually resulted in the Beauts winning their fourth straight game via shootout.

The Whale came out strong with the first few good chances of the game, but the Beauts picked it up from there. The teams would remain scoreless until more than halfway through the game, when Kourtney Kunichika put Buffalo on the board.

Before the middle frame was over, however, the Whale would tie it up on Juana Baribeau's first NWHL goal. The stalemate would last through the remainder of regulation and through five minutes of overtime.

Buffalo's Hayley Scamurra scored the lone goal in the shootout with a slapshot to give her team the edge. Connecticut's Kelly Babstock came within inches of scoring on the final shootout attempt, but the puck hit the post.

The teams combined for 63 shots on goal.

While the Beauts are now on a four-game winning streak, the Whale are on a streak of their own: a six-game losing streak, that is.

The Pride and Riveters caught up after a weekend off from NWHL action with a pair of games this past weekend. Metropolitan would win both games to remain undefeated.

Saturday, leading scorer Alexa Gruschow opened the scoring with a shorthanded tally in the opening period. The Pride would tie it early in the second on a goal by captain Jillian Dempsey, but it was all Riveters from there.

Sunday's rematch in Newark was closer -- only a 2-1 margin -- but still ended with the Riveters coming out victorious.

After a scoreless first period, Bray Ketchum and Madison Packer put the Riveters up 2-0 after the second period.

Dana Trivigno scored on the power play for Boston in the third period, but the Pride were ultimately unable to stage a comeback.

The NWHL announced its rosters for the upcoming All-Star Game in Minnesota on Monday night. We'll have more coverage of the ASG to come, but for now, check out the rosters below:

The NWHL closes out the month of January with a pair of games on Saturday, January 27. The Pride visit the Beauts for a 1:30 PM Eastern puck drop, while the Riveters visit the Whale at 7:00 PM Eastern.