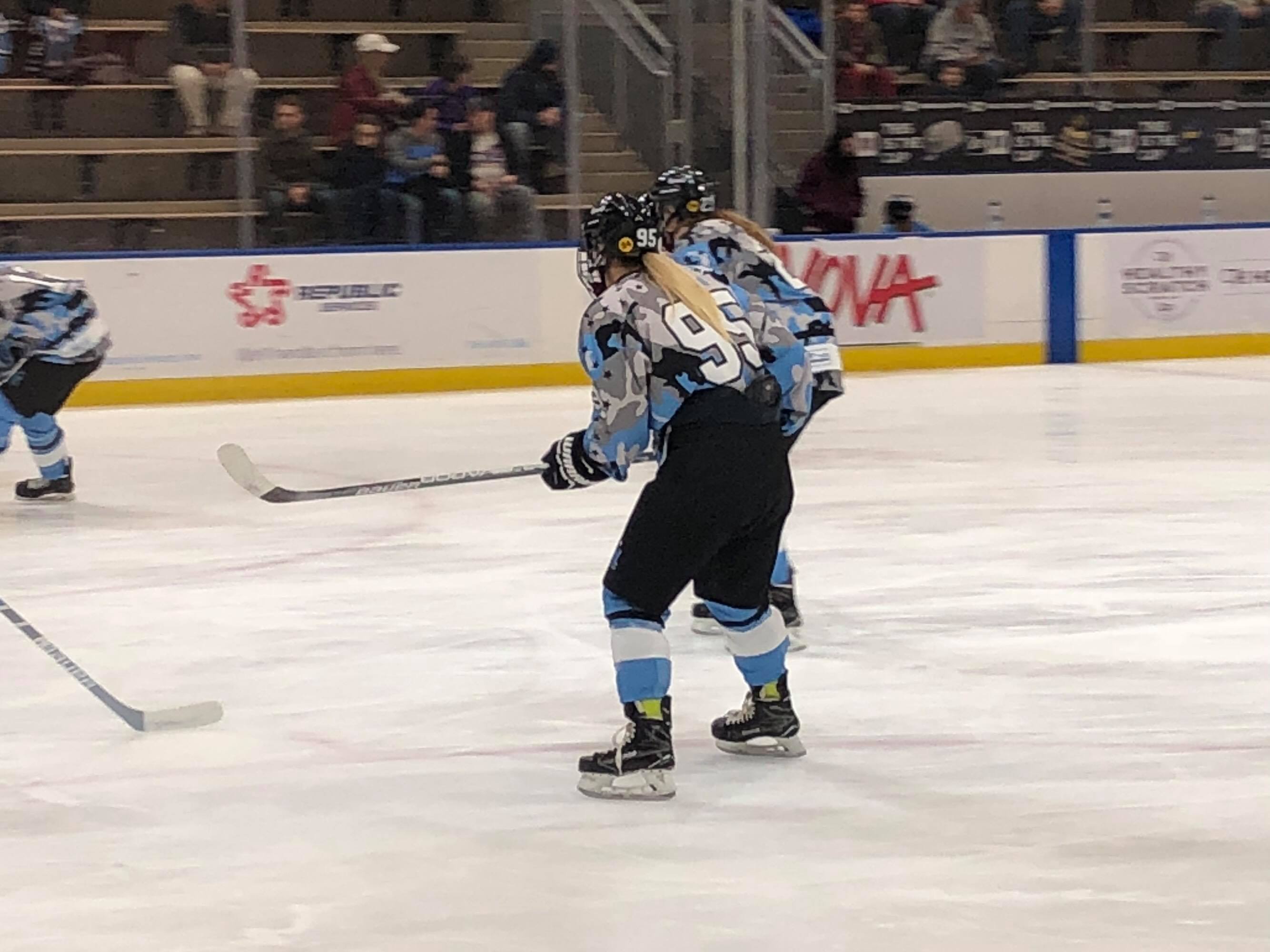 That's what Buffalo Beauts forward Taylor Accursi said when asked to describe herself as a player. It certainly rings true, as the rookie has notched five goals in her first four NWHL games. She's tied for the league lead in goals, and also leads all NWHL players in power play goals.

Three of her five goals have come with the player advantage -– and the season is only a quarter of the way through.

The 22-year-old signed with the Beauts this season after completing four years with the Mercyhurst Lakers. She finished her college career with 38 points, including 15 goals, in 123 games.

During her time at Mercyhurst, Accursi played with current Beaut Katherine Donohue, who tallied her first NWHL goal on November 18, and goaltender Julia DiTondo. She also played alongside former Beauts players including Emily Janiga, Shelby Bram, and Amanda Makela, and Beauts draft pick Jenna Dingeldein, who plays for the CWHL's Toronto Furies.

Prior to entering the NWHL, Accursi was already a champion, having won a gold medal at the U-18 Women's Hockey Championships in British Columbia in 2012 as a member of Team Ontario Blue.

From her debut with the Beauts, it was clear that Accursi's speed was going to be a factor in her game. Game after game, she's used her speed to her advantage, taking opportunities and setting up her teammates.

Her speed, she says, is one of her biggest strengths, and has helped her in the move from playing NCAA DI college hockey to being part of a professional league. Her ability to set up her teammates is another one of her self-proclaimed strengths.

"It's been a really good transition," Accursi said.

The biggest difference, Accursi said, between the college game and the pro game, is the physicality.

"I think the refs let a lot more go in this league versus the NCAA," she said.

From the first preseason game, Accursi made an impact on the scoresheet. She notched two assists in Buffalo's 4-2 win over Team China. When the regular season began, she was ready to go.

Accursi opened the scoring for the Beauts this season, potting her first professional goal on the power play. She added another goal in the third period for a two-goal performance on just four shots on goal in her first game.

The Beauts are making a statement against Boston. Up 3-0 as we approach the middle of the 2nd period. Taylor Accursi/@Accursi6 has taken sole possession of the @NWHL goal lead. She has 4 goals in her first 3 games with the Beauts. pic.twitter.com/xIdQ5JSKkI

Accursi scored once again on the power play the next week, in the Beauts' 6-2 loss to the Riveters in Rochester, NY. She then scored for the third straight game, with a pair of goals, including one on the power play, in the 5-3 win over the Pride on November 11.

As a result, she earned NWHL Player of the Week Honors on November 13.

Although she's currently sitting atop the NWHL's scoring leaders, Accursi is quick to recognize the contributions of her teammates and focuses on the team as a whole.

"I'm doing really well, and I have my teammates to thank for that," she said. "The girls are really supportive, and they push me every day to be better."

The Beauts are 2-2 on the season so far.

"I definitely think that as a team, we're heading in the right direction," Accursi said. "All in all, we have the group to accomplish really good things, and we've just got to keep moving forward."

Accursi calls herself a "reader" and a '"playmaker," but says that she's working on being able to get pucks and make plays off the boards.

The Ancaster, Ontario native is currently playing not too far from home. Ancaster is roughly 70 miles from Buffalo -– much closer than the 169 miles between Ancaster and Erie, where Accursi played college hockey for four years.

She said her family, including her parents and sister, try to make it to as many Beauts home games as they can. Accursi's family already had a Buffalo sporting connection, as her relative Mike previously played lacrosse for the NLL's Bandits as recently as 2010. He now works with the Rochester Knighthawks as Offensive Assistant Coach.

Her sister Hunter, 19, currently plays for the Brock Badgers in St. Catharines, Ontario -- just a short 30-minute drive over the international border. Both Hunter and Taylor previously played for the Burlington Barracudas of the PWHL.

On the ice, Accursi seems to be having no trouble finding her stride in her first season playing professional hockey. Off the ice, she's in a transition period, having just graduated from Mercyhurst. She's applying for dental school and for a Master's degree, as a "Plan B" of sorts, but is focusing primarily on hockey for the time being.

It's only been four games, but so far, the life of a professional hockey player is treating her well. "It's been a lot of fun," she said. "It's something for girls to look forward to that are coming out of college, for sure."

There's still a long season ahead for Accursi and the Beauts. The NWHL returns to action December 2, with the Beauts on the road for the next two games in Boston and New Jersey. It's early, but if Accursi can maintain her scoring pace, she could end the season at or near the top of the league's leaders.