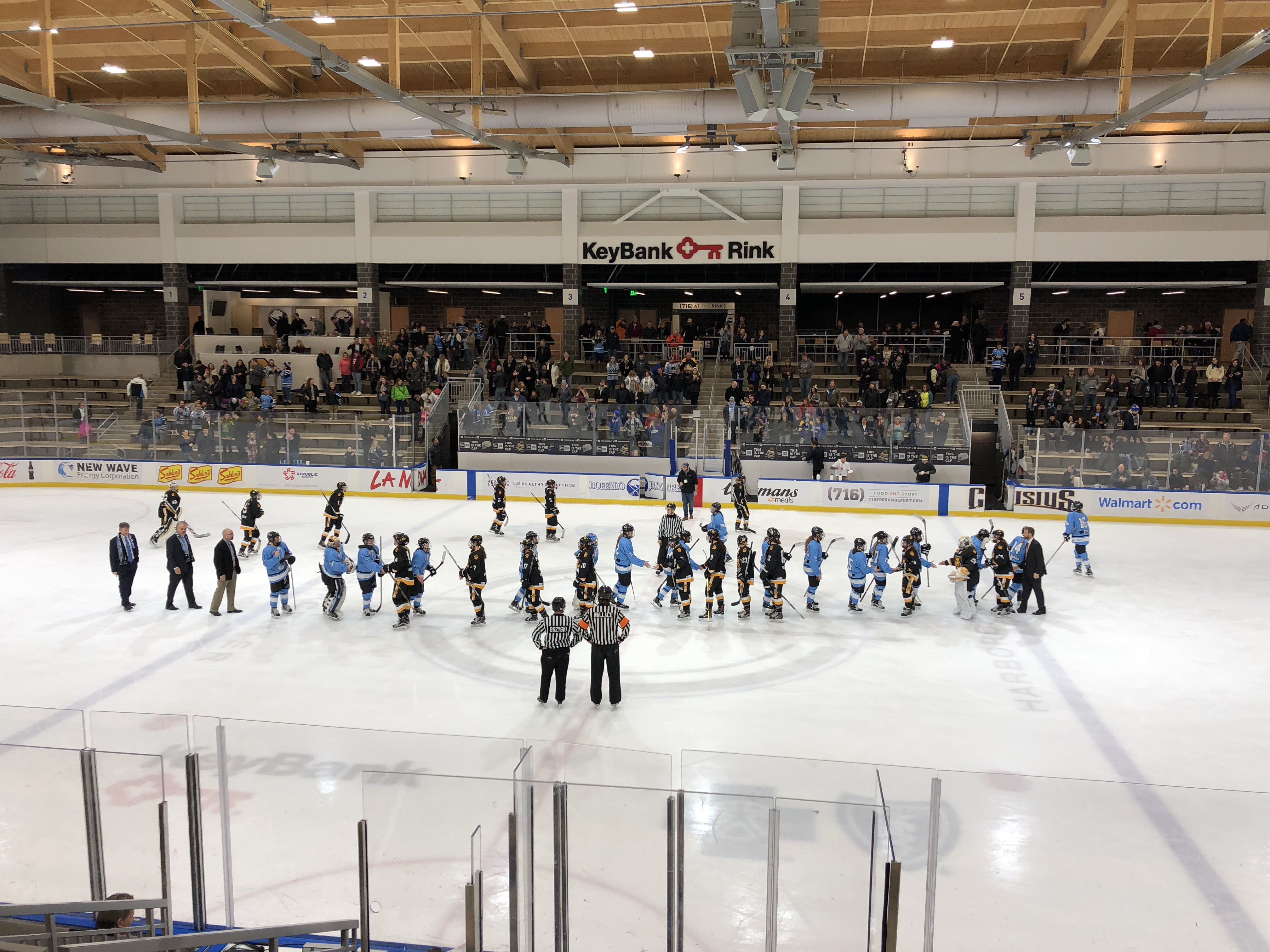 The Metropolitan Riveters remain undefeated through three games of NWHL action, while the Boston Pride are still winless, as the league wrapped its third week with a pair of games on Saturday. The Riveters' plus-11 goal differential is the only positive in the league, and every team has now played each other at least once.

After three weeks, Beauts rookie forward Taylor Accursi is leading the league in goals (5), while the Riveters' Courtney Burke leads the league in assists (6). Katie Fitzgerald has a .948 save percentage and 1.33 GAA.

This past weekend, the Riveters maintained their perfect record with a 5-1 win over the Connecticut Whale. The Beauts topped the Pride 5-3 after raising their Isobel Cup championship banner.

The Whale struck early, going up 1-0 less than halfway through the first period on Kaycie Anderson's first professional goal.

"She broke the puck out well, she made a nice pass for herself off the boards, so seeing players be creative and have that offensive touch was nice to see," said Whale head coach Ryan Equale after the game.

They'd hold that lead for just one minute and 40 seconds, however, and the game would go downhill from there for Connecticut.

Jenny Ryan tied the game on a power play goal, her first of the season. The Riveters kept coming from there, scoring three times in the second period to give themselves a commanding three-goal lead.

Lauren Wash, in her first game of the season, scored her second career NWHL goal. Wash joined the Riveters for Saturday's game after signing with the team late in the week. She had originally announced her intention to focus on school and not return to the league, but changed her mind.

Tatiana Rafter also scored her first of the season. The Riveters would add one more goal on the power play in the third period to take the 5-1 lead with just over 12 minutes to play, and they’d hold on from there.

Fitzgerald had 27 saves for the Riveters, while Sydney Rossman stopped 25 of 30 shots faced in net for the Whale.

Equale noted his team's ability and willingess to respond in the third period, despite being down three goals, as a positive to take away from the loss.

The higher-scoring affairs, he said, are "just not a strength for us, and it's fine, but it's only fine if we can limit them to elss than 30 shots, and obviously less than five goals."

"We had a plan, we just weren't able to execute it," Equale said.

He also noted the Riveters' speed and number of scorers on their roster as factors that played into the game.

Prior to the game, the Beauts raised their Isobel Cup champions banner, a feat accomplished by defeating the Boston Pride. They'd beat Boston again -- albeit a very different Pride team -- with a 5-3 win on Saturday.

Following the team unveiling their championship banner, and players from last year's team receiving their commemorative championship rings, it was game on in Buffalo for the Beauts' technical "home opener" after last week's game in Rochester.

Kaylyn Schroka opened the scoring with the lone goal in the first period, scoring off a rebound that came out following a shot by Kristin Lewicki.

Buffalo exploded offensively for three goals in the second period. Accursi, Maddie Elia and Corinne Buie all scored for Buffalo. Accursi's first goal of the game marked her third power play goal of the season.

This marked the first time the Pride have ever been down 4-0, but they remedied that with Haley Skarupa scoring early in the third.

"When you go into a third period up 4-0, you know you’re going to get pushed back," said Beauts co-head coach Ric Seiling. "The question is, how are you going to deal with it?"

Accursi made it 5-1 before Boston rallied back with two goals in 1:07 from Jillian Dempsey and Mary Parker.

In the end, though it seemed shaky, the Beauts held on for the win. Amanda Leveille had 29 saves for Buffalo, while Brittany Ott had 27 saves on 31 shots for Boston. Brianna Laing, who came in to relieve her in the second period, stopped 10 of 11 shots.

Buffalo was without Jess Jones and Sarah Casorso, who were suspended following last weekend’s game against the Riveters. Both are eligible to return on 11/18.

The Beauts were served just two penalties over the course of 60 minutes, a big difference from that game against Metropolitan.

"Every game is a learning experience," Seiling said. "We came out with the win, but what can you take away?"

The Riveters and Beauts will rematch in Buffalo on Saturday, November 18 for a 7:30 PM puck drop at HARBORCENTER. Buffalo will look to give Metropolitan its first loss and stay out of the penalty box after they fell to the Riveters 6-2 in the penalty-riddled game earlier this month.

Connecticut and Boston will then face off on Sunday afternoon at Terry Conners Ice Rink. With the Pride searching for their first win of the season, they'll look to play a tight game, and both teams will be looking for offense -- both have scored just five goals each in three games so far.