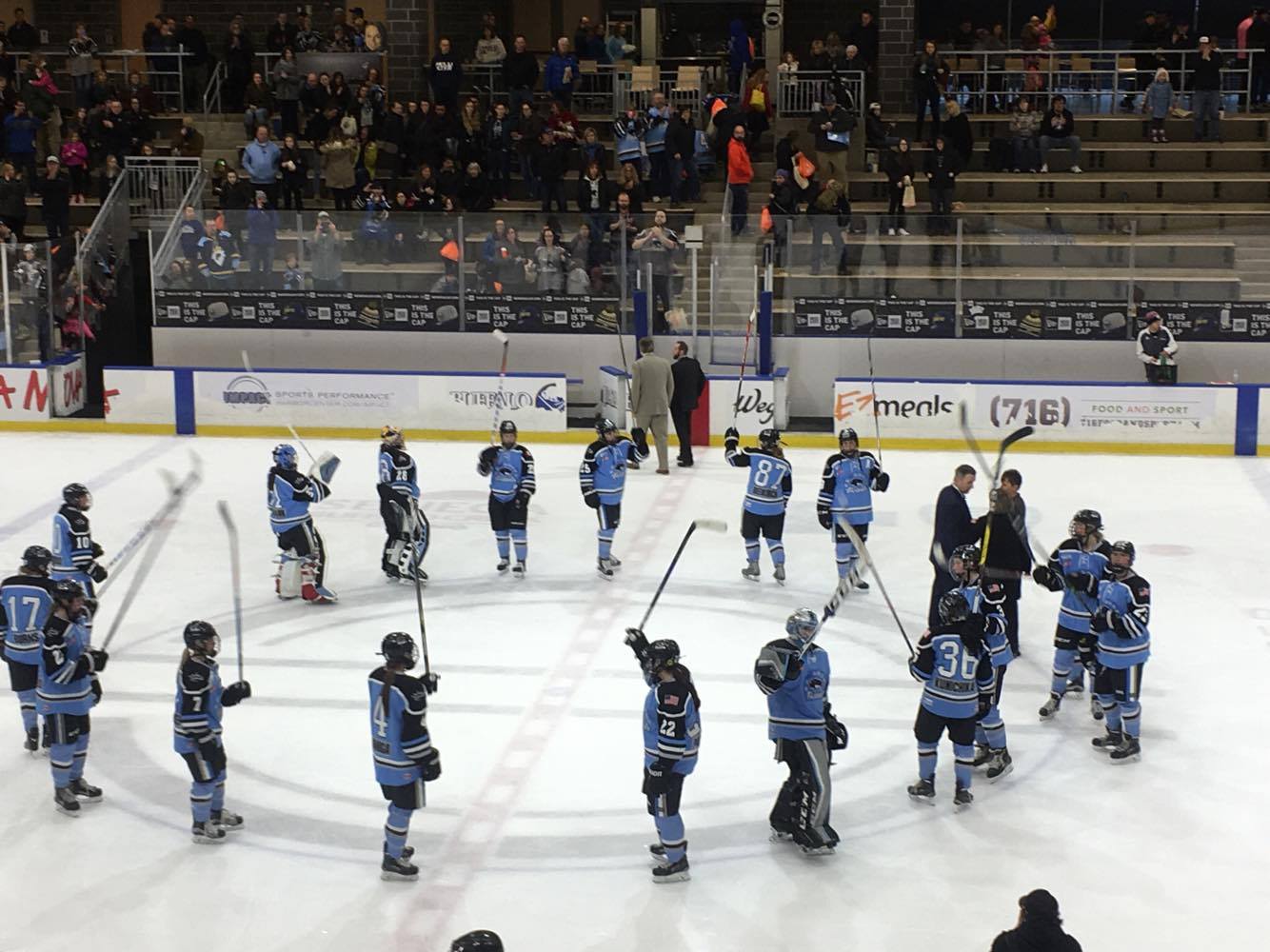 The Connecticut Whale couldn’t quite pull off a victory over the still-undefeated Boston Pride Friday night, but they still managed to come out of the weekend with a win over the Buffalo Beauts on Sunday afternoon.

At one point, the Whale held a 4-1 lead over the Pride during Friday’s game, but they slacked off enough to give the Pride too much space. As a result, Boston took advantage by scoring four unanswered goals in a span of 3:57 to take a 5-4 lead.

Those four goals, two of which came shorthanded, were enough to give Boston their 14th win of the season. They’ve clinched first place in the NWHL with just a handful of games remaining, and are set to host the first playoff game on Thursday, March 16 at 7:30 PM at Warrior Ice Arena.

Their opponent, of course, is still to be determined, but we know one thing for sure: it won’t be the New York Riveters. With the Beauts loss on Sunday, the Riveters have clinched second place in the league. They'll host a playoff game on Friday, March 17 at 7:30 PM at the Barnabas Health Hockey House.

With playoff positions being determined by points percentage, rather than just by straight-up points, Buffalo and Connecticut are still vying for third place after the Whale's 4-2 win Sunday.

Buffalo had a few solid chances early in the game, including a dangerous opportunity by Shiann Darkangelo, who carried the puck behind the net and around and nearly scored. Buffalo had a power-play opportunity with Anya Battaglino in the box, but it would be the Whale who would take advantage.

The Beauts went with four forwards (Steadman, Browne, Darkangelo, and Buie) on the play, with Megan Bozek as the lone defender. Despite the offensive power on Buffalo's side, Nicole Connery made it a 1-0 game on a shorthanded breakaway, and the Whale held strong for the rest of the opening frame, despite being outshot by a 12-8 margin.

"We had a few breakdowns that cost us...these are the things you work on getting ready for playoffs," said Beauts co-head coach Ric Seiling.

Just over seven minutes into the second period, the Beauts were given another chance on the power play. This time they capitalized, with Megan Bozek putting one of her patented slapshots on net from near the point for her fifth goal of the season. The game would remain tied for just a few short minutes before Haley Skarupa, Connecticut’s leading scorer, gave her team the lead.

"We didn’t play a full sixty minutes," Bozek said. "We had them in that first period and part of the second, and if we keep on a team that has speed like that with Kelli Stack, Haley Skarupa, Dana Trivigno, we have to keep up with them. When they beat us to those pucks and gather offensive positioning, then we’re stuck scrambling."

The Whale increased their lead to a two-goal margin with a power-play goal by Nicole Kosta less than halfway through the third. Kosta scored on a beautiful shot, picking the top corner right underneath the crossbar behind McLaughlin, to pot her sixth of the season.

With less than five minutes remaining on the clock, the Beauts closed the gap to just one goal as Emily Janiga put it in top-shelf behind Shenae Lundberg. Not even a minute later, the Whale spoiled the comeback, with none other than Kelli Stack potting one for Connecticut.

Despite a few late chances, the Beauts dropped the 4-2 decision to the Whale in their regular-season home finale.

"A lot of the games are the same," said Beauts netminder Brianne McLaughlin. "We have some spurts of genius and then some really big ugly ones too, so I think we’re getting down to crunch time and we need to start honing down and eliminating some of those big breakdowns in our D zone. We’re getting there."

"We had lapses, and that's what they capitalized on," Bozek said. "We're fully capable of playing sixty minutes, and we had a full roster today, which is not common for the Beauts...those small mistakes, those small errors are when they capitalized and put the puck in the net."

Seiling and Beauts co-head coach Craig Muni mixed up some of the line combinations on Sunday night, including reuniting the successful Browne-Skeats-Kunichika line.

"We're just trying to get something going, see if they can stir something up for us, and they did a good job at it," Seiling said.

With Boston and New York now locked into first and second place, respectively, the Beauts and Whale will now vie for third and fourth place in the NWHL.

Buffalo is currently 5-9-1 on a season where they've struggled with consistency and have been unable to put together back-to-back wins.

"We've had a lot of issues that have happened throughout the year, getting our team together," Seiling said. "It takes that camaraderie to get there. That's what we're looking for, finding the right combinations."

As the NWHL heads toward the postseason, it'd be easy for players to focus on the upcoming playoffs. For the Beauts, however, the focus remains on the last two games of the regular season.

"We have to finish out the regular season before we even think about playoffs," said Beauts defender Megan Bozek. "We have a big game against Boston next weekend and then Connecticut the weekend after that, so we’re just trying to pull out two wins there."

"We're trying to put ourselves in a good spot for playoffs," McLaughlin said.

"If we could not play Boston [in the] first round, I think that would be ideal," McLaughlin said.

"Regardless of the scores, we need to gear up for playoff hockey, because it’s a one-and-done deal this year, so we need to make every game count," Bozek added.

For McLaughlin, as this season winds down, it's a little bit more special. She announced during the NWHL's All-Star Weekend that this season would likely be her last.

"I’m trying to mentally prepare myself for the end of my career and I try to make this an exciting thing," she said after Sunday's game.

"I love being here, I had a lot of people from home...some of the goalies that I coach in Pittsburgh were there so it’s more of an exciting thing for me, being able to play in front of everybody one last time before I hang ‘em up. But I’m also really busy in Pittsburgh with my business, that’s growing, so I think that is helping me mentally try to phase out of being a player into a real business person," McLaughlin said.

If this is indeed McLaughlin's last season, the Beauts will certainly miss her in net.

"Bri's been an integral part of this team," Seiling said. "Last year, I felt she was the best goalie in the playoffs, I thought...she got us to the Isobel Cup."

"We know she has indicated this may be her last season, and if so, we wish her and her family the best," Seiling added.

"We've rotated the goalies throughout the whole season, because Amanda [Leveille] has warranted that she's a contender," Seiling said. "If Bri is, if this is truly her last year and she goes off into retirement, then we've got another goaltender ready to step in and take that number one spot."

Following the Isobel Cup semifinals on March 16 and 17, the two remaining teams will play for the championship on March 19 at the Tsongas Center at UMass Lowell. Puck drop is set for 6:00 PM.