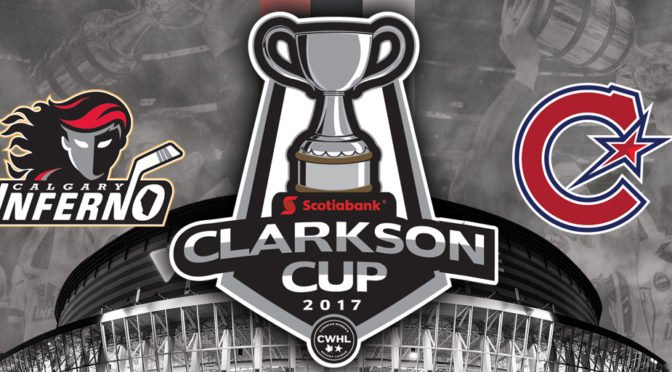 After a packed weekend of playoff hockey, the Clarkson Cup Final matchup is set. The best-of-three Clarkson Cup semifinals had a few surprises, but the two top teams in the CWHL, the Calgary Inferno and Les Canadiennes de Montreal, prevailed and will return to Canadian Tire Centre in Ottawa for a second straight season to contest the Clarkson Cup.

One big surprise was a down note: the #3-ranked Brampton Thunder failed to put up much of a fight against Les Canadiennes and fell to Montreal in just two games, after scoring only two goals.

Jess Jones, who tied Marie-Philip Poulin for the league lead in scoring this season, scored one of those goals on Saturday; the other Brampton goal of the series came in the second period of Game 1, by Jamie Lee Rattray.

In contrast, Montreal's offense was unrelenting. Brampton played much of Game 1 shorthanded and allowed Les Canadiennes to go 5 for 11 on the power play. They added two even strength goals for a final score of 7-1 -- a big statement game against a team that many had pegged as the most likely to upset.

A wild finish (of mysterious origin, since the game was not broadcast) saw Brampton rack up 36 penalty minutes in the final three minutes of the game. It may have been started by a goaltender interference call on forward Becca King. Brampton only had 2 PP chances all game. Charline Labonté finished with 24 saves on 25 shots, and Erica Howe took the L for the Thunder.

Game 2 was closer, but only slightly. Les Canadiennes opened the scoring just 16 seconds in on a tally from Marie-Philip Poulin, and Ann-Sophie Bettez made it 2-0 on a breakaway. Jess Jones cut the lead in half, but Poulin added another goal in the first period, making the score 3-1.

A scoreless second set up an uneasy third period for Brampton, who failed to get much of anything going, and the Montreal added insurance goals in the last half of the period from Noémie Marin and Kim Deschênes. Montreal seemed to advance without even breaking much of a sweat, even though Brampton was more than capable of putting up a serious fight. Montreal's experienced defense seemed to make the biggest difference -- veteran Cathy Chartrand, for example, leads the playoffs in scoring after the first round with 4 assists and 1 goal.

Brampton didn't have the shots, and most that did get through were not threatening. Their offense, which can be quite dangerous in transition, was rarely afforded the opportunity to turn around quickly and score. Instead, the Montreal D was stopping them at the blueline and turning play the other way.

In Calgary, the GTA was represented in a much different way; in fact, the Furies threatened to unseat the reigning champions. Game 1, which was not broadcast, saw Toronto triumph by a score of 5-2.

Calgary jumped out to an early lead on a goal from Rookie of the Year candidate Iya Gavrilova, set up by captain Brianne Jenner. However, Toronto tied it up with a tally from Jenelle Kohanchuk.

In the second period, the Furies jumped out to a 3-1 lead on goals from Erin Ambrose and Kelly Terry, and while the Inferno added a goal from Jessica Campbell, Kohanchuk completed a hat trick to lead her team to the 5-2 victory.

Christina Kessler made 47 saves on 49 shots, so while the Inferno were without the services of Louise Warren and Jacquie Pierri, they weren't necessarily starving for offense. The stat sheet of Game 1 tells a story of Kessler strongly outplaying her counterpart Emerance Maschmeyer, who finished with 22 saves.

By Game 2, the Inferno had their full roster back, and they made the goaltending switch to Geneviève Lacasse. This time, the script seemed to flip. While Toronto scored early thanks to captain Natalie Spooner, the Inferno continued to get the better of the shots and slowly chipped away at Kessler, adding goals from Haley Irwin, Blayre Turnbull, and Gavrilova.

Both teams spent extended periods on special teams, as Toronto and Calgary took seven minor penalties each, and Calgary's only PP goal came in the form of Gavrilova's insurance tally in the third. The special teams battle worked to the Furies' disadvantage, since they have a strong PK unit, but it greatly reduced the amount of time that they had to get shots on goal. Lacasse finished with 28 saves on 29 shots, and was greatly insulated in a crucial third period (making only 4 saves), while Kessler faced 11 and allowed a goal.

Game 3, however, was really where the Inferno hit their stride. Despite a scoreless first, the shot count for Calgary was an astonishing 20 to the Furies' 6, and the Furies must have felt like they had weathered an incredible storm to keep the score knotted at 0.

The second period was roughly even. Calgary opened the scoring on a PP goal from Haley Irwin, who deflected a puck five hole on Kessler. Jenelle Kohanchuk added a goal to tie the game, which set up a winner-take-all third period.

And while the Furies pressured at times, they also seemed to pass up some opportunities to shoot, and Lacasse looked square to anything they sent her way. Midway through the final frame, the Inferno scored twice in under 15 seconds to put the series away. The first goal was a snipe on Kessler from Brianne Jenner, and the second was a timely play on a cross-crease pass by Iya Gavrilova.

While the Furies pushed hard, they couldn't cut into the 3-1 lead, and fell in three games to the Inferno. Kessler finished with 48 saves on 51 shots, and, according to Inferno captain Brianne Jenner in her postgame interview, has a strong case for MVP of the playoffs.

For Toronto, Calgary simply outmatched them shift-by-shift in depth. Kessler gave them a chance to win, but the Inferno rarely put a forward line on the ice that isn't likely to go score a goal. Jenelle Kohanchuk, Kelly Terry, Natalie Spooner, and Erin Ambrose all had great moments throughout the series, but Calgary's ability to cycle in the offensive zone limited their chances to get up-ice. If Toronto needs to improve anything to get back to the Clarkson Cup Final, it's their puck retrieval and zone exits. Calgary might be the best women's hockey team in the world right now at keeping puck possession in the offensive zone. It's a testament to Toronto's work ethic and Kessler's play that this series stayed as close as it did.

Toronto is also a very young team. And with the national team centralizing for the Pyeongchang Olympics, the Furies might have one of the more potent offenses in the 2017-18 season and will likely return to the playoffs.

Three playoff games in three days is a lot, but the Inferno have a week to rest before facing Montreal. Don't expect a blowout next Sunday -- last year, the Inferno won 8-3. Les Canadiennes are a veteran squad who won't be surprised twice.

See you at the Canadian Tire Centre! We'll have more analysis on the three teams that won't be playing anymore this season, and a preview of the Calgary-Montreal matchup.