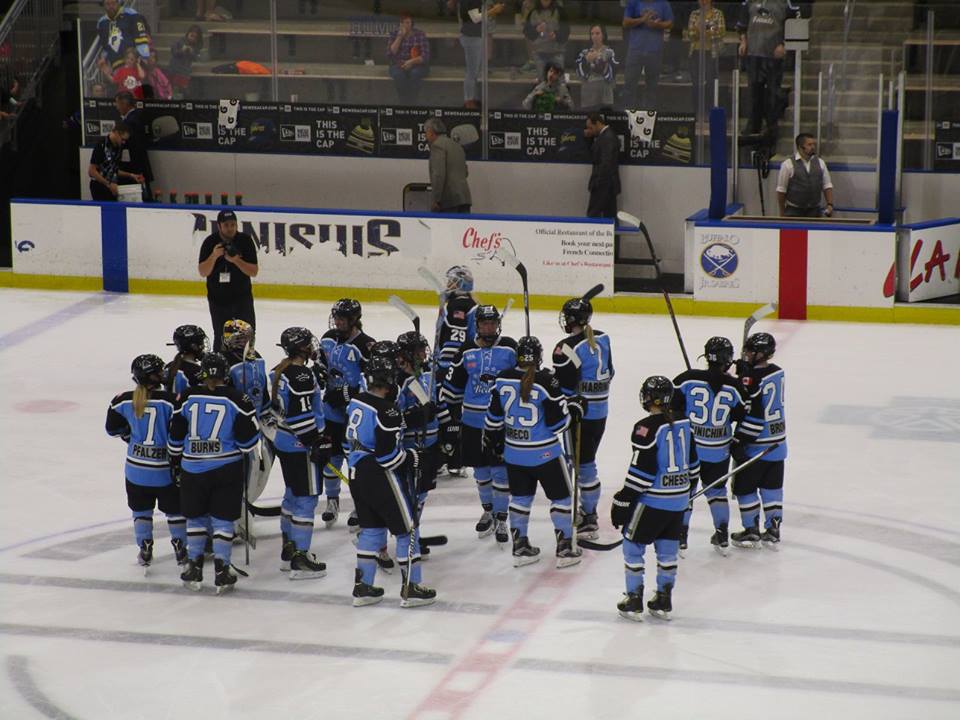 The Buffalo Beauts kicked off the 2017 calendar year with a close 6-5 victory over the Connecticut Whale on Saturday night. As was to be expected between the rival squads, special teams were key, and especially for Buffalo. The Beauts scored four of their six goals on special teams.

The Beauts came out with the win, but it wasn’t an easy one. They squandered several leads, including a 3-0 lead and later, a 4-3 lead. The Whale scored their fifth goal with just 0.9 seconds left, which -- thankfully, for the Beauts -- didn’t give them quite enough time to complete the comeback.

Buffalo’s Kelley Steadman opened the scoring just 2:17 into the first period with her fifth of the season, assisted by Kourtney Kunichika and Corinne Buie. After Saturday's game, Steadman now has ten points in just five games this season.

The Beauts then went up by a pair on an even-strength tally scored less than halfway through the period by Devon Skeats, her first of the night. Emily Janiga and Jordyn Burns notched assists.

Harrison Browne, recently named to the NWHL All-Star Game, would make it a 3-0 game just 1:05 into the second period on a 2-on-0 shorthanded breakaway. (The NWHL scoresheet originally credited this goal to Kourtney Kunichika; she assisted, along with Sarah Casorso.)

Always a competitive team, the Whale rallied right back, getting on the board just 14 seconds later on Meghan Huertas’ first NWHL goal. Sam Faber and Micaela Long tallied assists.

.@Hueyy43 scores! Her first @NWHL goal. The Whale finally strike on the PP. 3-1. We've got a game. pic.twitter.com/Wv3HAx3NoT

Dana Trivigno added one fewer than three minutes later, and Long added her own goal late in the middle frame to tie the game at three. Again, special teams were critical, as two of the Whale's three second-period goals came on the power play.

The third period brought what was essentially a brand-new game. Corinne Buie gave her team a 4-3 lead on the power play, thanks to a nifty rebound in front of the net. Steadman and Casorso tallied the assists.

That lead wouldn’t last long, however, as Meagan Mangene scored shorthanded to tie the game at four.

The Beauts got lucky, scoring two quick goals to take a 6-4 lead over the Whale. Emily Janiga scored on a 5-on-3 advantage with a tip in front of the net before Skeats added her second of the night moments later, doubling her goal total for the season.

Connecticut got one back as Kelli Stack scored with 0.9 seconds left, but at that point, it was too little, too late, and the Beauts captured their first win of the 2017 calendar year.

Kunichika registered three assists in the win, while Steadman also had three points -- a goal and two assists.

The Beauts carried a short roster into Saturday’s game, with just 12 skaters. Shiann Darkangelo, Anne Schleper, and Megan Bozek were all missing from the lineup.

With those players missing (for unknown reasons), Beauts game day operations manager Linda Mroz suited up for the team in warmups, wearing jersey number 66. She did not play a shift during game play.

Amanda Leveille stopped 30 of 34 shots faced in the win, while goaltending for the Whale was split. Shenae Lundberg allowed two goals on four shots against in 11:55 before being pulled. Nicole Stock came in her relief, allowing four goals on 16 shots in 48:05.

The Whale/Beauts game ended up being the only NWHL action this weekend, as the Pride/Riveters game was postponed due to poor weather and travel conditions. The league will provide information about a rescheduled date and tickets will be available at a later time.

The NWHL returns to action this coming weekend, as the Beauts host the Riveters on Saturday night for a 7:30 PM game. The Whale will host the Pride on Sunday afternoon (3 PM).