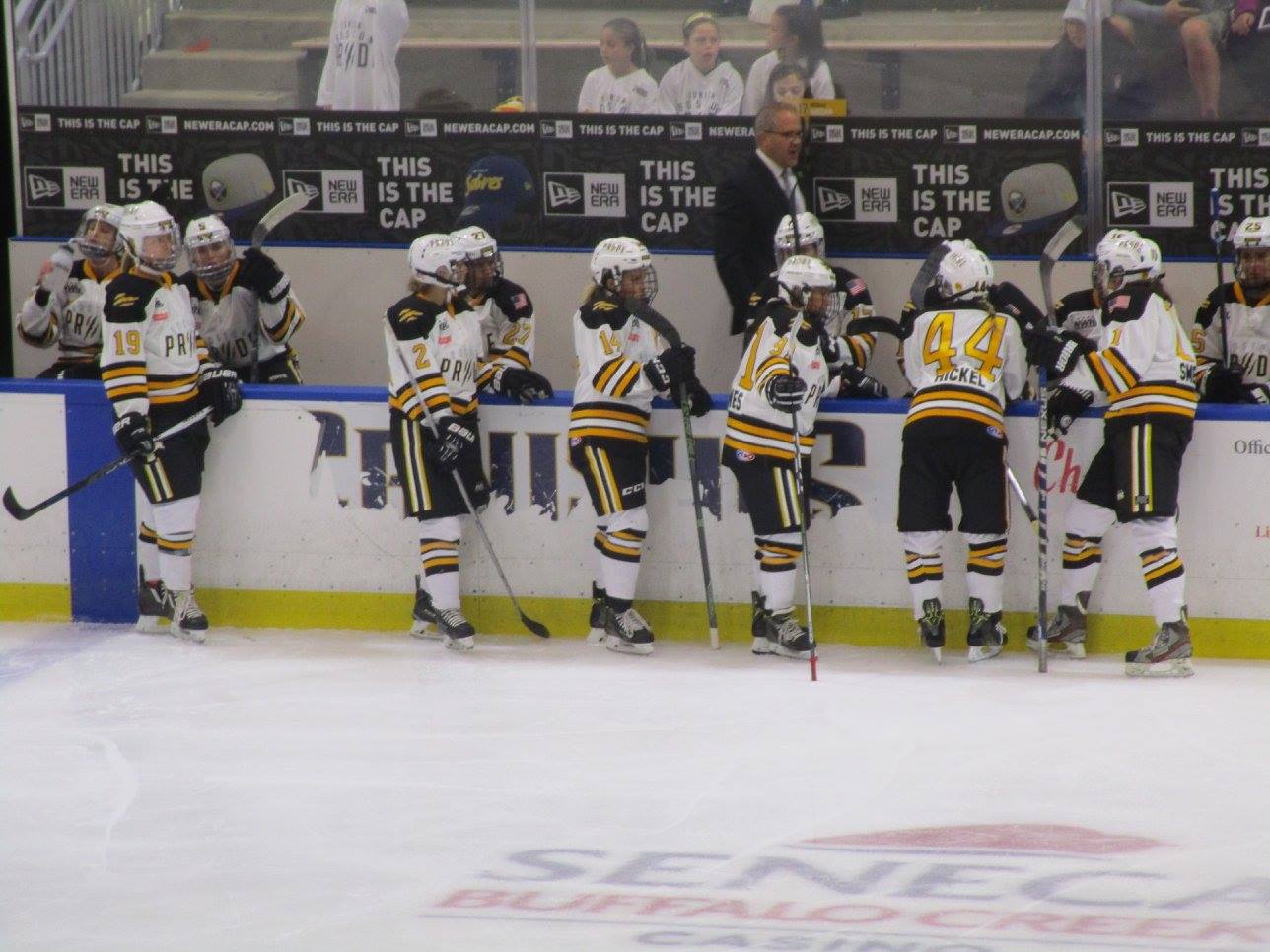 After nearly three weeks off, the NWHL will return to action on Saturday, January 7 with all four teams in action. The league-leading Boston Pride visit the New York Riveters for a 6:30 PM puck drop, with the Connecticut Whale hosting the Buffalo Beauts at 7 PM.

The Boston Pride remain undefeated this season, with a perfect 8-0-0-0 record and 16 points. They lead the league in goals-for (33) and are top in goals-against, having allowed just 10.

Overall, Boston is riding a 19-game winning streak that goes back to last season and includes both the playoffs and the Isobel Cup Final. The team hasn't suffered a loss since January 3, 2016, when the Beauts beat them by a score of 4-3.

The Pride haven't played in over a month, with their last game a close 3-2 shootout win over the New York Riveters on December 4. They gave up a 2-0 lead, with the Riveters' Bray Ketchum and Ashley Johnston tying the game at two. After no score in the overtime, Zoe Hickel scored the lone goal in a four-round shootout to give Boston the win.

It's only fitting, then, that they pick the season back up against those same Riveters, who are 3-5-0-1-1 on the season. The Riveters have allowed 33 goals-against this season, and have put up 25 goals themselves.

The Riveters' last game came on December 18, when they pulled off a 2-0 victory over the Connecticut Whale. After scoring under three minutes into regulation, they added another with less than a minute to play in regulation to secure the win. Sojung Shin recorded not only her first professional win, but also the second shutout in Riveters history.

Heading into Saturday's game, Alex Carpenter and Rebecca Russo lead their respective teams with 11 points each. Carpenter's five goals are second on Boston only to Brianna Decker's six, and Russo leads the league with eight assists.

Could this weekend see the return of Amanda Kessel to the Riveters lineup? Kessel has played just one game in her first NWHL season, a 6-3 loss to the Pride on October 8. Boston forward Hilary Knight also missed both of the Pride's last two games, so we'll keep an eye out for her return to the lineup as well. Both Kessel and Knight played in the December series with Team USA against Canada during the break in NWHL action.

After Saturday's game, the Pride and Riveters will face each other three more times, with their final meeting of the season coming in New York on March 12.

The Connecticut Whale head back into action in second place in the NWHL, eight points shy of the Pride with a 4-5-0-0-0 record. They've scored 27 goals this season and have allowed 29, second-least in the league.

After winning two straight, the Whale dropped the aforementioned 2-0 loss to the Riveters on December 18 to close out the calendar year. Saturday's game is the second of five consecutive home games for Connecticut, who just had their home-opener on December 10 at Northford Ice Pavilion.

The Beauts (3-5-0-0-1, 7 points, 24 GF/37 GA) have been back-and-forth this season. After an early December win over the Riveters, they fell to the Whale 6-1 on December 10 in their last game of 2016. Corinne Buie had the lone goal for Buffalo, while Nicole Kosta, Kelli Stack, and Sam Faber each had a pair of goals. Brianne McLaughlin had 36 saves, while Nicole Stock had 20 saves.

Of the three meetings between Connecticut and Buffalo this season, the Whale have come out on top twice. The Beauts captured a 5-4 win in the season opener, but the Whale triumphed in 7-5 and 6-1 wins as the season went on.

Heading back from the break, Whale forward Stack leads not only her team, but the league, with 12 points in eight games. Her six goals are tied for the league lead with Boston's Brianna Decker. Kelly Babstock and Nicole Connery each have six assists on the season, which are good for third overall in the league.

Shiann Darkangelo leads the Beauts with eight points (3-5) in nine games played, while Corinne Buie's five goals are tied for the second-most in the NWHL. (Alex Carpenter and Haley Skarupa also have five each.) Finally, Kelley Steadman is on a roll, with seven points (4-3) in just four games this season.

Saturday's game will mark the first for the Whale since captain Molly Engstrom announced her decision to leave the NWHL to play for Djurgårdens of the Swedish Women’s Hockey League. Check out The Ice Garden's interview with Engstrom following her announcement. The Whale also recently lost the talents of Ivana Bilic, who announced her decision to leave the league on December 12.

Following Saturday's game, the Whale and Beauts will face each other three more times -- three consecutive times, from February 26 to March 12.

The NWHL All-Star Weekend in Pittsburgh is just a few short weeks away. The Skills Showdown (February 11) and All-Star Game (February 12) are both being held at the UPMC Lemieux Sports Complex in Cranberry, PA. Kelley Steadman, who coaches at RMU, and Amanda Kessel, whose brother plays for the Pittsburgh Penguins, both have connections to the city. Tickets are available here.

On December 23, the league announced attendance-based bonuses for players. Players will share 100 percent of ticket revenue for all tickets sold over 500. For more information, see the league release here.

The league also announced its policy regarding transgender players last week. For further reading, and a link to the full policy, check out Andrew's piece on it.