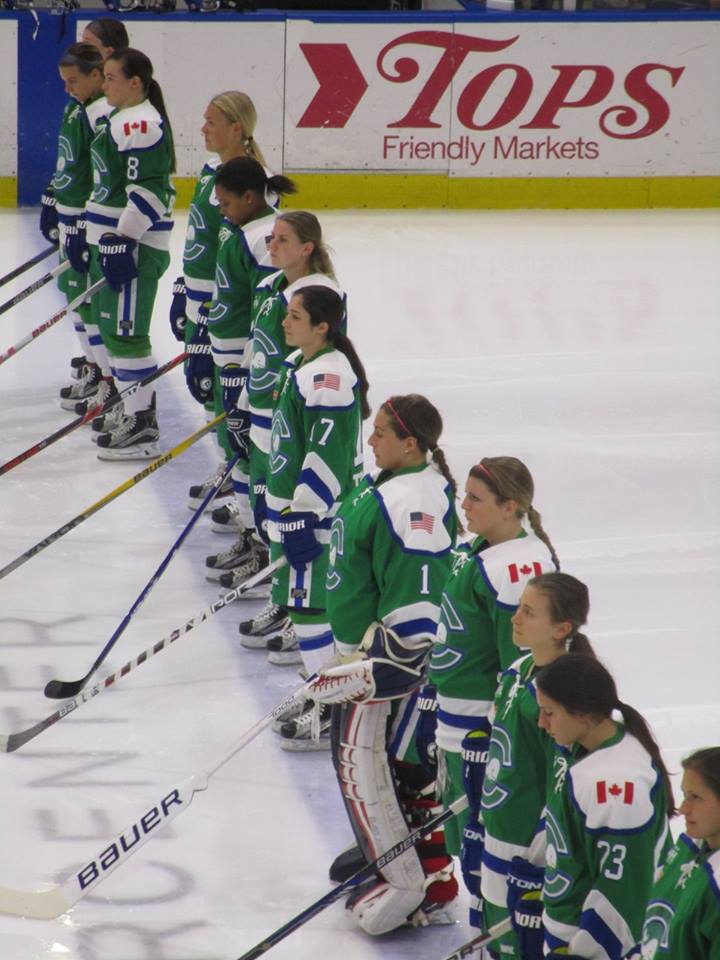 The Connecticut Whale captured a pair of wins this weekend in NWHL action, sliding into second place in the league overall.

With a decisive 6-1 victory over the Buffalo Beauts on Saturday, and a 4-2 win over the New York Riveters Sunday, the Whale are now .500 on the season with a 4-4 record, which is still eight points back of the league-leading Boston Pride.

Connecticut's weekend sweep began with their home opener in Northford, CT on Saturday, hosting their rival Beauts in front of a high-energy crowd.

Things kicked up when Kelly Babstock was called for an interference penalty with 13:17 to play in the first period. The Beauts were afforded an opportunity to strike early on the power play, but instead, Connecticut struck shorthanded to take the lead.

Nicole Kosta tallied her first of three goals on the weekend with a shorthanded breakaway, beating two Buffalo skaters to put the puck behind Brianne McLaughlin.

Less than three minutes later, Kelli Stack made it 2-0 for the Whale, beating Beauts defender Anne Schleper and releasing a close shot that bounced off McLaughlin's pad, then up and into the net.

The Whale never backed down, and just kept coming in the second period -- and part of that lies with the goaltending of Nicole Stock.

"McLaughlin is keeping them in it in the first period and most of the way through the second there. You're thinking, okay, it's only 2-0 and she's playing her butt off so you've got to make sure you keep it together on your end. You don't want to give up an easy one and let them back in," Stock said.

Sam Faber made it a three-goal game with a five-hole tally before Kosta struck again, shoveling the puck in after some good teamwork behind the net.

"We got a couple quick goals and just kept our foot on the gas, and we didn't really give them much opportunity," Faber said after the game.

Just like that, Buffalo found themselves in a 4-0 hole. They were given power-play chance after chance, with Stack, Long, and Babstock in the box, one after the other -- and eventually, it paid off. After a few shots, the puck got lost in the crease in front of Nicole Stock, and Corinne Buie shoved it in to put Buffalo on the board.

The Beauts have always been the Comeback Kids, but not this time. The Whale scored twice more in the third period, with Stack and Faber each getting their second goals of the game, en route to a 6-1 victory.

Stock had 20 saves in the win while McLaughlin stopped 36 shots.

"I thought we played great both ways. We had some good backchecks to get them off the board in that respect but offensively, I thought we transitioned really quickly. We're moving a lot faster than we had been," said Whale head coach Heather Linstad after Saturday's game.

"I don't think we gave the defense enough credit. I think [Ivana] Bilic [and] Shannon Doyle played really well, I think our D played well. They did all the right things, played well in our defensive zone, and really moved the puck quickly and let our forwards transition quickly," Linstad said.

Faber called Saturday's win the Whale's "best game" of the season, and both she and Kosta noted the home fans and their support as key factors in the victory.

The Whale rode the high of that win into Sunday's matchup with the New York Riveters, and it paid off in the form of a close 4-2 win.

Just as in the Buffalo game, the Whale struck first on a goal by Kosta, her third of the weekend. Her shot went through a pair of Riveters, a fellow Whale skater, and the goalie Fitzgerald before entering the net.

Up 1-0, the Whale found themselves in some penalty trouble once again, with Doyle and Kosta both off for quick consecutive calls. Unlike in the Buffalo game, however, they were able to kill them all.

The Riveters, who have proven themselves to be a dangerous team this season, rallied back in the second period with a pair of goals in 46 seconds. Taylor Holze tied the game after a nice pass and a tip in front of the net; Ashley Johnston gave her team the lead with a shot from the bottom of the faceoff circle.

The Riveters lead didn't last long, though, as Connecticut tied the game back up just 36 seconds later. Kelly Babstock ripped a slapshot from the top of the faceoff circle to make it a 2-2 game in the second period.

Just as in the Buffalo game the day before, the third period belonged to Connecticut. The Whale once again struck twice in the final frame, this time with goals from Babstock (shorthanded) and Nicole Connery.

That was all they needed to finish off the 4-2 win and close out the weekend with a sweep. After losing three straight, the Whale are now on a two-game winning streak and have evened out their season.

"We had to find our identity and find where our strengths are. I think we just needed those first couple games under our belt to really find out who we are and where we're going," Stock said.

The NWHL has just one game remaining in the 2016 calendar year: a matinee rematch between the Whale and Riveters in Connecticut on December 18. The league then returns to action after the holiday break on January 7, with all four teams in action.

Audio of postgame interviews with the Connecticut Whale provided courtesy of Dave Pendrys.