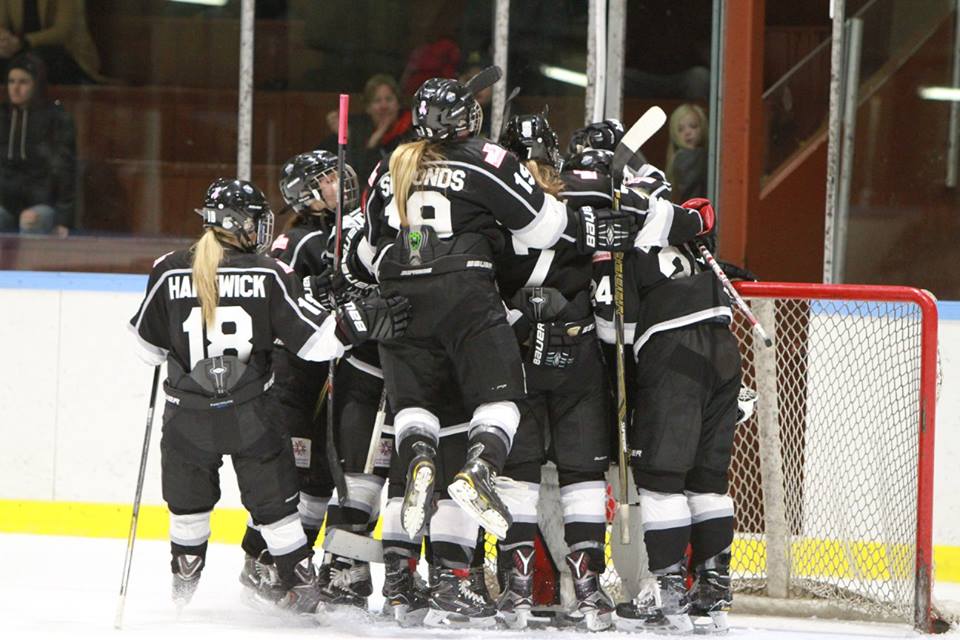 Another weekend of CWHL has shaken up the standings and left us wondering who the true powerhouse team is, if the CWHL even has one this year. Calgary swept Boston, but Brampton and Les Canadiennes split their series.

From a standings perspective, the Inferno are still at the top. Calgary has now stretched its lead to there points over Les Canadiennes, while the Furies -- who were off last weekend -- are six points out of first place. There's still plenty of time, though, for either Toronto or Les Canadiennes to catch Calgary. Brampton is 10 points out.

But from an on-ice perspective, Brampton's win over Les Canadiennes shows that the Thunder, who have struggled to win in the past, are still a good team. While Calgary has only one loss this year, it appears the CWHL is closer than last year in terms of having four solid teams that are close to each other.

Liz Knox earned the start for Brampton and made 35 saves, while Charline Labonte stopped 19 shots. Ouellette and Jones each posted three points.

"We had to stop a lot of pucks and the [players] did that," Brampton head coach Tyler Fines said. "Erica [Howe] and [Liz Knox] and our penalty killers were amazing. They saved our butts.”

Sunday's affair was extremely similar. The teams each scored a goal in the second and third frame to force overtime. But in this game, it was Brampton's Jamie Lee Rattray who earned the game-winning goal.

“We lost a lot of 50-50 battles and just have to be a little tougher on the stick so we can create more opportunities," Fines said.

“In both games we really had a slow start, which did not help," Les Canadiennes' assistant coach Lisa-Marie Breton-Lebreux said. "I don’t know what’s happening in the first period. We lack team cohesion, we lack execution, we’re a bit slower. ... Brampton is a very good team so the reality has changed for us and we have to accept it and work harder, because in the past we often had an easier way in season.

"Last year we only had two losses in a year; now we already have three and it’s half the year, so the reality has changed this year in the league. Toronto, Brampton, Calgary will be very strong, which is actually a really good thing; we’ll be able to face more adversity, which will make us stronger. Last year our lack of adversity really showed in the last game, so I think that’s a good thing."

Calgary's offense broke out against Boston. The Inferno posted 14 goals over the weekend, following a 5-1 win with a 9-2 victory. Meghan Grieves scored Boston's lone goal on Saturday, while Iya Gavrilova scored twice. Boston's Lauren Dahm faced 52 shots, stopping 47 of them. In net, Genevieve Lacasse made 10 stops against her old team.

"Our [players] did a good job transitioning to offense and created some pretty good, probably one of the best games we’ve had in terms of rush-generated offense," Blades head coach Brian McCloskey said. "I thought that was a plus [and] I also thought we did a good job making some improvements, especially shorthand."

Calgary captain Brianne Jenner scored the hat trick on Sunday, while Bailey Bram posted two goals and Rebecca Johnston added three points. Grieves scored her second goal in as many games, while Nicole Giannino added a tally for the Blades.

"Early in the first game of the weekend, I think we were extending our defense a little too far to the perimeter and fortunately for us Lauren made some great saves," McCloskey said. "But I thought as the weekend wore on, we did a pretty good job of understanding how to protect in from the dots in and not getting ourselves extended too extensively beyond the outside areas."

Jetta Rackleff and Dahm split the goaltending duties for Boston. Rackleff made 27 of 34 saves, while Dahm had 22 out of 24. Delayne Brian continued the Calgary rotation and stopped 16 shots.

“Meghan in particular had a standout weekend," Blades coach Brian McCloskey said. "She had a lot of good scoring chances. Her, Kate Leary, Kristina Brown; that line we put together this weekend, they had some really good opportunities offensively."

↑ Carly Hill and Lauriane Rougeau: After missing a few games with injuries, both Hill and Rougeau are back in the lineup.

"Carly Hill is coming back and she’s building her confidence back," Breton-Lebreux said.

↑ Brampton Thunder: It seems like Brampton struggled to win early on, which was surprising for a team that everyone thought could compete for a top spot. But the Thunder have still been good all season and have proved it, after earning wins over Calgary and Les Canadiennes in the last two weeks.

Brampton is still a little far behind in the standings -- losing the first four games of the season will do that to you -- but there's plenty of time for the Thunder to make up the difference.

“Chemistry kicked in," Fines said. "We started to score a few more goals. You have to score three goals or more to win in this league, and if you do that you give yourself a chance to win. Our offense came alive and we just started playing a little more structured hockey.”

↓ Boston on the rush: I really like Boston's breakout. I think the Blades showed that they've gotten better offensively with the chances they were able to create, especially on the odd-player rush. However, the Blades spend a lot of time chasing the puck, and that especially hurts in aspects like the breakouts. The Blades are usually too gassed to finish their breakouts ahead a player, or are too tired to make a quality scoring chance from that breakout.

"One of the things we’ve done in the past is you're not getting the quantity of transitional offense your opponent is, and then all of a sudden you get a chance and the way you go 3-on-2, 2-on-1 [and] we have a tendency to try and be too cute," McCloskey said. "We stress to the team over the weekend [that] when we get those chances, you’ve got to put the puck on net and force the other team to make a save [and] potentially clear a rebound."

The only way this gets better is if Boston stops chasing the puck more. But that's hard to do, since their defense still needs so much improvement. While the chances the Blades give up may have lessened, the amount of time they spend chasing the puck tires them out.

But their offense isn't what this blurb is about -- it's more about the defensive side of their transition game, another issue that occurs when Boston has the puck on the rush, but can't convert.

"We’ve gotten better, but I think it’s an area where we can continue to improve, where everybody realizes that we have to transition quickly to defense," McCloskey said. "And determining who’s got [which] individual assignments in terms of defensive play and picking up on a counterattack because Calgary, and we’ve got Montreal coming up this weekend, they’re both really good counterattacking teams. If you turn the puck over and you don’t transition quickly to defense, they’re going to really expose us."

“We’ll need to work on our PK and as well as just to get the scores...We need to get the scoring game, [the] finishing touch. It’s not bad in the O-zone, but we couldn’t finish.”

↓ Calgary's power play: As mentioned just above, the Blades killed off almost all their penalties...which means that Calgary scored just one goal in nine tries. The Inferno entered the weekend with the second-best power play unit, although Calgary was only 0.8 percent above Toronto and almost 11 percent below Les Canadiennes. On the road, however, Calgary has one of the league's worst power plays.