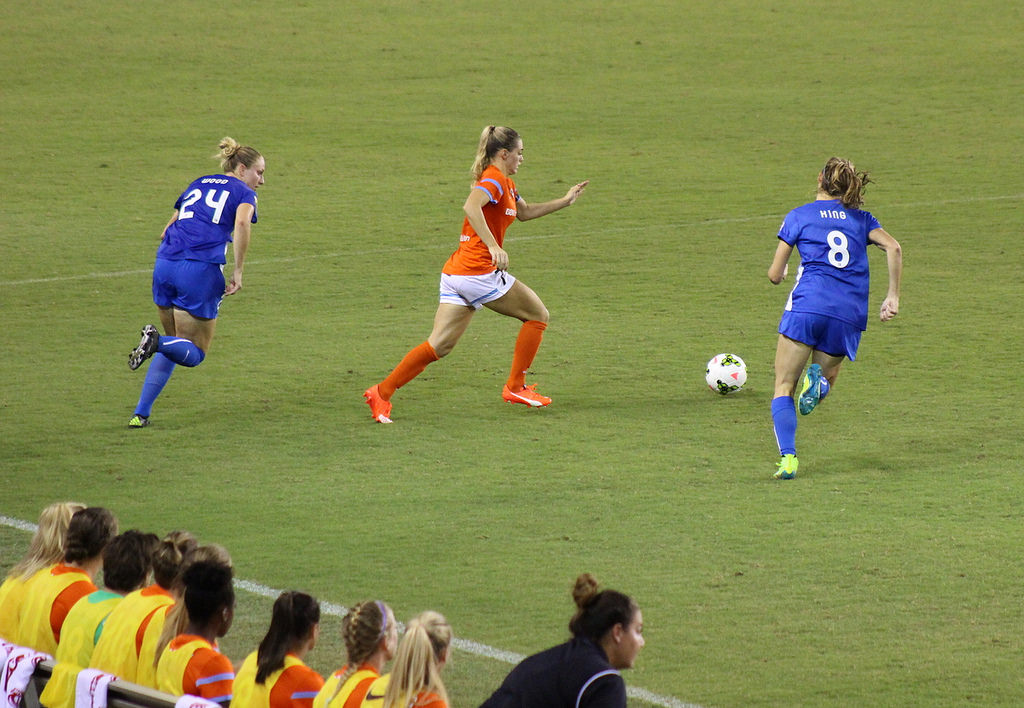 The 2016 National Women’s Soccer League season is now upon us, and a new season brings new opportunities. Will we see the same stars shine again for a fourth season, or will some new stars take their place? It’s a question that can’t be answered right off the bat, but it’s one to keep in the back of your mind. To help commemorate the league’s fourth season, here are four players to keep your eye on this season who might have previously flown under the radar.

She’s won two Women’s World Cup championships. Her first came as a member of the 2008 United States U-20 squad in Chile. In those five games, she posted a 5-0-0 record, earning a clean sheet against France in her debut. She also won the Golden Glove in that tournament. The second time was as a member of the 2015 US Women’s National Team that took it all in Canada last summer.

Naeher headed to Chicago in a trade this past November. The Red Stars acquired her for Whitney Engen, along with a few draft picks. Her fourth season in the NWSL could be considered a fresh start for Naeher. Despite the stats, she’s a solid goalkeeper of a high caliber who will most likely replace the newly retired Karina LeBlanc. Having kept Boston in many of its games, trading her was a gamble for the Breakers, but was a great acquisition by the Red Stars.

2010 NCSAA National High School Player of the Year. Two-time Gatorade state player of the year. Utah Ms. Soccer 2008 and 2009. Those are just some of the achievements that Kealia Ohai had tucked under her belt before she started college at the University of North Carolina, Chapel Hill. During her freshman year at UNC, she scored a career high 14 goals and nine assists. The end of the year saw her named to the first All-ACC team, first NSCAA All-Southeast Region team, ACC All-Freshman team, first Top Drawer Soccer All-Rookie team and got her first-team Soccer America All-Freshman Team honors. 2011 marked Ohai’s second year as a standout at UNC, where she scored six goals, made six assists, and was the second leading scorer on the team with 18 points.

2012, Ohai’s junior year, saw her score nine goals and five assists in 17 games for the Tar Heels. It also saw her named the Most Valuable Offensive Player in the NCAA College Cup tournament, where UNC took home the title. She was also a semi-finalist for the MAC Hermann Trophy. Her senior year was marked by 11 goals and seven assists, as well as earning the Senior CLASS Award winner as the most outstanding senior student-athlete in Division I women’s soccer for notable achievements in classroom, community, character and competition. In 2014 Ohai was drafted second overall by the Dash in the NWSL College Draft. She appeared in 17 games for the Dash that year, starting in 15. She tallied three goals, her first professional goal coming against the Western New York Flash on May 31, the next two coming against the Boston Breakers on July 11. She also tallied one assist. 2015 saw Ohai start in all 19 of her appearances, score four goals, tally five assists, and earn the team’s MVP award and Players’ Player of the Year award. It also saw her tied for the second most assists in the league.

In addition to an extensive career with the Tar Heels, Ohai has experience on the U-20 team, where she led the United States to victory in the 2012 U-20 Women’s World Cup by scoring the winning goal in a 1-0 game against Germany. All things considered, it’s safe to say that Ohai’s just getting started, with her junior season with the club and the league approaching.

Michelle Betos got her NWSL start with the Seattle Reign FC in 2013. In that season, she made seven appearances, all starts, and 34 saves. 2013 saw her traded to Boston after the season (along with midfielder Kristie Mewis), and she saw time in two UEFA Women’s Champions League matches. In 2014, in a draft-day trade, Betos moved to the Portland Thorns, joining Nadine Angerer as Portland’s goalkeeper. Her first NWSL win came with the Thorns on June 15 of that year, in a match between Portland and the Washington Spirit. The win was also her first shutout. Her Thorns FC debut came during a match between the Thorns and Western New York Flash on June 7; Betos logged 63 minutes in that match. Her season-high four saves came in another match with Washington, where Portland won the game 6-1.

2015 was Betos’s best year yet, coming in the form of hardware and even a goal. Statistics-wise, she appeared in in 14 of 20 matches with Nadie Angerer on national team duty, earned two shutouts, registered a new season high and tied her NWSL career high with eight saves in a match against Washington on May 30. She became the first goalkeeper in National Women’s Soccer League history to score a goal when she drove home a diving header against FC Kansas City to equalize the game in the 95th minute on June 19. That goal got her on ESPN's Sportscenter Top 10. At the end of the year, Betos had a career high of 45 saves, was named to the NWSL’s Starting XI, and earned the title of Goalkeeper of the Year for the league, as well as Thorns FC Supports’s Player of the Year.

With Nadine Angerer’s retirement, it’s safe to say that Betos will step up into the number-one spot for the Thorns. Disregard Portland’s record -- when you take her stats into consideration, Michelle Betos can do a lot with the opportunity that’s opened up for her.

Erika Tymrak may be best known as the FCKC player who gets fouled on the most, but that’s not the only thing she’s got going for her. In her rookie season in 2013, Tymrak was named NWSL Rookie of the Year and was also named to the league’s Second Best Starting XI. She recorded six goals and four assists in 21 games, with 16 of those being starts. 2014 saw her score four goals and tally four assists in 22 matches for the FC Kansas City Blues, logging 1540 minutes as a key player on Coach Vlatko Andonovski’s offense.

In 2015, she continued that key role, scoring two goals against the Boston Breakers in a 3-2 FCKC win on July 9. Her third goal of the season came in a shutout against Portland on August 22. Her fourth and final goal of the season wouldn’t come until the playoffs, but it was a goal that helped the Blues secure a win against the Chicago Red Stars and go on to eventually win it all. It should also be noted that Tymrak was on both championship winning FC Kansas City teams.

With FCKC’s dynamic duo of Lauren Holiday and Amy Rodriguez off the field this year (Holiday has retired and Rodriguez is currently pregnant), it opens up the pitch for players like Tymrak to put the ball to the back of the net. Whether the opportunity comes for Tymrak in particular, or whether or not Tymrak is a key player on Andonovski’s offense for a third season in a row remains to be seen, but it's a strong possibility that she will rise to the occasion.