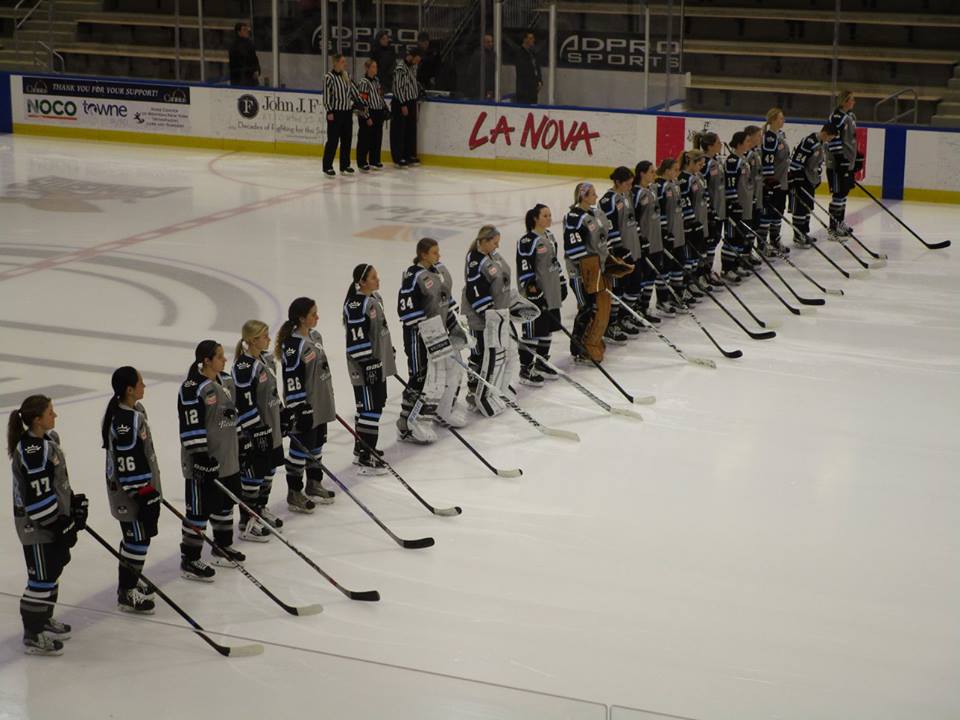 For the Buffalo Beauts, the inaugural NWHL season wasn't about instant chemistry or instant success. It was about a group of women working hard over the course of the season and eventually coming together as a team, never giving up and finding their way.

In the end, the Buffalo Beauts fell just short of an Isobel Cup win, but the growth of the team over the course of the inaugural NWHL season is an essential piece to discuss when reflecting back on the year.

When the season began, the Beauts were literally an incomplete team, missing several Canadian players due to visa issues. Players like Devon Skeats, who would prove to be a great contributor, missed the first three games of the season.

While we can't say that this was the sole reason for the Beauts' troubles, it was certainly part of why Buffalo struggled early on. The Beauts needed time to come together as a team, to get used to each other. They lost each of the first five games, three of which were against Connecticut.

“Every period, we got better. We learned how to play with each other. We’re still building a team.”

This would be a theme that would echo throughout the season for the Beauts. Two weeks later, Paige Harrington said "It feels like we're starting to come together as a team," and as the season went on, more players echoed those sentiments.

Those first games included the first-ever goal in Beauts history, scored by practice player Kelley Steadman -- a player who would turn out to be a huge part of the Beauts' lineup throughout the year.

The @BuffaloBeauts are on the board. Kelley Steadman (@ksteadman9) records the first Beauts regular season goal. pic.twitter.com/ulOhiXXWBe

Buffalo finally found their first franchise win in a 3-1 victory over the New York Riveters on November 29.

But it would then take them another month -- until January 3 -- to end up on the winning side again. Some of the games were close; others, not so much. It would take until January 31 for the Beauts to get their first win on home ice.

In the end, eight of the team's 13 losses came by just one goal, including three shootouts and one overtime loss.

The Beauts went 1-5 against Boston; 0-6 against Connecticut; and 4-2 against New York over the course of the regular season. They finished the season with a record of 5-9-0-4 and were third overall in the league when all was said and done.

This put Buffalo in a seemingly less-than-ideal situation facing Connecticut in the playoffs -- the team they'd struggled against the most in the regular season.

But against all odds, the Beauts pulled it off, knocking off the Whale in three playoff games. This gave them a spot in the Isobel Cup Final, where they eventually fell to the Boston Pride.

The season also saw the Beauts host the first-ever NWHL All-Star Game and Skills Competition at HARBORCENTER in downtown Buffalo.

It'd be hard to reflect on the Beauts' season without talking about Steadman. Signed as a practice player due to her work schedule with Robert Morris, she proved to be a vital part of the roster, as she led the team in scoring through the regular season. She registered a team-high 20 points, including 13 goals, despite playing in just 10 games.

Kourtney Kunichika, a former RIT Tiger, was also great offensively for the Beauts, putting up 17 points in 18 games. She was one of just four players to appear in every regular-season game, along with Hailey Browne, Hannah McGowan, and Paige Harrington.

Forward Meghan Duggan averaged more than a point-per-game during the regular season, with 16 points (6-10) in 13 games. She missed several games due to her coaching schedule with Clarkson.

Finally, I need to highlight two more players: Devon Skeats and Megan Bozek. Skeats was a power forward who showed great personality on and off the ice; speed and strength were her big skills. Though she missed the first few games due to those visa issues, when she did play, she was on point, grabbing 14 points (9-5) in 15 games.

And how can I not mention the infamous Boz Blast? Megan Bozek's slapshot from the point was an absolute demon throughout the season for opposing teams, and into the playoffs. Even if it didn't hit the back of the net... well, let's just say I certainly wouldn't want to get in front of that shot.

Overall, Brianne McLaughlin carried much of the goaltending workload for the Beauts, appearing in 14 of 18 games. Amanda Makela, one of the visa-affected players, ended up playing in six games, while Kimberly Sass played twice.

McLaughlin ended the season with a 3.41 GAA and .907 save percentage. She faced 443 shots throughout the season and was often a key factor in keeping Buffalo in the game. Especially early on, she faced a heavy workload on some nights; for instance, McLaughlin faced 147 shots on goal in the first three games of the season alone.

Here's a quick video from back in October when Browne and Harrington joined a local Western New York radio show:

The Beauts have five draft picks who could potentially join the team next season, starting with goaltender Amanda Leveille, who just won the NCAA National Championship with Minnesota. The Beauts also have forwards Emily Janiga and Jenna Dingeldein, both of whom won the College Hockey America championship with Mercyhurst this season. Dingeldein had the championship-winning goal in overtime.

They also have defender Courtney Burke from Wisconsin and forward Sarah Lefort of Boston University.

The Beauts had one heck of a season and really started to come together just in time for the end of it. It'll be interesting to see how this momentum can translate over into next season (depending on which players return, since, of course, everyone was on a one-year contract), and if Buffalo can find their way to the top of the league in the years to come.