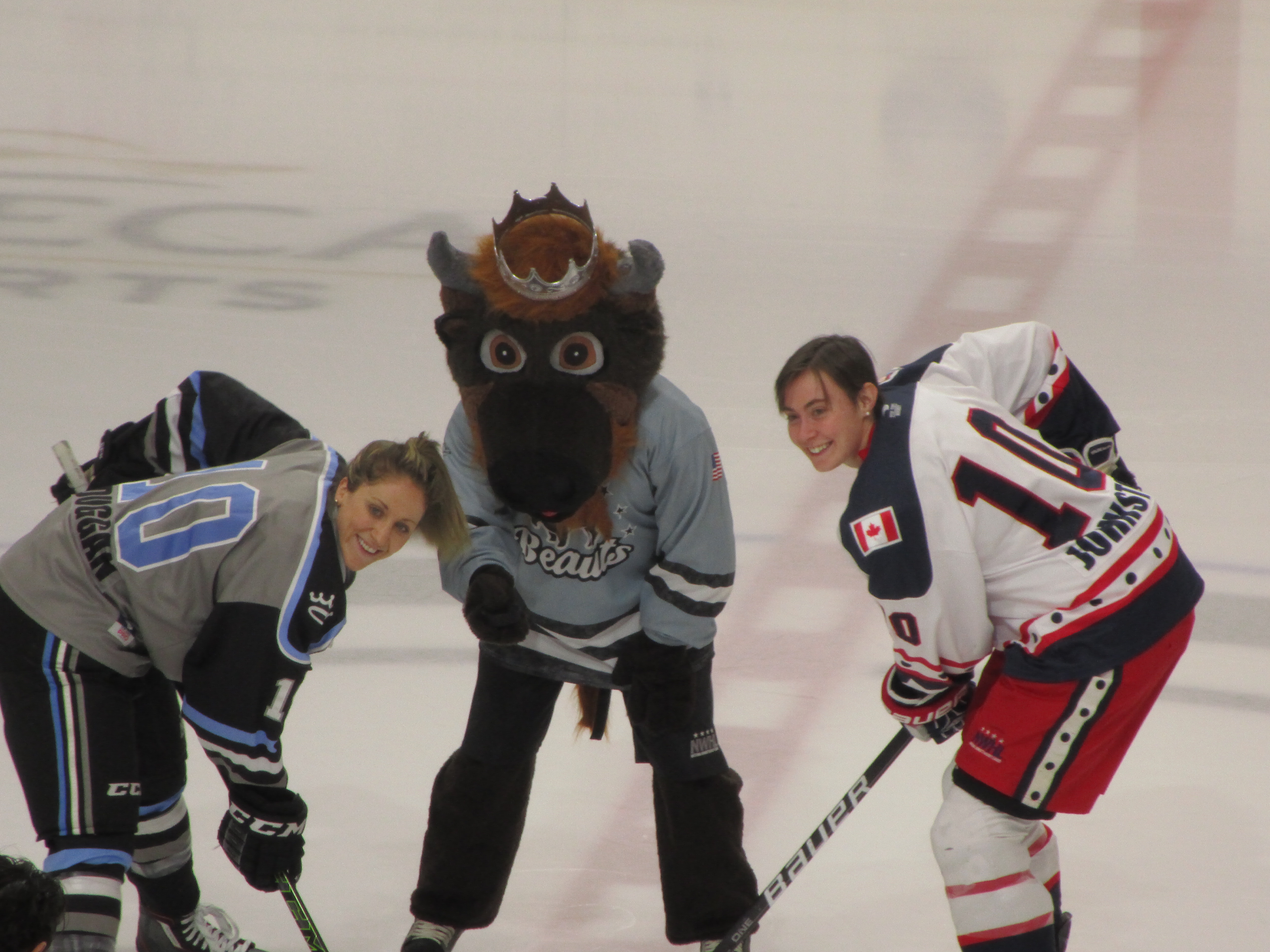 A strong third period pushed the NWHL's Buffalo Beauts to a 5-1 victory over the New York Riveters on February 21 at HARBORCENTER.

Prior to Sunday's game, the Buffalo Beauts introduced their first-ever mascot, becoming the first team in NWHL history to do so.

The buffalo, whose name is "KRUSHER," features a silver crown atop its head and wears a Beauts jersey, of course. The mascot was donated to the Beauts by K.I.A. Memorial Road March, an annual 10K through a local park designed to honor fallen military members.

Sunday's game featured Brianne McLaughlin and Nana Fujimoto facing off at opposite ends of the ice. Both played sharp games, and Fujimoto worked hard to keep the Riveters in it, even when the team in front of her failed.

Megan Bozek put the Beauts on the board just over halfway through the first period with a blast from up top that went through a Riveters' legs, past Fujimoto and into the net.

After a fairly tame opening period that saw the teams combine for just 12 shots on goal, the second period started off with a penalty shot being awarded to New York's Bray Ketchum. She picked up the puck, took it in, and went top-shelf on McLaughlin to tie the game at one.

Later in the middle frame, Meghan Duggan notched her fifth goal of the season with a beautiful play where she out-battled a Riveters player all the way from the blue line to the bottom of the face-off circle before shooting it in behind Fujimoto.

At the end of two periods, the Beauts held onto a 2-1 lead over the Riveters, with shots even at 15 apiece.

However, the third period would make all the difference.

About halfway through the final frame, Tatiana Rafter potted her second goal of the season after Fujimoto gave up a big rebound. Rafter, coming in front of the net, scored on the backhand to put the Beauts up 3-1.

Just moments later, Buffalo went up 4-1 on Kourtney Kunichika's ninth goal of the season. Kunichika chipped it out in front and, with Fujimoto down in a split, had the open side of the net to slide the puck in.

Kelley Steadman sealed the deal with an easy empty-net goal for her team-leading 13th goal of the season to make it 5-1.

After missing the last two games, including one due to illness, Meghan Duggan returned to the Beauts lineup in a big way. She had a goal and an assist in Sunday's win and was named the first star of the game.

"She forechecks, she backchecks, she earns her paycheck," said Beauts GM Linda Mroz of Duggan's play this season, while Hailey Browne called Duggan the "all-around player."

Megan Bozek had a goal and two assists and was named second star, while McLaughlin, with 17 saves, got third-star honors.

Buffalo Beauts captain Emily Pfalzer noted that the team's speed and quick decision-making were two factors that helped them seal the victory.

"Everyone had a great game, and it was awesome to see everyone produce," Pfalzer said, also noting the focus on defensive play that helped limit the Riveters' chances.

Hailey Browne spoke of the Beauts' work to get the Riveters isolated and moving out before taking the puck up through the middle.

The Beauts' win allowed them to clinch third place in the NWHL, meaning the Riveters will finish the season fourth overall.

Also, with Boston winning earlier in the day, the Pride clinched first place in the league, putting the Connecticut Whale in second.

Those results combined mean that we now have solidified playoff matchups for the NWHL. The Pride will host the Riveters, while the Whale host the Beauts, both in best-of-three series.

The Beauts certainly seem ready to face the Whale in the upcoming playoffs.

"We've had some close games, so we're ready to bring it to them," said Beauts captain Pfalzer about the team's upcoming match with the Whale.

"Psyched," Browne said of the Beauts having to face Connecticut.

"We want some retribution for all the stuff we had to go through playing them, OTs, shootouts," Browne said.

Regular-season games between the Beauts and Whale were kept close through the season, and the teams will surely face a tight battle for a chance at the Isobel Cup Finals.

For now, however, the Beauts will finish out the regular season by hosting the Boston Pride for their final home game of the season on February 28. The Whale and the Riveters will face off later that evening.