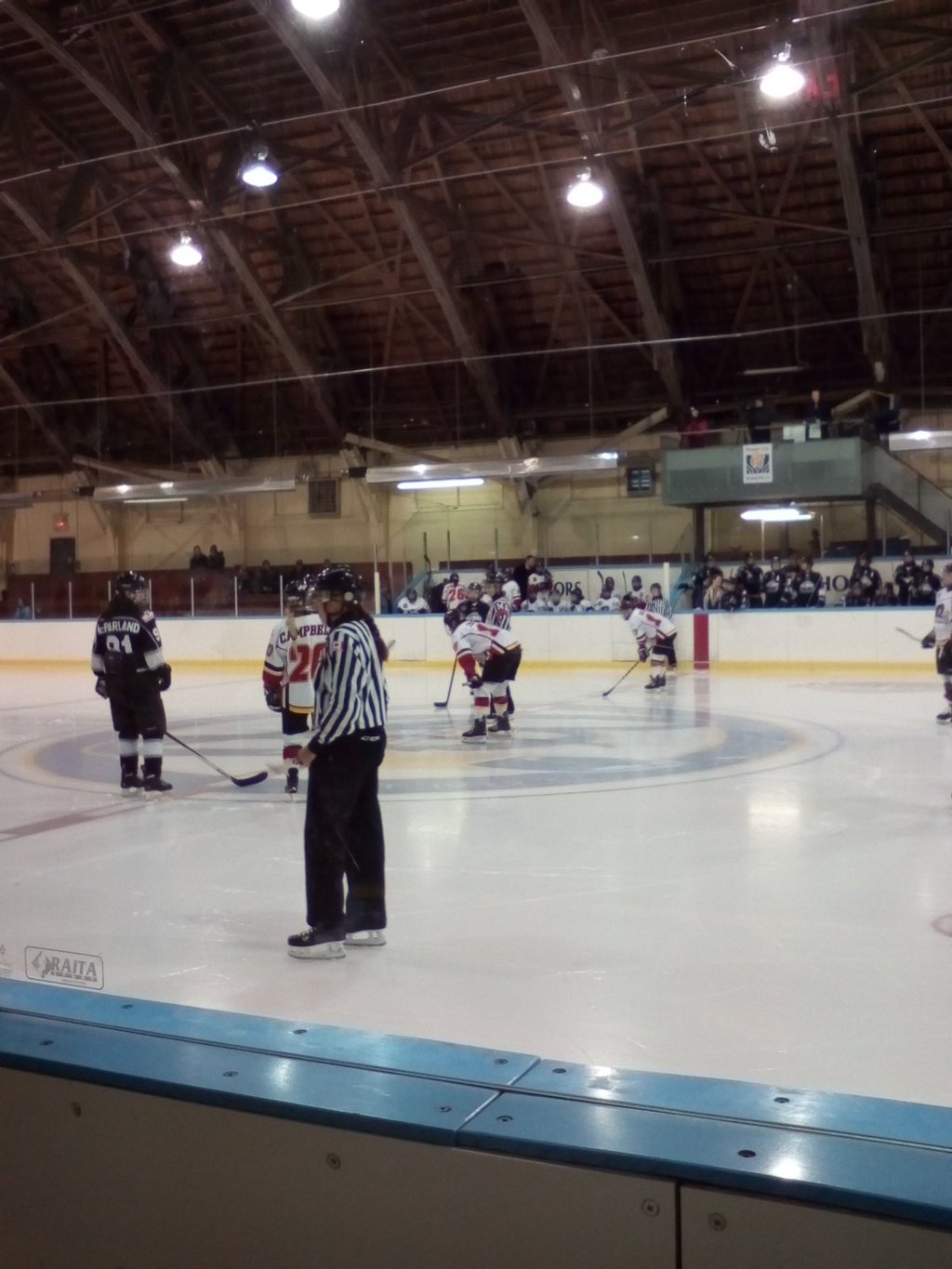 While Les Canadiennes and the Furies ended in a series sweep, the Calgary-Brampton set featured a few wild games and a thrilling finish on Sunday.

After the weekend, Calgary and Brampton sit on top of the CWHL, tied with 25 points, while Les Canadiennes are second with 24.

On Saturday, Les Canadiennes struck first with Lauriane Rougeau's goal. Alyssa Baldin tied it before the first period finished, but the rest of the game was all Les Canadiennes. Ann-Sophie Bettez, Emmanuelle Blais, Kim Deschenes, and Katia Clement-Heydra also scored for Les Canadiennes, who won 5-1.

Les Canadiennes assistant coach Lisa-Marie Breton-Lebreux said the team adjusted well to the Olympic-sized ice, but the sheet and fatigue from playing so many games last week also hindered the team.

"[We need to] work on our execution," Breton-Lebreux said. "I think maybe coming back since Christmas we need to get back to the basics and really work on executing [the] little things well like the passing, and the shooting, and the support, the breakouts."

Charline Labonte finished with 23 saves, while Christina Kessler made 25 stops for Toronto. Bettez netted three points in the game.

"The one thing we’re looking or from these [players] is consistency, and we’re not getting that for 60 minutes," Toronto coach Sommer West said. "When you don’t do that in this league against a good team like Montreal, they’re going to make you pay the price."

The next day featured a 3-1 win for Les Canadiennes. Toronto's major threat, Natalie Spooner, struck first. Bettez tied the game, followed by goals from Deschenes and Clement-Heydra. Labonte made 21 saves and Kessler made 30.

"On Sunday we were playing pretty well, but when you make those little mistakes that we seem to keep making every game, they put the puck in the net and they make you pay for it," West said.

"If [Carolyne] Prevost makes a mistake, if her linemates aren’t available and in their spots to help, then it’s just a really bad domino effect and that happened to us a couple times on Sunday. When we got behind, it was hard for them to get back into it."

Brampton's hot streak continued, as the Thunder extinguished the fire on Saturday and battled back for the shootout win on Sunday.

Delayne Brian made 27 saves for Calgary, while Erica Howe stopped 30 shots. Howe's play earned her the start for Brampton on Sunday, which broke the usual Brampton goaltending rotation.

Sunday's game started with a Jill Saulnier goal 28 seconds into the game. Jenna McParland tied it in the first, but it was all Calgary for the rest of the period, as the Inferno added two goals.

"Unfortunately on Sunday it wasn’t [Howe's] best game, but [Knox] came in and gave us a bit of a boost, and that’s really what I was looking for," said Brampton head coach Tyler Fines. "Once we made that change, we saw a little bit of a jump step because we knew that it really wasn't Howie’s fault. We just weren’t playing well enough in front of her. Then all of a sudden, the change of goaltenders gave us a boost."

After Brampton was down by a few goals, Fines told his team that bounces were falling in favor of Calgary.

"[If] we kept working hard, we would end up coming back, no matter what the score was," Fines said. "And that’s exactly what happened."

The Thunder scored twice in 20 seconds to cut the game to 5-3. Calgary responded with a goal to bring the score to 6-3, but Becca King and Jamie Lee Rattray scored in the second half of the second to cut it to 6-5.

In the third, Lacquette added another goal to push Calgary's lead to 7-5. It seemed like the game would be Calgary's, but Brampton's Laura Fortino scored twice in the second half of the period to tie the game at 7-7.

Lacquette and Fortino both finished the game with four points, while Rattray scored the only shootout goal.

↑ Brampton: The Thunder are no longer quietly one of the top teams in the CWHL. The Thunder have now beaten both Les Canadiennes and the Inferno, the league's preseason favorites.

And a sweep (or a win and a tie, if you don't like shootouts) over the deep Inferno says a lot about Brampton.

"We felt we controlled most of the game both nights. They had their odd rushes," Fines said.

"I think we’ve been confident a long time -- it’s just we were finally starting to show how good of a hockey club we are. It’s just now, can we do it against the top teams going forward day in, day out.”

↑ Laura Fortino: Fortino had two huge goals for Brampton, scoring the team's sixth and seventh tallies less than eight minutes apart to send the game to overtime. The defender is on a four-game point streak with nine points over the stretch, and seven of those points came from the weekend.

Fortino has 22 points and is both Brampton's leading scorer and the league's leading defensive scorer.

↑ Charline Labonte: With Les Canadiennes, it's easy to focus on scoring -- especially thanks to the trio of Ann-Spphie Bettez, Caroline Ouellette, and Marie-Philip Poulin. But Labonte has been solid in net, leading the CWHL with a .931 save percentage.

And Labonte flashed some leather on a dangerous Natalie Spooner scoring chance over the weekend:

"We keep working on it, keep showing them video, keep talking to them," West said. "When a big piece of our puzzle for the power play is [Jennelle] Kohanchuk, who is a great quarterback for that situation and you don’t have a player like that who can lead your team in that direction, who can quarterback that power play, sometimes it can hinder it."

The Furies have the league's second-to-last power play, converting on only 10.98 percent of their chances.

"The days that we have success is when we start to use each other and find open lanes and things," West said.

↓ The security of the two preseason favorites: Before the season started, Les Canadiennes and Calgary were hailed as the league's best. The Thunder were entering the season with a new bench boss, and their future was uncertain. Once the season began, we learned that the Inferno and Les Canadiennes are two of the top teams, mixing depth, solid offense and goaltending.

But now we know the two teams have weaknesses. The Thunder have beaten both the Inferno and Les Canadiennes, chipping away at their weaknesses. It's an exciting time for the CWHL, which is rapidly seeing Brampton contest for the top spot.

↓ Defense: Charline Labonte and Les Canadiennes were the only team this weekend that didn't allow 10 goals. Toronto allowed 8, Brampton 10, Calgary 12.