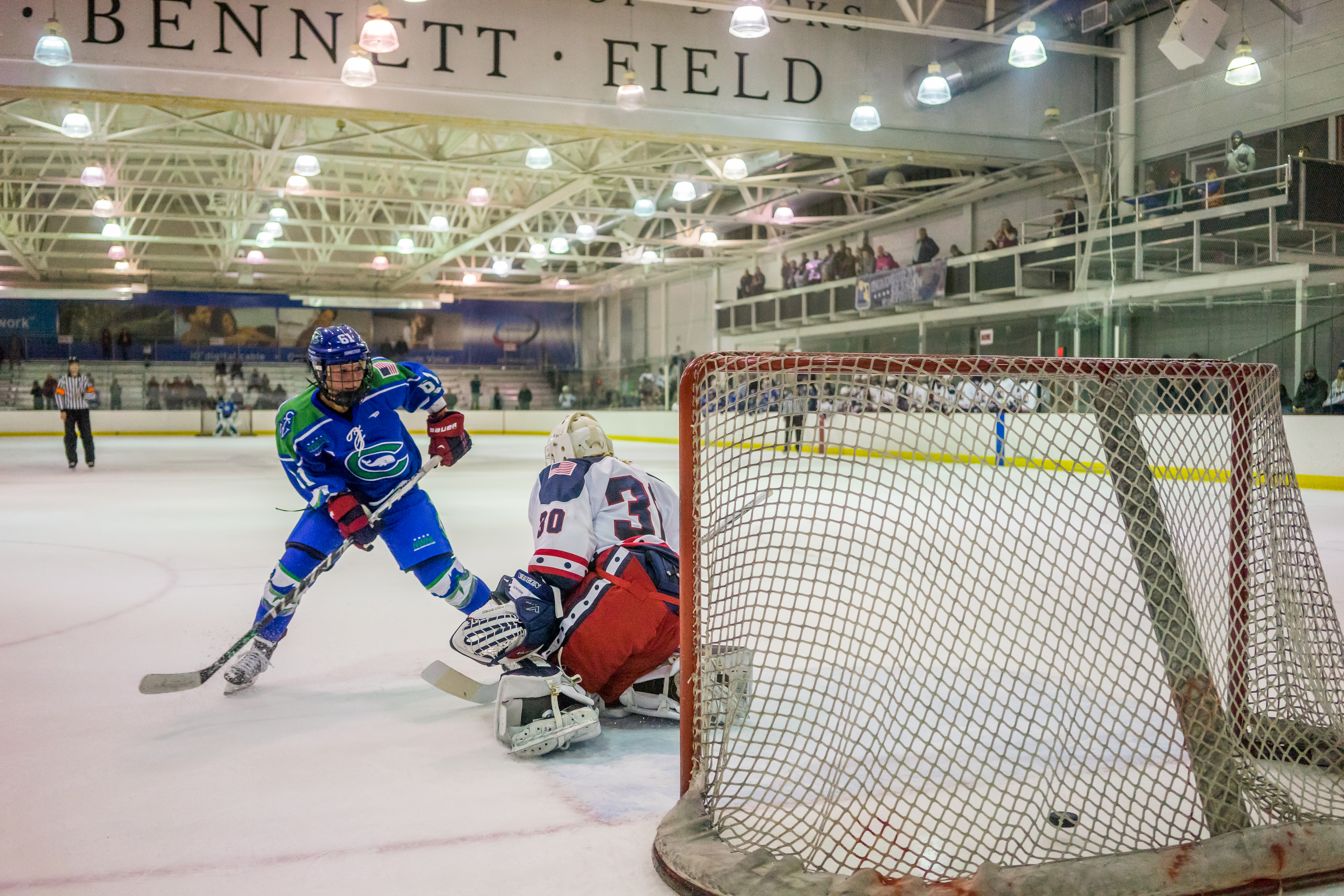 The Connecticut Whale came to Brooklyn this past weekend, and after 40 minutes, it looked like they might actually lose a game.

The Riveters had the better end of the back-and-forth action in the first period, as Jenny Scrivens got her second straight start for New York and made a few great saves early in the game.

Halfway through the first, Janine Weber fed Bray Ketchum in the slot from the goal line, who put a bulls-eye past Jaimie Leonoff to give the Riveters a 1-0 lead.

On the power play in the final minute of the first, it was Weber again, setting up Morgan Fritz-Ward to put the Riveters up 2-0.

The Whale and Jaimie Leonoff found themselves in their biggest deficit of the season when Bray Ketchum scored her second, assisted by Brooke Ammerman, five minutes into the second period. Scrivens continued to shut the door on many chances for the Whale, who were outshooting the Riveters 26-21 after two.

The final 20 minutes of the game were a steady comeback for Connecticut. Yekaterina Smolentseva buried her first of the season after streaking down the left wing in quick transition -- Scrivens got a piece of it, but it squeaked through, and the lead was cut to 3-1.

The Whale had life after that goal, and they just kept coming. The Riveters were unable to sustain much offensive zone pressure. Connecticut played with a short bench this game, as they were without the services of Jessica Koizumi, and were only about to roll 4D without the services of Molly Engstrom, who was serving a one-game suspension for a brutal headshot to Beauts forward Meghan Duggan. However, their ability to hold the puck in the offensive zone made the Riveters look like the tired team.

Shiann Darkangelo cut the lead to 3-2 on a sneaky shot whipped from the bottom of the left circle, with under 2:00 to go and Leonoff on the bench. Darkangelo got her second of the game to tie it up with just nine seconds left on the clock, as Kelly Babstock stormed down the right-wing boards and fed a perfect pass as Darkangelo drove to the net. The Riveters' hopes of ending the Whale's perfect season fell apart in less than two minutes.

Overtime featured a few sparkling saves by both Scrivens and Leonoff, and a lot of missed penalties by the officials. Then New York faced the unenviable task of trying to beat Leonoff in a shootout.

Leonoff made saves on Madison Packer, Bray Ketchum, and Lyudmila Belyakova. At the other end, Scrivens stopped Kelly Babstock and Sam Faber. The third shooter for Connecticut, of course, was Kelli Stack -- perhaps the best player in the league to have in a shootout with the game on her stick. She came in with speed, then slowed down, and made a few quick moves to slip the puck five hole on Scrivens.

It's not an accident that the Whale are 8-0, but their record hasn't been without a little drama and a bit of luck as well. However, in a competitive league, it's hard to get as lucky as the Whale have been without also having talent on your side. The next team with a chance to break the streak is Boston, who will travel to Stamford on December 27 for the first time.