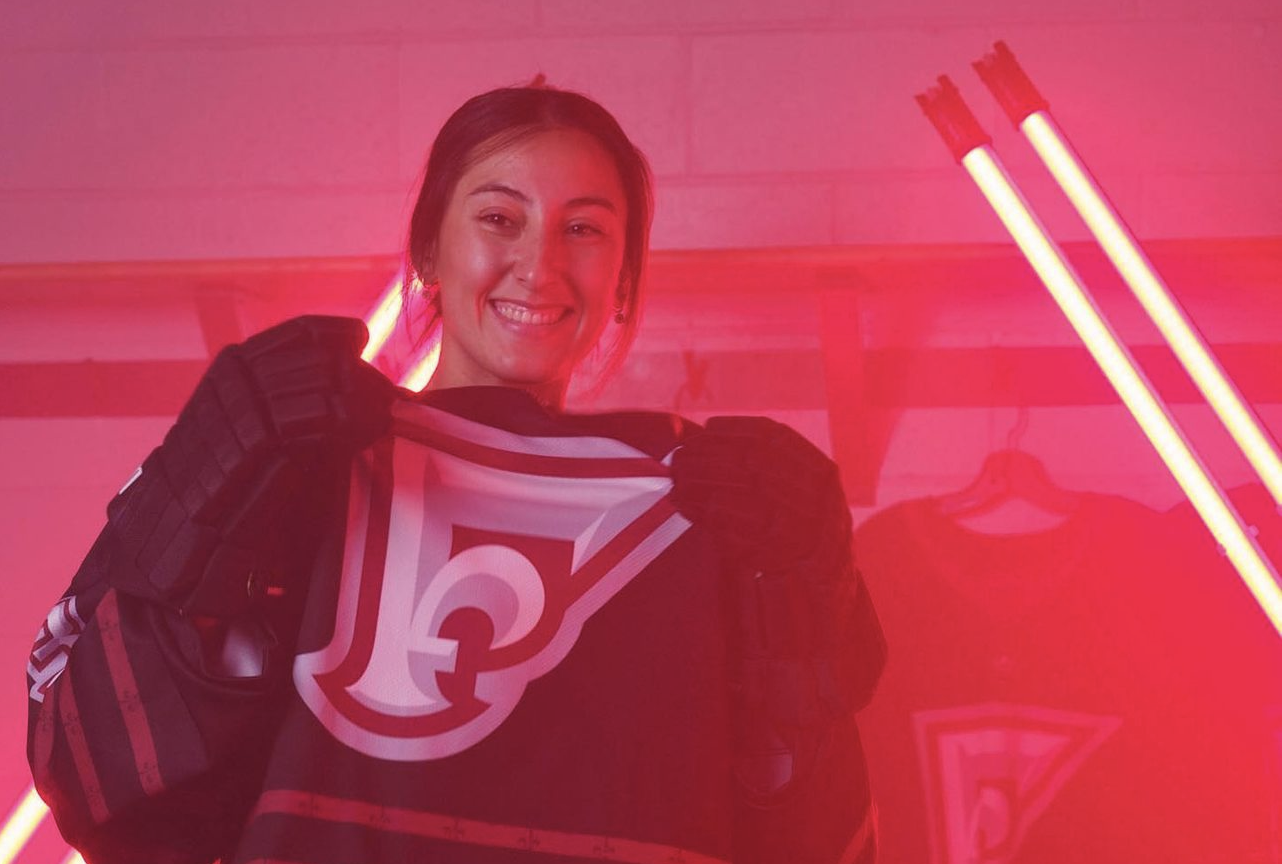 Author's note: This is the first in a season-long series of Premier Hockey Federation player features. Over the next few months, I hope to provide in-depth features on (at least) one player from each PHF team. Stay tuned for more!

As the calendar turned from 2021 to the new year of 2022, Brooke Stacey wasn't thinking about hockey. Busy with motherhood and a full-time job, the sport she'd played for years had understandably taken a backburner to other priorities.

By the time spring came, it had been well over a year since Stacey's last action in the shortened Premier Hockey Federation season in Lake Placid, in early 2021. She hadn't been on the ice or trained in any capacity. Hockey seemed to be in the rearview, at least for the time being.

All of that changed when Stacey began to hear rumblings about a potential expansion team coming to Montreal, just a short drive from the Kahnawake Mohawk Territory where she lives and works.

There were no guarantees that such a team would actually be coming, or that Stacey would make the roster. Still, it was time to get to work.

"I was living in Maine during last season, and there was no team close by," Stacey said. "So I got a job at home and then I heard about how Montreal was going to have an expansion team. But no one was giving updates, and it was super last-minute that they actually announced everything. I just started training in hopes that there would be the expansion team."

Finally, after months of training, Stacey heard the good news: the PHF officially announced its Montreal expansion on July 12.

"It would've been really sad if [the team didn't actually form] because I would've been doing everything for, really, nothing," Stacey said.

"After the bubble, I just stepped away from hockey completely," she said. "Even working out, nothing was going on. I started training at the beginning of summer, on-ice and off-ice. The last five, six months have been a lot of commitment and pushing myself to make sure I'm ready for this season."

Fast forward a few months, and Stacey made the Montreal Force roster. The team trains twice and practices three times each week. Stacey and her teammates are also in a unique position, as the Force will play their "home" games this season in a traveling tour around the province of Quebec.

It's still early, but Stacey's impressed by what she's seen so far. "We have a great group of people, on and off the ice," she said. "Everyone's putting in a hundred percent to be the best that we can be. We're going to show people what we have and make our way up there in the standings."

She noted that team president Kevin Raphaël, vice president Emmanuel Anderson de Serres, and head coach Peter Smith provide a forum for honesty and have an open door policy. "That's how you grow as a player, and even as a person," she added.

Away from the rink, Stacey also has a full-time job on her reservation, working for the council as the registrar. Above all else, though, she's a mom to her two-year-old son, Tehaweraténie's Kodah.

"I'm just grateful for the opportunity to play again, and being close to home, because it's easier with my son," she said. "We have a village to help. It's awesome to be back again."

Stacey and her family live just outside the Kahnawake reservation, about 20 minutes' drive from the Force practice rink on a good traffic day.

She returned to hockey less than a year after giving birth to Tehaweraténie's Kodah, re-joining the Buffalo Beauts for six games in Lake Placid, but this season will be her first full-length regular season since returning from maternity leave.

"I actually didn't think about that. Wow," she said when I asked her about the topic. "I'm a little nervous, only because I have a full-time job too, so I'm just hoping everything doesn't get on top of me. It's important for me to make sure I'm keeping myself sane."

"I have a baby. I have a full-time job, I have hockey and then training, so it's just making sure I'm juggling everything well," she said. "My child comes first, but this is also a job, so I have to make sure I'm coming to the rink mentally-prepared. Some nights, I don't sleep because [my son] is up, so it's a lot, but I'm excited to see how everything pans out."

Tehaweraténie's Kodah recently turned two, and Stacey has started introducing him to the sport she loves so dearly – even if he doesn't completely understand it at such a young age.

"We just started taking him on the ice," she said. "He can already balance. The first time we put him on skates, he was already balancing by himself, like walking."

"He's kind of good already, but on the ice, I have to hold him, and he says run, run, run," she said. "Then I have to skate really fast around the ice with him. I don't know if he knows exactly what it is, considering he's yelling 'run' instead of skate."

Not just a mother, not just a professional athlete, Stacey is also proud of her Indigenous heritage and wants to serve as a role model in all three of those capacities.

"It's important to be able to show anyone – women, children, boys, girls – you can do what you want to do, no matter the circumstances," she said. "I had a whole baby and I'm here again, I'm doing well. You can chase your dreams, no matter where you come from. You just need to stick to the goal and the dream."