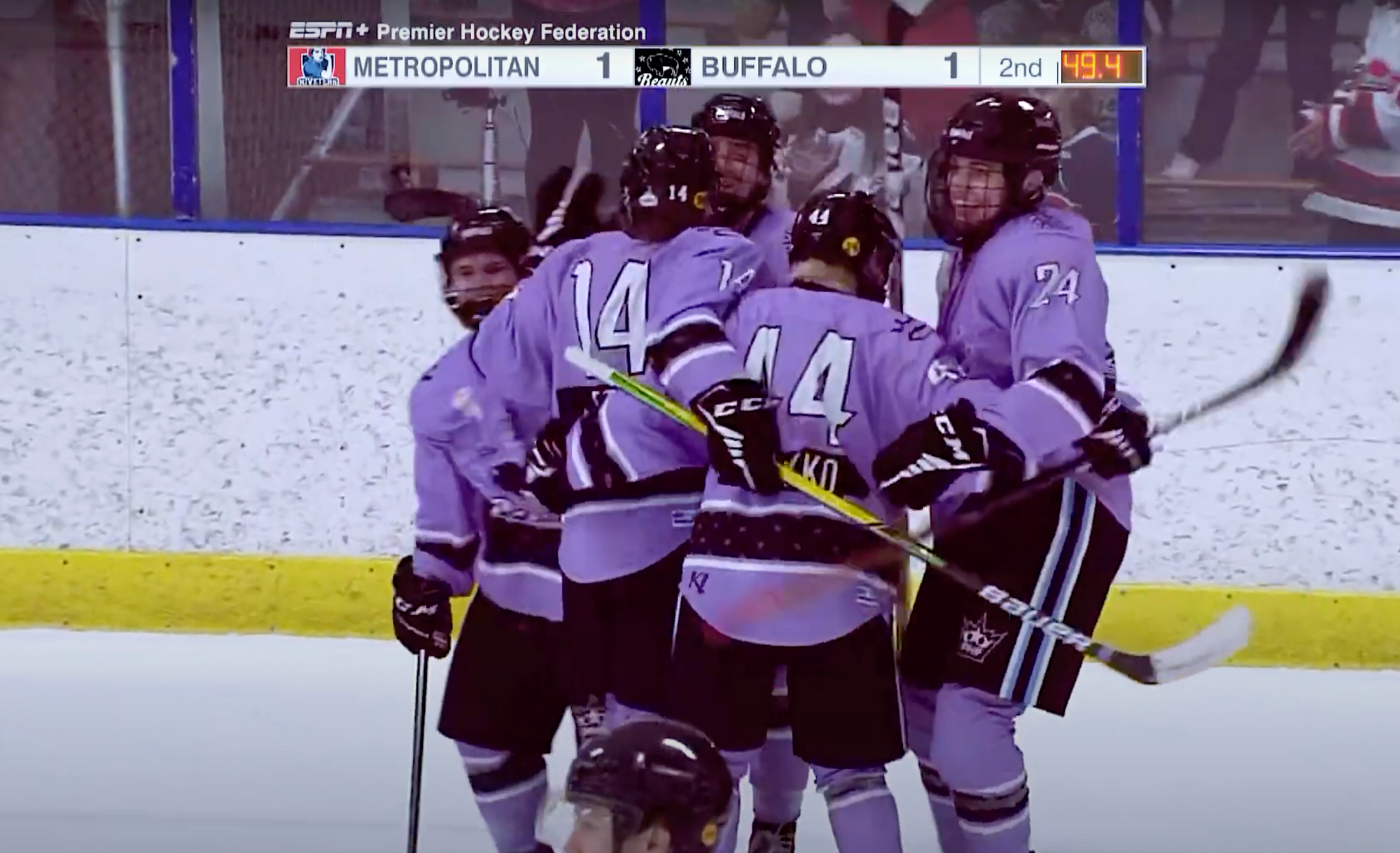 The Toronto Six regained first place in the Premier Hockey Federation with two wins over the Minnesota Whitecaps, while the Buffalo Beauts and Metropolitan Riveters split their weekend series.

The Six maintained their perfect home record with a sweep of the Whitecaps, capturing 5-2 and 2-1 wins over Minnesota this past weekend.

Toronto dominated much of Saturday's first period, with a lot of puck possession and zone time early on. Although the Six really controlled the pace of the game, Minnesota had a few good chances, and the most important thing: one that went in. Who better than league-leading scorer Allie Thunstorm to open the scoring?

After the puck slid off a Six player's stick, the Whitecaps created a 3-on-1 opportunity heading into the other end. A cross-ice pass from Meaghan Pezon found Lexie Laing, who quickly shuffled it to Thunstrom in front. Goaltender Elaine Chuli couldn't keep up with the speed of the play, leaving Thunstrom a wide open net.

Although the Whitecaps held the momentum going into the intermission, it was the Six who came out strong at the beginning of the second period. After a big penalty kill, the Six found a tying goal on a rebound by Natalie Marcuzzi. Brooke Boquist backhanded the puck in front, and Marcuzzi had the initial shot and then the rebound as Jenna Brenneman failed to cover it.

The tie lasted only about two minutes, as Audra Morrison quickly regained the lead for Minnesota. Amid four Six players, Morrison found a loose puck in the slot, pivoted and ripped it five-hole just under Chuli's pad.

Toronto had several good chances later, leading to this huge save from Brennemann:

After the Six killed off yet another penalty, they once again used the momentum to fuel their offense and tie the game. Emma Woods carried the puck much of the way down the ice, passing it back and forth with her teammate. After a backhand to Boquist, Woods parked herself in front, got the puck back and popped it in top-shelf.

Mikyla Grant-Mentis, one of the league's most dangerous offensive forces, gave Toronto their first lead of the afternoon just over a minute later. Grant-Mentis flawlessly executed this play all on her own. As several Six players collided at the blue line, she found herself alone and being trailed by two Whitecaps. It didn't matter, as she got free enough to slide the puck five-hole.

The goal and the play weren't surprising for anyone who's watched MGM; perhaps the most surprising thing is that it took her that long (objectively – not actually long!) to get on the scoresheet.

Exactly five minutes later, Grant-Mentis scored her second of the game, redirecting a shot from Stephanie Sucharda in the circle to Brennemann's left. The puck jumped around a bit and eventually entered the net after bouncing off the post.

Three unanswered goals turned into four halfway through the final frame. Woods scored her second of the afternoon on a backhand, shoveling the puck into the net from just outside the blue paint. Marcuzzi went on to score her second of the game off a pass from captain Shiann Darkangelo, past a falling Minnesota player and through the crease.

Sunday's game opened with a quiet first period, and a fairly even one, at that: shots were 16-13 in favor of Toronto. Morrison scored Minnesota's lone goal – her second of the weekend – just before the midway point of the second period.

After another dangerous chance by Grant-Mentis, the Whitecaps battled to get the puck out of the zone. Jonna Curtis carried it down the ice, then executed a perfect pass to Morrison, who got ahold of the moving puck and directed it into the net five-hole.

From there, the Six really ramped things up to get back into the game. Boquist tied it with six minutes left in the second period, stealing the puck off a Whitecaps' stick behind the net, curling around to the front of the net & slid it in with a backhand.

Toronto outshot Minnesota by a whopping 14-4 margin in the third period, but the most important shot was, of course, the one that went in. Maegan Beres tallied the game-winner early in the final frame, ripping a slapshot from outside the circle to Brenneman's left, and the Six took yet another win.

Amanda Leveille missed both games with an undisclosed injury.

The Beauts finally registered their first home win, but dropped the ball in Sunday's rematch and ended up splitting the weekend with the Riveters.

Buffalo came in looking to build off a big win in Minnesota, and did just that in Saturday's 3-2 win. This marked the first time since October 19-20, 2019 that the Beauts have won consecutive games.

Although the Beauts started off strong, the Riveters got on the board first just after their power play had ended. One second after the penalty ended, Kendall Cornine picked the top corner behind Carly Jackson to open the scoring.

Graciously, it took only 1:20 for the Beauts to tie the game. Jenna Suokko stole the puck in the Riveters' defensive zone and blasted a hard shot, easily beating Brooke Wolejko for her second goal in as many games.

Buffalo's penalty troubles continued over the rest of the period and into the second. At one point, Cassidy Vinkle's penalty had expired, and she remained in the box as neither she nor the attendant were paying attention to the clock. (Kristen Barbara, who had also been penalized at the same time, exited when she should've.) Little issues such as this can add up to make a difference in a close game.

The Beauts were afforded several big power play opportunities later in the second, as Kelly Babstock took three separate minor penalties consecutively. At one point, Haley Frade joined Babstock in the box, sending Buffalo to a lengthy 5-on-3.

Finally, Anjelica Diffendal scored on the advantage to give her team a 2-1 lead in the game. A pass from Allison Attea found Diffendal in front with under a minute to play in the period.

Cassidy Vinkle increased the lead just 42 seconds into the final frame on a fantastic play that she engineered all on her own. Vinkle carried the puck from the far blue line all the way into the zone and shot it from the slot to beat the netminder.

Although Madison Packer would score a five-hole goal with under ten to play, the Beauts held on for the victory.

The Beauts were afforded multiple power play opportunities in the first period, but couldn't capitalize and barely got a few shots off. They appeared to score at one point, but an off-site video review was deemed inconclusive. This may be a scenario where overhead cameras could've come in handy; an on-site photographer had photos of the puck in the net, but without clear video evidence, there was no goal.

Rebecca Russo opened the scoring in the second period with a power play tally. Vinkle tied the game several minutes later, just after exiting the box on another penalty call, sneaking it through Sonjia Shelly's five-hole.

Buffalo built on this momentum with a power play goal from Claudia Kepler less than three minutes later. Kepler, who missed Saturday's game to coach her Syracuse team which won the College Hockey America championship, scored with a shot from down-low that beat Shelly on the blocker side.

Cornine was the difference-maker in the third period for the Riveters. She tied the game, then scored a power play tally from down low to Jackson's right minutes later.

Despite a later power play on an arguably weak slashing call against Packer, Buffalo was unable to rally for the comeback.

The Beauts were without captain Taylor Accursi, who missed the weekend due to "personal reasons." Head coach Rhea Coad said the team is "hoping" to have Accursi back in the lineup for their next game.

Packer, Riveters head coach Ivo Mocek, and several others were clearly unhappy with the officiating in both games. Throughout the season, officiating is something many have noted as a factor that they hope to see improved with clearer calls and more consistency.

In addition, a basic PHF regulation was broken in Saturday's game. Per the league's guidelines, media timeouts cannot be taken after an icing call. This is a common guideline in hockey. However, that's exactly what happened, reportedly because the ESPN+ and broadcast crew told the on-site officials to take the timeout regardless.

Later in Saturday's game, the Riveters appeared to have scored. On-ice officials discussed it & ruled it no goal due to the puck being kicked in. Several minutes later, after the play had restarted, the current play was blown dead since offsite officials wanted to initiate a review. This, of course, shouldn't have happened; once the puck has been dropped and the play restarted, there is no capability for review on a previous play.

It would be really nice to see everyone get on the same page and actually follow the rules. That includes on-ice officials, off-ice officials, and the off-site review crew.

The PHF recently announced plans to host its playoffs at AdventHealth Center Ice in Wesley Chapel, Florida. All six teams will travel, with the top two regular-season seeds receiving byes to the semifinals. Preliminary round games and semifinals will be streamed on ESPN+ in the United States. The Isobel Cup Final, on Monday, March 28 at 9:00 PM Eastern time, will air on ESPN2.

Here is the full schedule (all times Eastern US time):

This isn't the first time players from the PHF will participate in a game in Florida, but it is the first time a non-exhibition game will be held there. "Team NWHL" previously faced off at the same rink (formerly called Florida Hospital Center Ice) against the US Women's National Team in a pair of games in 2018.

Hosting its playoffs in an outside market, where many local fans won't be able to travel on short notice, is certainly an interesting choice by the PHF. It's also reportedly an expensive one, as commissioner Ty Tumminia told ESPN that it's "not cheap."

More than that, hosting it in Florida, a state which saw over 103,000 new COVID cases in the week of February 4 and whose governor has barred local governments and school systems from imposing COVID-19 restrictions, is not a great look for a league whose last season was interrupted by a COVID outbreak in Lake Placid. Player, staff, and fan safety should be paramount above all else, and I'm not sure this sends that message. Hopefully by March the COVID situation has improved somewhat and the risk will be lower, but it is a situation to watch in the coming months.

The Riveters will visit the Whitecaps for a weekend series, with games on Saturday at 7:00 PM Central and Sunday at 2:00 PM Central. The Beauts and Six will face off in the Buffalo Believes Classic on Monday, February 21 at 3:00 PM Eastern at Buffalo RiverWorks, a semi-outdoor facility that also hosted a game between Buffalo and Metro in 2019.

The Pride will return to action on February 26-27, while the Whale are off until March 5-6.