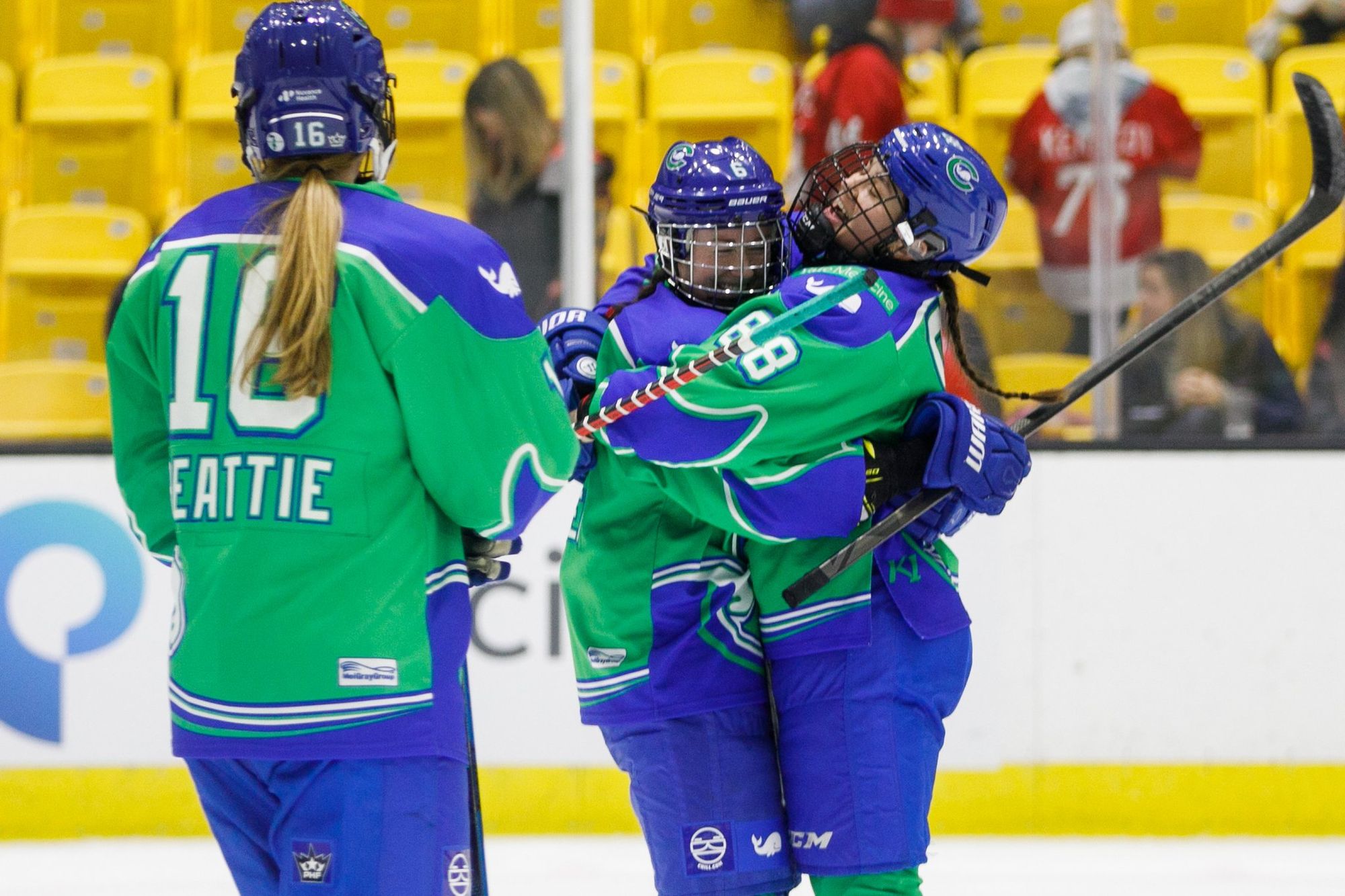 Saturday's match-up between the Whale and Pride was a close one, with a second-period shorthanded tally being the difference maker in the end.

Mallory Souliotis opened the scoring just over five minutes in, picking the top corner after a pass from Jillian Dempsey from Abbie Ives' left side. Boston's lead lasted only 1:37, as Amanda Conway tied the game quickly after. Emma Vlasic took a shot from down low, and Conway got her stick on it to redirect it in.

The back-and-forth continued as the game began, and once again, it was Boston breaking the tie. With under four minutes remaining in the opening frame, Taylor Wenczkowski scored her first goal of the season off a deflection. Wenczkowski put a shot on net from the slot, and it appeared to go off a Whale stick or skate up and over the goalie.

It took a little longer this time for Connecticut to tie the game, but they still managed to do so in the first few minutes the second period. This time, it was Vlasic herself scoring to tie things up at two. A failed Pride attempt at escaping the zone ended up with the puck on a Whale stick and a quick sequence of chances led to a number of players on the doorstep. The play was reviewed, and the call on the ice (a goal) was confirmed.

Boston had a power play opportunity minutes later, but it was Connecticut who capitalized with a shorthanded tally. Janine Weber and Allie Munroe got the puck to the net; Katie Burt gave up a rebound, and Kennedy Marchment jumped on it from right in front.

Marchment's goal held up as the game-winner, although both teams recorded 11 shots each in the third period and several more in the remainder of the second period. Each team also had time on the power play but couldn't take advantage.

Ives made 24 saves and extended her team's winning streak with the opening game of the weekend.

After giving up the first goal on Saturday, the Whale didn't make the same mistake on Sunday. Marchment opened the scoring just 1:20 in. The Pride would sustain some good zone time and have a handful of good chances, but the Whale kept finding the puck.

Eventually, it paid off as Weber doubled the team's lead near the midway point of the period. With a lot of bodies in front of the net, Weber got her stick on a puck in mid-air and backhanded it in past Lovisa Selander.

As the game went on, the Pride had trouble getting anything started, with a missed pass here and a puck picked off a stick there. Sammy Davis finally broke through with a wraparound, putting it under Ives' pad early in the second period. Boston found some momentum, but Davis' goal would be the only one for them that afternoon.

Taylor Girard scored a beautiful goal later in the second period off a great feed from Kennedy Marchment. The pair had a 2-on-1, and Marchment set up Girard with a great pass for the goal, which came 4-on-4.

After a few more penalties both ways, several players collided into Selander. She was down o the ice for a few moments, got up on her own, and spoke with a trainer before departing the game. She left having made 11 saves on 14 shots.

About four minutes after Victoria Hanson entered the game, the Whale went up 4-1 on Alyssa Wohlfeiler's first of the afternoon. Girard picked up the puck in the neutral zone, then passed it cross-ice to Wohlfeiler, who put it over the glove of the netminder.

Wohlfeiler scored her second of the game in the opening minutes of the third period, off another great setup from Girard. Girard threw a pass out from the side of the net to Wohlfeiler in the slot, who ripped it over Hanson's shoulder.

Although the Pride certainly had their chances, including a minute worth of 5-on-3 late min the game, the Whale held strong for the win. Hannah Bates also added a goal in the final three minutes of play. Girard & Marchment each had three points, while Cailey Hutchison won 67% of her face-offs.

The Whale are now on an eight-game winning streak, tying their franchise high.

It was like a tale of two teams for the Beauts this past weekend: the worst of times, followed by the best of times. A sluggish effort on Saturday led to a decisive 8-1 loss, but they looked like a completely different team Sunday afternoon in a 6-2 win.

Saturday's game was all about special teams, as the Whitecaps scored a whopping four power play tallies and added two shorthanded markers. From the get-go, things were bad for the Beauts, who couldn't stay disciplined and produced little else beyond sloppy defensive work over the sixty minutes. That, combined with great goaltending as usual from Amanda Leveille, spelled trouble for Buffalo.

With Dominique Kremer trailing her unenthusiastically, Taylor Turnquist opened the scoring with a bottle-popping shot from down low. Allie Thunstrom would add two shorthanded goals in the first period, chasing Carly Jackson from her net. Thunstrom's second goal (Minnesota's third) was particularly beautiful, as she and Jonna Curtis broke loose on a 2-on-0.

Buffalo squandered several opportunities on the power play, then went down by four goals early in the second period on a goal from Audra Morrison. Thunstrom completed the hat trick with a PPG from in front of the net, and Emma Stauber added a goal before the end of the middle frame.

The Beauts finally got on the board with a power play goal of their own early in the third period. Anjelica Diffendal found the puck down low amid a big scramble and worked hard to get it into the net. Unfortunately for Buffalo, that was as much offense as they could muster; Turnquist and Meaghan Pezon added goals in the last 12 minutes of play – both on the advantage – and the Whitecaps skated away with a huge win.

Buffalo did a 180 on Sunday afternoon, and it paid off big time. The Beauts also broke an eight-game losing streak, and actually looked like they wanted to be there, unlike Saturday's game.

Their first three goals all came on deflections, which may not be the ideal way to score, but for a team looking to rebound after such a rough loss, you can't be picky. It's not how the goals are scored, it's that they're scored at all. Buffalo was also helped by the fact that Jenna Brenneman started in goal instead of Leveille.

Emma Keenan opened the scoring less than halfway through the first period. Jenna Suokko then scored her first PHF goal – and became the first Finnish player to score in the PHF – as she deflected a long point shot from Marie-Jo Pelletier.

Teams exchanged chances early in the second, as Curtis got around the Buffalo defense and then the Beauts had a 5-on-3 opportunity. Curtis would eventually put Minnesota on the board after stripping a Beauts player at the blueline, taking it to the other end of the ice and going around Jackson to score. Late in the period, the Beauts scored once again on a deflection, as Kennedy Ganser tipped Elena Orlando's shot.

Although Thunstrom would score in the third period, the Beauts maintained their lead and improved on it, too. Emilie Harley and Autumn MacDougall scored in the third, and Erin Gehen added an empty netter, to give Buffalo the push to a 6-2 win.

Ten different Beauts players recorded at least a point. Buffalo was also without co-captain Taylor Accursi this past weekend. Sunday's win was just the second of the season for the Beauts, and their first-ever in Minnesota.

There are two series this weekend. The Metropolitan Riveters return to action for the first time since January 23 as they visit the Beauts for a pair of games (Saturday at 7:00 and Sunday at 1:00 PM Eastern). Elsewhere, the Toronto Six host the Whitecaps for two games up north (Saturday 2:00 PM and Sunday and 12:00 PM Eastern).