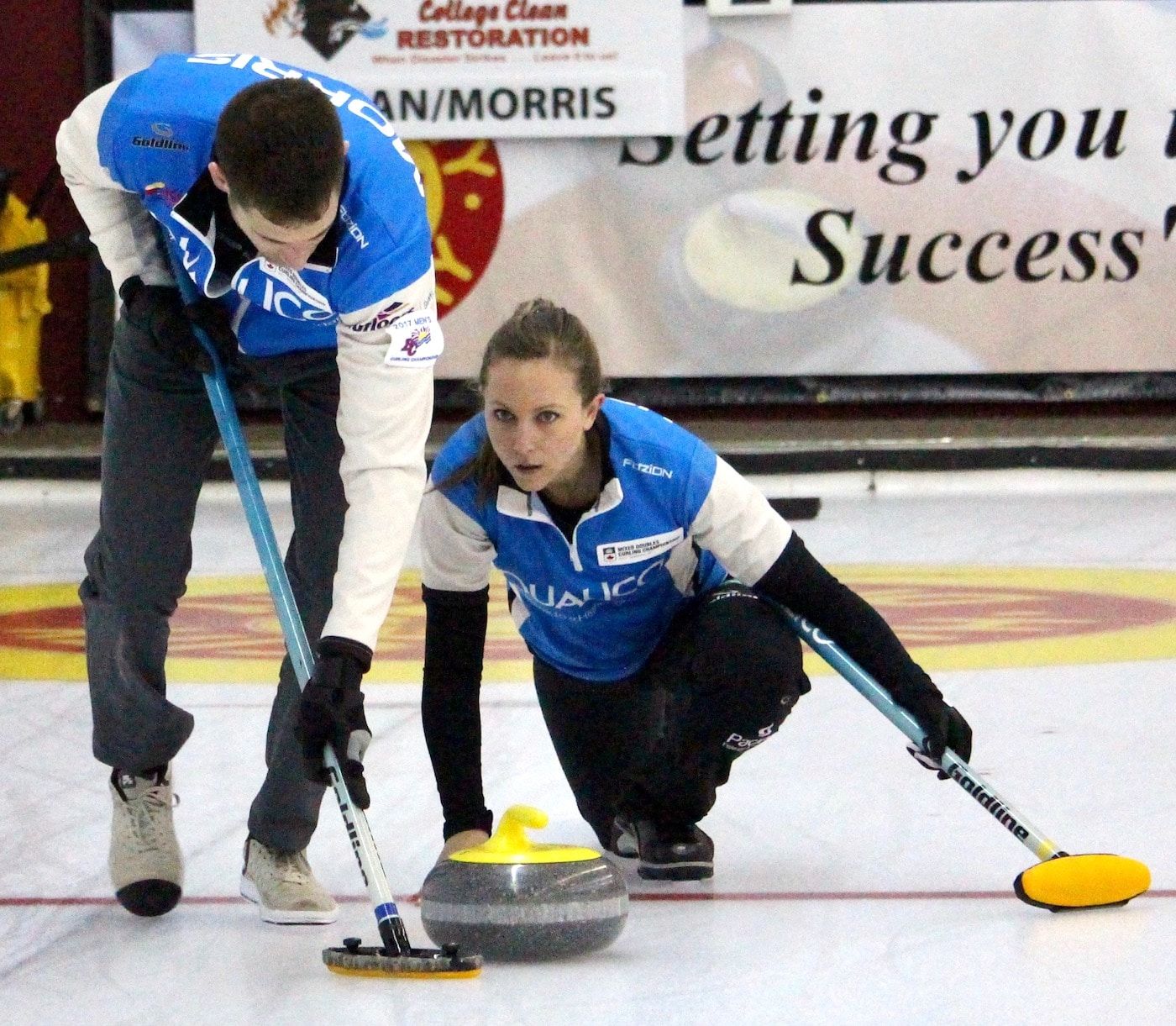 Mixed doubles curling makes its sophomore appearance as part of the Olympic program next week after a successful debut in Pyeongchang in 2018. The event will kick off the curling competition at this year's winter games, just as the sport did four years earlier. And just like four years ago, mixed doubles will begin play before the official start of the Beijing Games on February 2.

For those who missed it at the last Olympics, mixed doubles differs from the standard four-person curling events in the following ways:

There are other minor differences, but the result is a game that is faster and often more exciting than the traditional four-person team game.

The smaller teams also make the discipline more economical and feasible for newer curling markets to ice competitive teams. With a record 48 countries participating at the 2019 World Curling Championships, and at least one team from every continent that year, mixed doubles competition has raised curling's profile to a truly global level.

Unfortunately, the pandemic has impacted the sports in several ways, including the the cancellation of the 2020 Worlds, the disruption of the annual curling tour the past two years, and the cancellation of the 2022 Canadian Olympic trials. While not remotely important when compared to the losses and illnesses experienced by millions during the pandemic, Beijing 2022 represents an opportunity for mixed doubles to regain the excitement the sport generated when it kicked off the Games four years ago.

The Canadian duo of John Morris and Kaitlyn Lawes brought home the inaugural medal in mixed doubles in South Korea. Their win gave Canada, which had dreams of sweeping the entire curling competition, the start they needed. The pair only teamed up weeks before the event at the Canadian qualifiers because Morris' regular mixed doubles partner, Rachel Homan, was set to represent Canada in the women's event.

Lawes and Morris were simply dominant, as I wrote at the time:

The Canadian pair fully deserved the gold. After dropping the opener to Norway, Morris and Lawes went 8-0 to close out the tournament. Canada had a goal differential of +37. China was the only other team with a positive differential, and they were only +3. Lawes and Morris were the best players of the tournament, both integral to the win.

Unfortunately, the gold delivered by Lawes and Morris (the second for each partner in their Olympic careers) was Canada's only curling medal, a sore spot for Canadian curling fans.

The competition wasn't without a degree of scandal as Anastasia Bryzgalova and husband Alexander Krushelnitsky, part of a contingent of Olympic Athletes from Russia, were stripped of their bronze medal after Krushelnitsky tested positive for meldonium, receiving a four-year ban.

10 teams will be vying for the podium in Beijing including Australia, the Czech Republic, Italy, Sweden, and Great Britain, all making mixed doubles Olympic debuts. The Australian pair of Tahli Gill and Dean Hewitt are making a little extra history as Australia's first ever Olympic curlers – in any event. Other qualifying teams are the United States, Canada, Switzerland, and host nation China. Other than the automatic qualification by host nation China, most teams qualified at the 2021 World Mixed Doubles Curling Championships, while Team USA and Team Australia qualified at additional qualification events.

2018 Olympic silver medalists Jenny Perret and Martin Rios are returning and looking to build on their podium finish four years ago. Currently ranked third in the mixed doubles standings, the pair were crowned world champions in Lethbridge, Alberta in 2017.

Scottish duo of Bruce Mouat and Jennifer Dodds are Britain's first mixed doubles team to appear at the Olympics. Both of them will be doing double duty, competing in mixed doubles as well as in the men's and women's team events. Dodds is a member of Team Muirhead, who had an uneven 2021 season, finishing eighth at the women's worlds in April, but they rebounded to win the European championships in November.

Mouat is also skip of his own team competing in the Olympic men's competition. Team Mouat is one of the world's most impressive young teams on the men's side, matching Team Muirhead's gold medal at the European championships while adding a silver at the worlds in 2021.

It will be a disappointing if Team GB doesn't feature in the medal round as Dodds and Mouat are the reigning mixed doubles world champions. However, success in the mixed doubles event could undermine Britain's efforts in the men's and women's tournaments. It's an incredible amount of curling that Mouat and Dodds will play in a short time period, and it will be interesting to see if the mixed doubles competition impacts their four-person events.

I'm thrilled that Sweden will make its debut in this event this year. Sweden is a perennial powerhouse in both women's and men's curling, with Team Hasselborg and Team Edin consistently staking legitimate claim to being the best on the planet. Their inaugural mixed doubles team brings both new talent and experience to the ice.

Almida de Val is a 24-year-old who plays third for Team Wranå, with whom she won a world juniors title in 2017. She's making the transition from the junior and university circuit and arrived with a splash on the mixed doubles scene, winning the 2021 Swedish championship and taking home bronze at the worlds in the same year with partner Oskar Eriksson.

The pair of Kristin Skaslien and Magnus Nedregotten have several mid-table finishes at the Worlds and but have often missed the podium at major events. That changed in 2018 in South Korea when the Russian team was disqualified, awarding Skaslien and Nedregotten an Olympic bronze. In-form play might matter more in these Olympics than ever before, with two years of interrupted competition due to the pandemic. If that's the case, Norway is worth watching. Taking home silver at the worlds in Aberdeen last year, the Norwegians out-curled the Scottish duo of Mouat & Dodds 82% to 79% in the final, narrowly missing out on gold. They're also currently occupying the number two space on the mixed-doubles world rankings.

There was a fair amount of pre-tournament intrigue in the Canadian camp. Canada has always required qualifying tournaments to determine its representatives across all the curling competitions and does not allow mixed doubles participants to represent the nation on the women's or men's side at the same Olympics, unlike several other nations.

But the pandemic disrupted these plans, and after completing the Olympic qualifiers for the four-person events in November, the mixed-doubles qualifier, slated to start at the end of December, was cancelled shortly after Christmas due to the prevalence of the omicron variant in Canada and rising positive test rates among participants.

Curling Canada announced it would make the decision on who would represent Canada in consultation with the Canadian Olympic Committee and Own the Podium. Cue two weeks of speculation, concern, and comedy from Canada's curling fans:

The debate about who should represent Canada did highlight an important conversation that has been growing in legitimacy as the profile of mixed doubles has grown. For some, like Switzerland's Perret and Rios, mixed doubles is their primary focus while for others, mixed doubles is a competition subordinate to the priorities of their four-person team commitments. This isn't unique to curling, as runners, swimmers, skiers, and a variety of other athletes compete in multiple disciplines under the umbrella of one sport, but it is a legitimate complaint for those who have prioritized the mixed doubles games and worked so hard to legitimize it.

Canada's decision was made through a weighted ranking system that prioritized recent success and international experience:

Making the decision harder was the fact that the top ranked Canadian mixed doubles team, Jocelyn Peterman and Brett Gallant, had already earned the right to wear the maple leaf in China as members of Team Jones and Team Gushue, respectively. Canada's second ranked team, Jennifer Jones and husband Brent Laing, has the same issue, as Jones will be skipping her team at a second Games.

Where things get interesting is with Canada's third ranked mixed doubles team, Nancy Martin and Tyrel Griffith of Saskatchewan. While both are still active in the four-person game, they have focused on mixed doubles the last few seasons, playing 170 games in that competition. They've found some success too, taking home silver at Canada's 2019 mixed doubles championship (falling to Peterman and Gallant).

However, the emphasis on international experience in the selection committee's rules meant that Griffith and Martin out. For Martin, the decision was disappointing: "There was hope in the back of our mind that all the work we had done — we put ourselves at the top of the rankings — would give us a chance, but the goal-posts changed a couple times. We aren't able to take a run at it, to reach those goal-posts."

Canada's decision to go with experienced international curlers John Morris and Rachel Homan has not been met with universal approval. Morris, as the defending Olympic champion, can stake a claim to the spot on that basis. His long-time mixed doubles partner has had a rockier Olympic experience. Team Homan had a disastrous Games in 2018 in the women's competition, finishing sixth, the worst ever finish for a Canadian team in Olympic history.

Since her incredible, victorious run to Olympic qualification in 2018 it feels like not much has gone right for Homan or her team. No major national or international wins and a team shakeup led to longtime lead Lisa Weagle departing.  (Weagle will also be in Beijing, as the fifth for Team Jones.) But scratching below the surface reveals three straight Scotties silver medals. There's no shame in losing two straight national championships to Team (Kerri) Einarson, the sixth ranked team in the world. But when consideration is given to the fact that Homan was pregnant for two of those Scotties tournaments, including playing while 8-months pregnant during a pandemic in 2021, it is hard to argue with the excellence that has continued to be on display since 2018.

They've played on the biggest stages and the most stressful moments curling can offer, but the Morris-Homan pair also makes a case for the value of familiarity. Morris and Homan have not only been doubles partners since 2015 but have known each other since childhood. Both from Ottawa, Morris used to curl with Homan's brother, and Morris' father, the legendary Earle Morris, coached Team Homan for several years early in their careers. There will be no need for instant chemistry, like Morris and Lawes were forced to demonstrate in 2018.

It's a situation with significantly more pressure given Homan's poor performance on the same stage four years ago and the controversial selection process. Chosen with an eye to the podium, it will be a failure if the Canadian pair doesn't medal and will do nothing to satisfy critics.

Mixed doubles curling competition kicks off with round robin matches on February 2nd. The entire mixed doubles tournament, including medal games, takes place before the four-team competitions even begin, so there is a huge slate of uninterrupted mixed doubles contests early on in the Olympic schedule.

For the full schedule including a handy time zone conversion with a single click, check out Olympics.com. In the US, all live streams should be available on Peacock, and on the CBC Gem app in Canada.