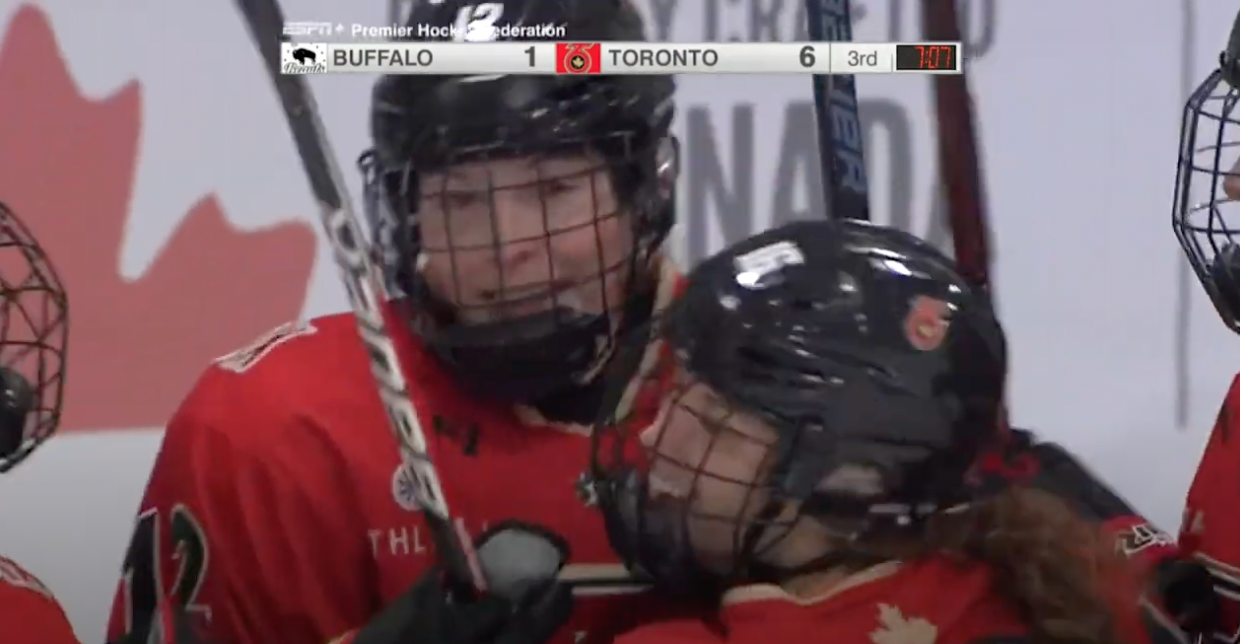 The PHF announced this morning a $25 million US investment in the league from its Board of Governors. We will have further details on the investment in an upcoming story.

The Toronto Six continued to showcase why they're the top team in the PHF, as they outscored the Buffalo Beauts by a whopping 14-4 margin over the course of the weekend at York Canlan Ice Arena. The Six played strong offensively, capitalized on their chances, and limited Buffalo's opportunities with the puck in the pair of wins.

On Saturday, Toronto scored the first five goals of the game before Buffalo managed to add one late in the third. The Six outshot the Beauts 40-27 en route to the 6-1 victory.

Leah Marino opened the scoring just over six minutes into the game, as she took advantage of an open side of the net with Carly Jackson sliding to the other side. Minutes later, Mikyla Grant-Mentis doubled the lead on a breakaway. (Bold move of Buffalo to give one of the most dangerous forwards in the PHF a breakaway.)

Before the first period ended, Amy Curlew scored on the backhand amid a scramble in front. Stephanie Sucharda made it a four-goal game early in the middle frame, as the Six fed off a 3-on-2 opportunity and got Jackson to come far out of her net.

That would be enough to chase Jackson from her net, bringing in Lovisa Berndtsson. Unfortunately for the Beauts, the goaltending change didn't spark much of anything. Although they were able to build some offensive pressure and had multiple chances, Buffalo couldn't beat Elaine Chuli.

Taylor Day added a goal early in the third period before Cassidy MacPherson finally got Buffalo on the board. At that point, it was too little, too late, as the Beauts were in too deep a hole to dig out of. Marino added her second of the game with just over seven minutes left in regulation to secure the five-goal victory.

As the teams rematched Sunday, Toronto once again exploded offensively, this time capturing an 8-3 win over the Beauts. The game included a five-goal second period for the Six, but it actually started off well for Buffalo, who scored the opening goal off Kennedy Ganser's first PHF tally.

It marked the first time Buffalo has held a lead all season – except for when they won in overtime – and could have been a sign of good things to come. Toronto had other ideas, though, as Emma Woods and Shiann Darkangelo both scored within 17 seconds of each other to quickly tie, and then gain the lead.

To their credit, the Beauts tied it and then regained their own lead late in the opening frame. Autumn MacDougall and Anjelica Diffendal scored 1:26 apart, and Buffalo had the upper hand heading into intermission.

The Six scored the aforementioned five goals in the second period to quickly put a damper on Buffalo's parade and take control of the game. Woods and Darkangelo both scored again, while Mikyla Grant-Mentis had a pair of goals. Brooke Boquist also tallied.

Toronto skated into the final frame with a comfortable lead, bolstered further by MGM's hat trick goal (currently officially credited to Maegan Beres) midway through the third. Two of Toronto's goals came on the power play, while another came shorthanded.

The Connecticut Whale are having their best season in a long time – possibly even in franchise history, if things keep up – and are just three points shy of the top spot in the PHF after a pair of wins over the Riveters in Danbury. With 5-1 and 3-2 victories this weekend, the Whale are now on a six-game winning streak.

From the get-go, Connecticut dominated Saturday's game. Even when the Riveters had a power play, the Whale limited their zone time and space. It was no surprise, then, that Kaycie Anderson opened the scoring with roughly five and a half minutes to play in the first period.

Metro did their best to get the puck out of the zone, but the Whale kept it in. A missed pass came off the boards to the left of Sonjia Shelly, and Anderson tipped a shot in front to sneak it in.

Despite being outshot 17-6 in the first period, the Riveters escaped the opening frame in just a one-goal deficit. The Whale, however, would triple their lead in the middle frame and then add two more in the opening minutes of the third period.

With Janine Weber in the box, Taylor Girard scored shorthanded four minutes into the second period to make it a two-goal game. Kennedy Marchment stripped a Riveters player of the puck in the Connecticut zone, passing it up to Girard, who carried it the rest of the way and popped it in on the far side.

Later in the period, Amanda Conway capitalized on a power play to make it 3-0. The Whale did a great job at keeping pressure on through several different situations, from a 4-on-5 to 4-on-4 and 4-on-3, and Conway finally beat Shelly on the rebound from just outside the blue paint.

Sunday's rematch was closer – just a one-goal deficit – but once again, the Whale came out strong to start the game, and that made all the difference this time. Connecticut outshot Metro 15-5 in the first period and scored the first two goals of the game, helping push them to the eventual victory.

This time, it was Janine Weber who opened the scoring midway through the first. Weber scored on a delayed penalty call, with six skaters out on the ice for the Whale. Hutchison registered the initial shot, and Weber pounced on a big rebound to the right of Brooke Wolejko.

Another rebound, albeit a much smaller one, led to the Whale's second goal with just over five minutes left in the period. Connecticut was once again on the advantage, and Amanda Conway snatched up a loose puck just inches from Wolejko's pad and tucked it into the left side of the net.

Less than two minutes later, the Riveters finally got on the board with a power-play tally of their own, as Kendall Cornine sniped it from the top of the circle.

Janka Hlinka picked off a drop pass from Hannah Bates and went on to score her first PHF goal in the second period with a beautiful shot that went high and into the net. Theresa Knutson would add a goal early in the third period to close the gap to just one goal, but the Whale held strong for the victory.

As a result of COVID-19 restrictions in Ontario, the PHF has moved its upcoming All-Star Showcase to Buffalo, New York. The Beauts will play host to the showcase on Saturday, January 29 at 5:30 PM at Northtown Center.

In addition to the already-named players, Emma Vlasic has been added to the Showcase, replacing Michela Cava who has returned to the KRS Vanke Rays.

Players competing in the 2022 PHF All-Star Showcase will receive an All-Star Bonus.