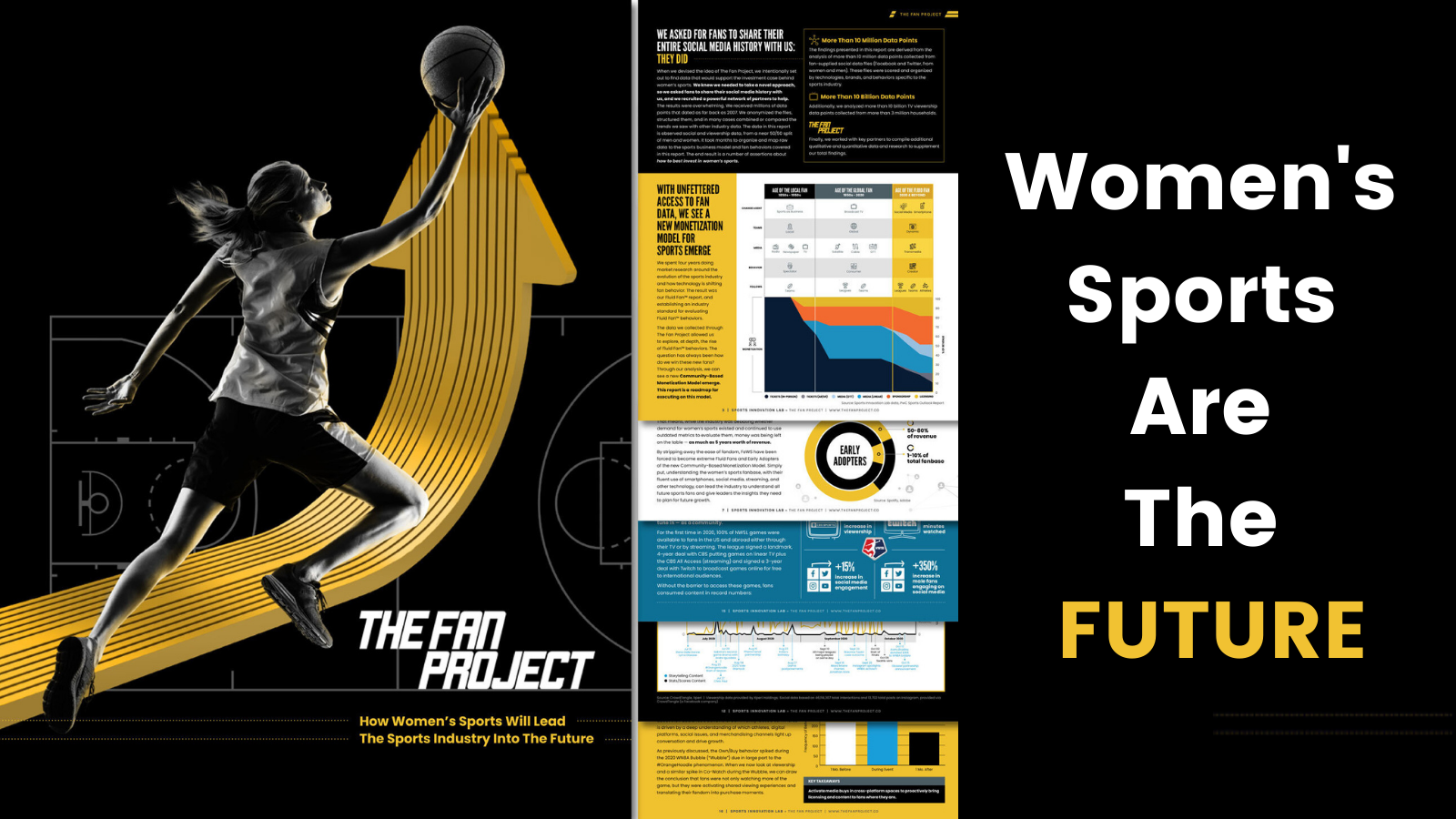 Olympic gold medalist Angela Ruggiero knows all about the struggles of women's sports to get people – notably, investors – to buy in. Today, Ruggiero and the Sports Innovation Lab have released the findings of The Fan Project, an extensive research project featuring more than 10 million data points which illustrate fan behaviors around women's sports and cite key benefits to companies sponsoring them.

"There's been a resistance to really investing in women's sports, because they didn't have the data," Ruggiero said. These findings, which focus largely on behavior of what researchers call the "fluid fan," suggest a new business model for women's sports that focuses on digital community engagement.

A number of women's sports organizations and leagues partnered with the Sports Innovation Lab on this project, including the WNBA, WWE, the NWHL and PWHPA, UFC and LPGA. Fans participated in the project by allowing access to their social media history (dating as far back as 2007), along with TV viewership data points. Data points were taken from North American fans only, and include an approximate split between those who identify as men and those who identify as women.

The overall message from the report is that women's sports are not only worth investing in, but provide a basis for a new community-based monetization model which focuses on digital platforms and the importance of storytelling and accessibility in media consumption.

This information may not seem groundbreaking to longtime fans and participants in women's sports, but it is the sort of marketing and behavioral data that could change the way investors and media companies think about the women's game as a product.

The project, whose full report was released Monday morning, contains a wealth of information about the "fluid fan", whose behaviors are noticeably impacted by technology. Examples of this are easy to find: in order to watch an NWHL game, fans have to go online. To buy PWHPA merchandise, fans utilize e-commerce and the organization's pop-up shops. Following the WNBA often relies heavily on social media and the Internet as a whole. Women's sports athletes are also generally more accessible and open via social media, which allows fans to establish connections with them in a way that men's sports doesn't.

"Lifting the men's model to women's sports doesn't work," Ruggiero said. "We have to do more around storytelling, to help brands realize this isn't a corporate social responsibility investment. This is a return on investment."

This integration of technology also means that the "fluid fan" is dynamic when it comes to choosing teams. Women's sports don't require a local team to support; with the focus on social media, smartphones, and technology as a whole, it's easy to follow and support any team, anywhere. The model shows that fan behavior is far less about tickets and in-person viewing, and more about media.

For example, the traditional model of monetization focuses on stats, scores and schedules, linear media channels, and the quantity of people watching on screen and in-person. The new, community-based model shifts the focus to storytelling, both short- and long-term content, which helps provide consistent, accessible content for digital channels and prioritizes quality over quantity.

"Fans of women's sports are digital natives and have a higher propensity to watch on digital channels, even when linear options are available," the report says.

When the NWSL debuted its new media rights deal in 2020, which featured streaming broadcasts as well as linear (TV), its viewership increased by a whopping 476% when compared to the previous year. The league also saw a 15% increase in social media engagement as a result.

Fans of women's sports are also most likely to "co-watch", meaning they not only watch the sports – they talk about them, often on social media, and often at the same time.

In addition, the report details the importance of social justice and discussion of societal topics and how these things drive conversation and increase viewership of women's sports. But the report suggests that these conversations also benefit men's sports. Every brand mentioned in the report, from Coca-Cola to Miller Lite, saw far more engagement on social media posts that were purpose-driven than general branded posts.

"Fans of women's sports are increasingly engaging with storytelling content in and out of season. Fans... put their values on display and engage/buy based on how brands/media/teams/athletes/others align with those values," the report says.

Insights gathered by Zoomph as part of the report also show that brands who invest in women's sports, such as Nike, Adidas and VISA, benefit from their investments. Fans of women's sports show a higher level of loyalty to these brands than general sports fans.

"Female empowerment and storytelling are in the DNA of the WWE," said Stephanie McMahon, Chief Brand Officer of the WWE. "With the results of The Fan Project, we now have valuable hard data that proves our commitment to women in sports isn't just the right thing to do, it’s an undeniably savvy business decision."

Understanding these fan behaviors, the shift of media consumption, and the return on investment for women's sports, is key to building the future. A focus on storytelling, rather than just simple statistics or game recap pieces, is key. Engagement and accessibility on digital channels is a major focus, and brands who invest in women's sports can benefit.

The full report from The Fan Project is now available here. To learn more about the Sports Innovation Lab, visit their website.