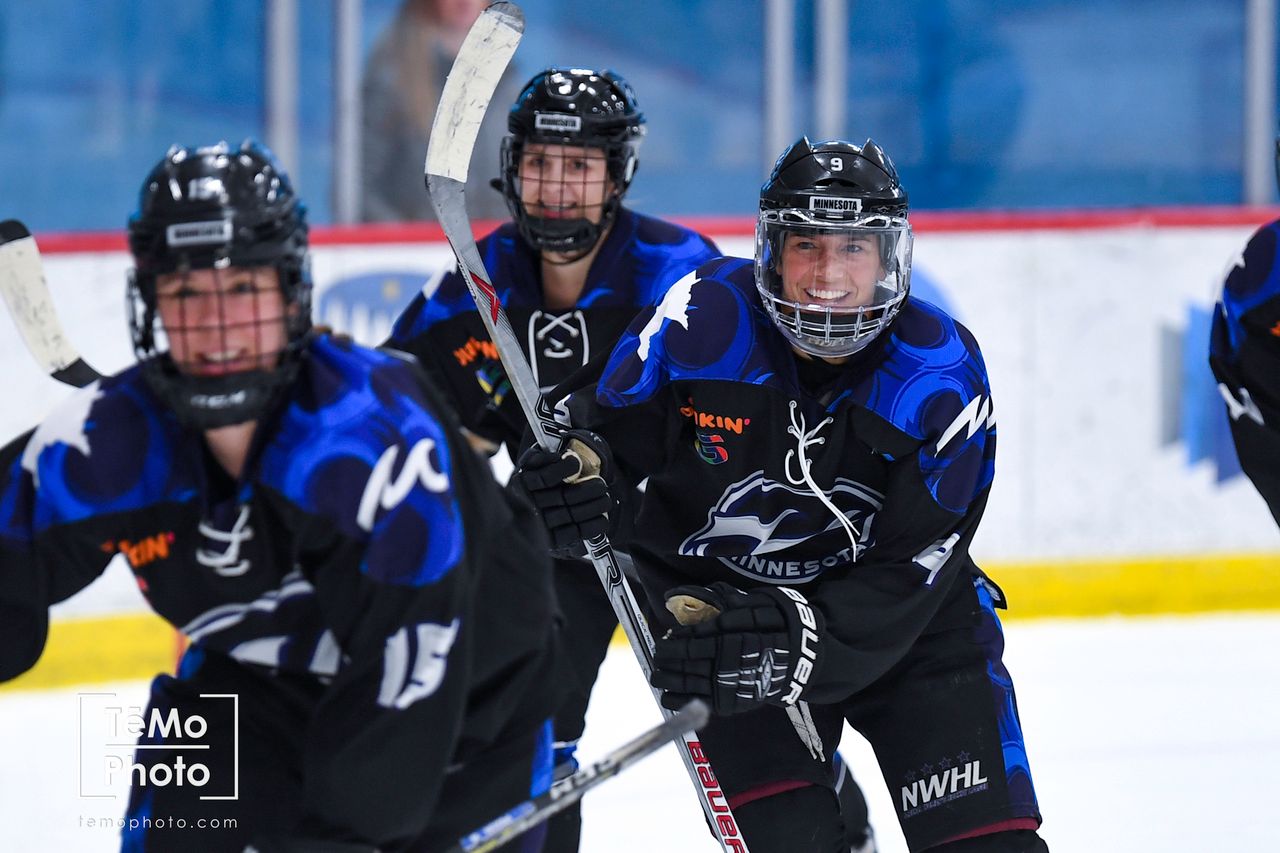 The National Women's Hockey League enters its All-Star break with the Boston Pride securing a first-place finish despite suffering their first loss of the season this past weekend. The Pride split a weekend series with the Minnesota Whitecaps (who have pretty much locked in a second-place finish), while the Metropolitan Riveters and Connecticut Whale also split their series. The Buffalo Beauts dropped to fourth place in the league and were inactive.

As a reminder, the NWHL tiebreakers are decided in the following order: points -> games played -> wins -> goal differential.

Allie Thunstrom was the star of the show this past weekend for Minnesota. She scored a late game-winning goal on Saturday to end the Pride's 19-game winning streak, then added a pair of goals Sunday.

On Saturday, Thunstrom's late heroics sent the Whitecaps to a 4-3 victory.

Jonna Curtis opened the scoring, tapping in a rebound off a shot from Amanda Boulier in front of the net. McKenna Brand tied the game a short time later, notching the goal off a great cross-ice pass from teammate Christina Putigna and capitalizing on Amanda Leveille's move to go down early.

The Whitecaps regained the lead almost halfway through the game on a shorthanded goal from Meghan Lorence. With Boulier in the box, Lorence snatched a long pass through the neutral zone from Stephanie Anderson, and capitalized on the breakaway opportunity behind the play.

Boston, battling to keep their winning streak alive, wasn’t going down without a fight. Captain Jillian Dempsey scored her first of the game in the opening minutes of the third period on a rebound shot that went into the net off Leveille’s pads.

Audra Richards helped the Whitecaps once again regain their lead, but Dempsey scored with just 57 seconds left to record her 100th career NWHL point and once again tie the game. Dempsey’s goal came on a rebound with Leveille far out of her net after she made the initial save.

Just as the game appeared headed toward overtime, Thunstrom showcased her speed and potted a top-corner shot over Lovisa Selander's right shoulder with 49.6 seconds left. This time, the goal would stand up, and the Whitecaps stole two points from a dangerous Boston team.

Leveille recorded 36 saves in the victory, while Selander made 27 saves.

Less than 24 hours later, the two teams met again. This time, it was Boston who had the early momentum, and they didn't let up. Brand scored her second goal of the weekend, showcasing great patience and capitalizing on a chance after Leveille went down early.

The Pride held onto that 1-0 lead until midway through the game, when who else but Thunstrom would tie the game for the Whitecaps. Right off the draw, Thunstrom collected a pass from Curtis to the left of Selander and scored the equalizer.

Mary Parker regained the lead for Boston late in the second period, but Thunstrom tied it early in the third period on a shorthanded goal. On that same penalty, Lexi Bender scored a power-play goal on a shot from the bottom of the faceoff circle to put her team up. Bender's goal came just 34 seconds after Thunstrom’s tally.

Putigna added an empty-net goal with 15 seconds remaining in regulation, and the Pride snagged the 4-2 win despite being outshot by a 35-26 margin.

The Connecticut Whale captured two points over the Metropolitan Riveters thanks to a shootout goal from Sarah Schwenzfeier on Saturday.

Both of the game's goals in regulation came within the first 10 minutes of action. Emma Vlasic opened the scoring for Connecticut; off the draw, the puck popped out to the blueline. The Whale were able to keep it in, and the puck bounced back to Vlasic, who found an opening on the short side.

Kate Leary would tie the game with just about 13 minutes left in the period. She found her way past two Riveters players and scored on a beautiful backhand shot that got past Brooke Wolejko.

Through a slew of players in the shootout, the game remained locked at one. Schwenzfeier would eventually tally the lone goal to give the Whale the extra point, and the win.

On Sunday, the Riveters used a strong second period effort to grab a 4-2 win over the Whale. Metro scored three goals in a span of 13:20 in the middle frame, which helped push them to the win.

Leila Kilduff opened the scoring more than halfway through the first period, scoring on a snipe from the slot off a pass from Mallory Rushton from the right side of the ice.

The offense exploded in the second period, starting with Madison Packer’s backhand goal just 2:11 in. Packer took the puck all the way up the ice on her own for the goal.

Just 5:12 later, Rebecca Morse made it a 3-0 game on a shot from the point. Dana DeMartino's shutout bid was spoiled with under six to play in the period, when Schwenzfeier slammed the puck in from in the front of the net to capitalize on a diving goaltender; DeMartino simply couldn't get over in time to make the save.

Before the Whale got too excited about a comeback bid, however, Cailey Hutchison got her stick on the puck in front of the net, regaining the three-goal lead for the Riveters with 4:29 to play in the period.

Vlasic would add a goal for the Whale late in the third, but it wasn’t enough to setup a late rally. The Riveters outshot the Whale 13-8 in the second period and 11-6 in the third period, really stepping up their game in the last forty minutes.

DeMartino only needed to make 15 saves for the victory.

The NWHL is now preparing for its All-Star Weekend, being held February 8-9 in Boston, Massachusetts. Stay tuned for a full preview next week, including roster details, players to watch, a breakdown of the weekend's events and more.