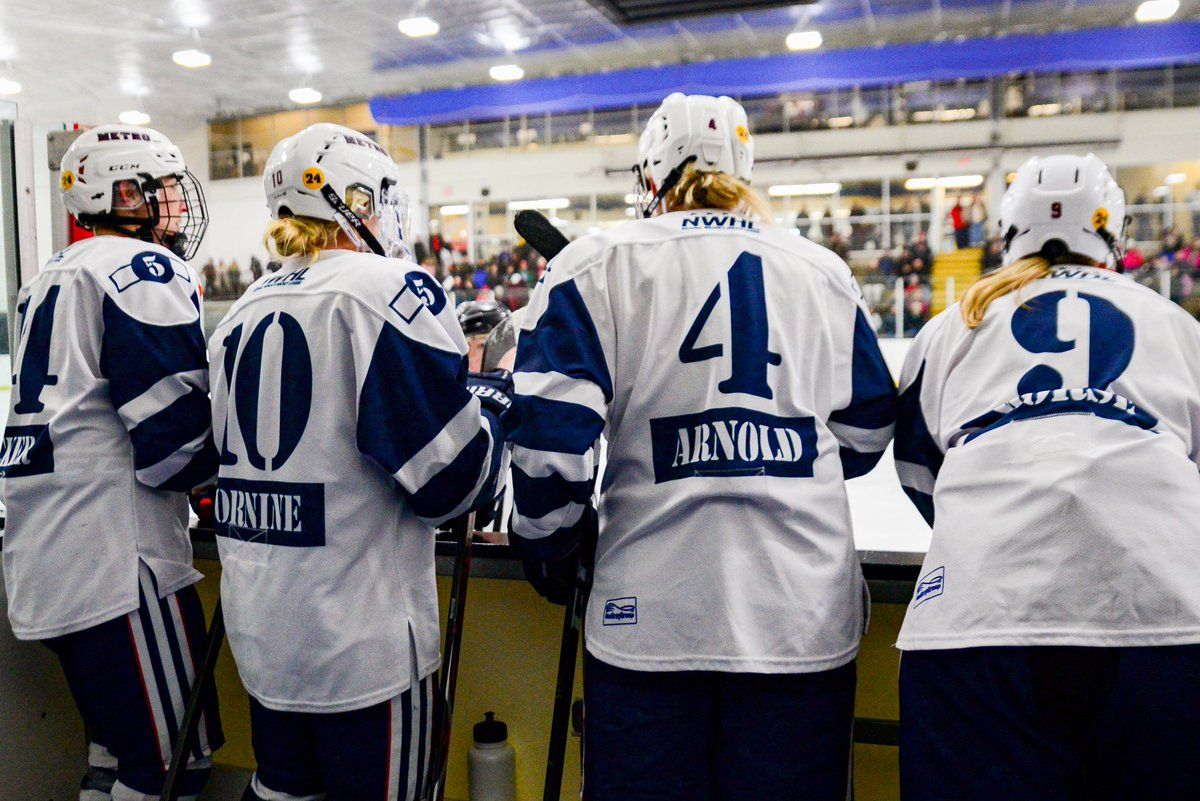 The Metropolitan Riveters and Minnesota Whitecaps, both fighting for second place in the NWHL, split their series this past weekend, with each team skating off with two of a possible four points. Elsewhere, the Boston Pride are now 17-0 after beating the Buffalo Beauts, who have lost six consecutive games.

Here are the league standings:

In the end, the Whitecaps and Riveters split their weekend series, but it began with a two-goal effort by Minnesota on Saturday that was just enough to top the Riveters. Metro rallied back with a 3-1 win on Sunday.

Meaghan Pezon opened the scoring on Saturday, giving her team a 1-0 lead on a messy goal right in front of the net. The Whitecaps were able to capitalize on the Riveters' lack of support for their goaltender and take advantage of the space in front of the net. Sam Walther was able to make the initial stop, but the Riveters couldn't clear the puck and there were too many Minnesota bodies in front.

After a pretty even first period, and a great chance early on by the Riveters to tie it, Sydney Baldwin added a power-play goal in the opening minutes of the second period to double Minnesota's lead. The defender skated around three Riveters players in an incredible individual effort, then beat Walther.

Although the Riveters put up 25 shots in the final 40 minutes of play, they were unable to get one past Amanda Leveille, and the Whitecaps powered to the 2-0 victory.

On Sunday, Minnesota came out roaring, but were unable to get anything past Sam Walther. They put up 17 shots in the first period, then added 34 shots in the second period. Overall, the Whitecaps were credited with 61 shots on goal – and only one of those found the back of the net.

The Whitecaps opened the scoring on the power play early in the second period. Walther was initially able to stop the shot from Meghan Lorence as she went down, but the puck trickled through to make it 1-0 Minnesota.

Quickly, however, the Riveters tied the game. Kate Leary scored just 37 seconds after Lorence's goal, in on a 2-on-1 with Madison Packer. Leary and Packer were able to capitalize on a Whitecaps defender's broken stick for the equalizer.

Despite being massively outshot in the second period, the Riveters kept the game tied into the second intermission. Undoubtedly, Walther was a huge part of Sunday's win, and she was deservedly named one of the league's players of the week, alongside fellow netminder Leveille.

The third period was all Riveters. Minnesota was unable to garner a shot on goal for at least the first seven minutes of action; before they could even get a shot, Colleen Murphy broke the stalemate just over six minutes into the third, scoring on a shot from the slot off a pass from Packer.

Packer would add an empty net goal with 28 seconds left in the game, helping the Riveters seal a 3-1 victory. The Riveters have now won three of their last four games, while the Whitecaps have won four of their last five.

Jordan Juron became the first player to sign in the NWHL after participating in a PWHPA showcase. She played in the New Hampshire showcase in October 2019, then signed a PTO with the Boston Pride this past weekend.

Juron's situation is certainly a unique one. She broke her spine early in the 2018-19 season and missed nearly all of the NWHL's season as a member of the Beauts. When the PWHPA players elected to sit out from playing in a pro league this season, she was living in Buffalo and wound up skating with the local PWHPA region of players.

A short time later, she moved to Syracuse, NY (about 2.5 hours from Buffalo) for a job opportunity. The move meant that Juron could no longer realistically find consistent ice time with the Buffalo region players, although she did play in the PWHPA showcase in New Hampshire.

She found herself in Buffalo on Saturday morning, and sat down for coffee with Pride mainstay Kaleigh Fratkin. A short time after their conversation ended, the Pride's coaching staff reached out to Fratkin to inquire if Juron would be interested in joining them for the weekend. She happened to have her skates and gear in her car, as she had planned to go ice skating in the afternoon.

"The offer was there, and I just wanted to play," she said. "All politics aside, with everything that's going on, I just wanted to get back out on the ice, have some fun and play with my friends."

As for joining the NWHL after being a part of the PWHPA, she said it all comes down to one thing: the sport. Juron had nothing but positive things to say about both the NWHL and the PWHPA.

"It's hockey," she said. "We all play the same game. It's the same rules, the same ice, we're all the same players... Boston's undefeated. They're going to make a great run," she added. "There's a bunch of great players in that locker room. Jillian Dempsey's a top-notch, elite player and there's others in there as well."

"Obviously, the PWHPA has a lot of the national team players, so... it's hockey," she said. "We all want to play. Is there a little bit of disparity here and there? Yes, but at the same time, everyone's going out there, trying to win games, trying to compete. At the end of the day, that's what's important."

Juron's future with the NWHL at this point is in a state of flux. She may join the Pride for practices or games as her schedule permits, including this Sunday's game in Boston against the Whale.

The Pride extended their perfect season, setting a new NWHL record for wins in a season (17), beating their own record from the 2016-17 season. The Pride put up a dominant effort in both games against the Beauts this weekend, with a 5-2 win on Saturday and a 7-2 win Sunday.

Saturday's game was a penalty-filled affair, with 14 minors handed out over the course of 60 minutes. It should come as no surprise, then, that special teams played a part in the game; the Pride scored twice on the advantage, while Buffalo capitalized on the power play once.

After Sara Bustad was sent off early in the game, the Pride wasted no time on the power play. Lexie Laing deflected a puck out in front of the net, giving her team a 1-0 lead just 2:07 in. As the first period went on, the Beauts had some struggles breaking out of the neutral zone and struggled at times to put quality shots on net.

The Pride jumped out to a two-goal lead in the final minute of the opening frame. With about 43 seconds to play, Lauren Kelly beat Mariah Fujimagari on an innocent-looking shot between her glove and pad off a pass from McKenna Brand.

Buffalo was finally able to beat Victoria Hanson midway through the second period, when Erin Gehen scored her first goal of the weekend. After a chance at the other end, Gehen and Brooke Stacey led the Beauts on a 3-on-1. Gehen passed to Stacey, who passed the puck back to Gehen, who shot the puck high and into the net.

Just as it seemed like the Beauts could be gaining some momentum, Tori Sullivan regained the two-goal lead for the Pride. Boston cycled the puck throughout their zone, and Buffalo was unable to gain possession. Eventually, a shot down low by Mallory Souliotis was deflected by Sullivan and went high, over the netminder.

Overall, Boston outshot Buffalo 30-16 in the first forty minutes of play. The Pride would add two more goals in the third period en route to the 5-2 victory.

Captain Jillian Dempsey opened the scoring in the final frame, scoring a beautiful goal on a backhand on a breakaway. More than halfway through the period, Marie-Jo Pelletier closed the gap for the Beauts when she scored on the power play on a shot from the faceoff circle to Hanson's right.

Lexi Bender sealed the win for the Pride, scoring on a power play that was called just seconds after Pelletier's goal. Overall, Boston outshot Buffalo 38-28 in Saturday's win, and Lauren Kelly led the team with three points.

When the teams rematched Sunday, the Beauts switched up many of their lines. Initially, this did seem to provide a spark for the underdog squad, as they scored the first two goals of the game to find themselves in the lead. Ultimately, however, they were unable to squash the Pride's offensive threats and allowed seven unanswered goals en route to their sixth consecutive loss.

Buffalo took the lead just 30 seconds into Sunday's contest, when Gehen poked a loose puck into the net after she was unable to solve Lovisa Selander on the initial shot. The Beauts doubled their lead a short time later on a 5-on-3 goal from Marie-Jo Pelletier, but that would be all the offense they'd find.

Carlee Toews opened the scoring for Boston on the power play with under six minutes to play in the first period. (This goal is currently being officially credited to Tori Sullivan, but certainly looked like credit should go to Toews.) Just 34 seconds later, Lauren Kelly's shot from the point made it through and tied the game for the Pride.

Before the first period was over, the Beauts got into penalty trouble again, and Boston took a 3-2 lead as Toews put the put in high over Fujimagari, who went down too early. From there, things just kept getting worse for Buffalo.

Sullivan added another power play goal midway through the second period. Boston then scored twice in a span of 45 seconds to take a commanding 6-2 lead. Emily Fluke scored amid a scramble around the net before Briana Mastel recorded her first career NWHL goal, putting the puck in the net through the five hole.

Kelsey Neumann came in relief for the Beauts' in the third period. She allowed one goal, as Mallory Souliotis tallied the Pride's seventh goal of the afternoon, again on the power play, with 3:31 to play. With the win, the Pride maintain their perfect record, now 17-0, and set a new NWHL record for wins in a season.

The league returns to action this weekend, with all five teams playing at least one game. The Riveters and Whale face off on Saturday night (6:30 PM Eastern), before the Whale square off against a tough Boston team on Sunday (2:30 PM Eastern). The Beauts travel west to face the Whitecaps on Saturday (7:00 PM Central) and Sunday (1:00 PM Central).

In other news, fan voting for the NWHL All-Star Game closes on Tuesday evening. A full roster of players selected to the game is expected to be announced later this week. The 2020 All-Star Weekend is being hosted by the Boston Pride at Warrior Ice Arena on February 8-9. Tickets are available here.