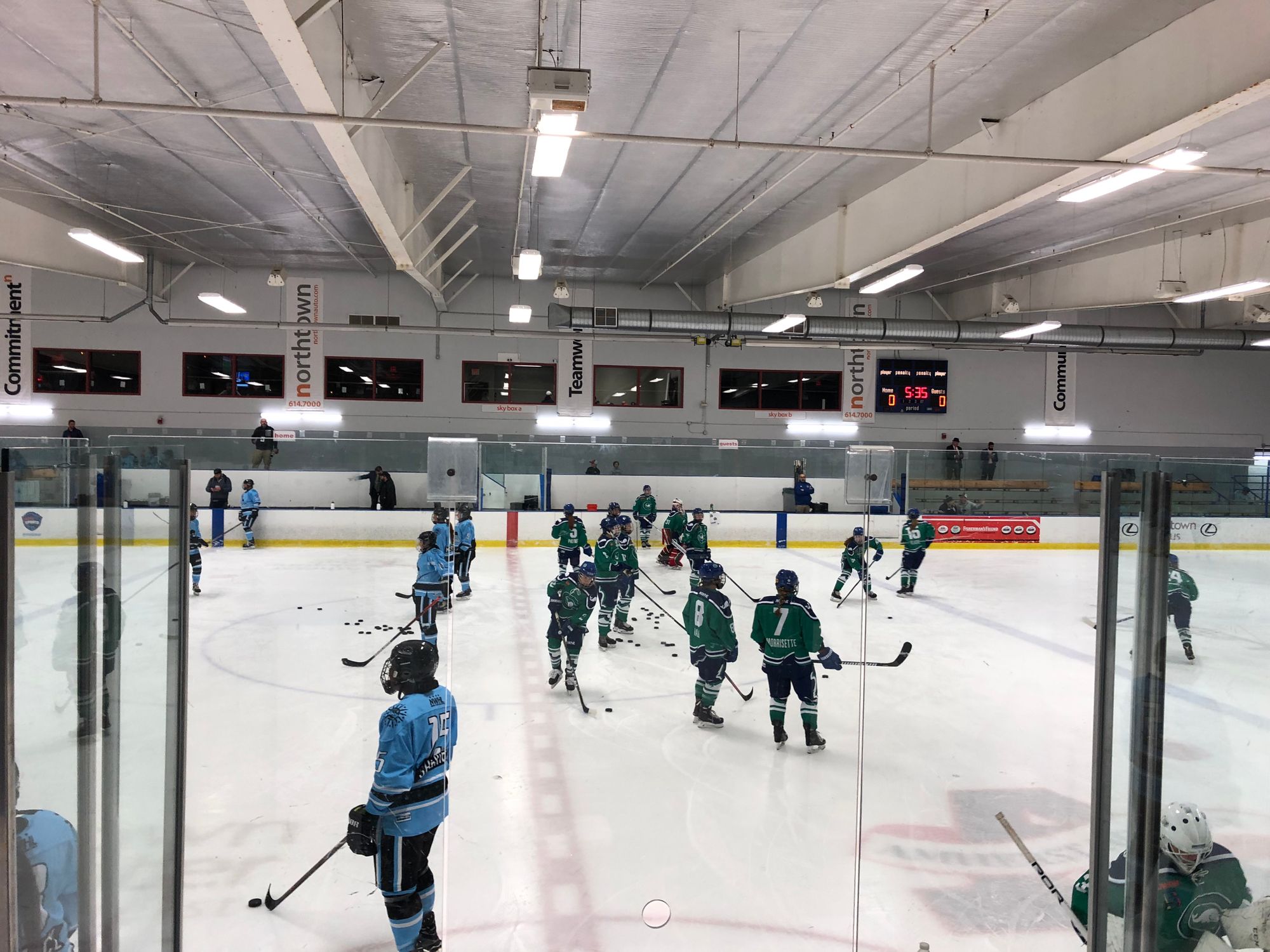 The Boston Pride remain undefeated in NWHL action this season after sweeping their weekend series against the Minnesota Whitecaps, while the Buffalo Beauts captured a pair of wins over the Connecticut Whale.

The Pride proved why they are the team to beat this season with 3-1 and 5-2 wins over the Whitecaps this weekend, respectively. Lovisa Selandar made 82 saves over the course of the two games, while McKenna Brand had a pair of goals and a whopping 16 shots on goal. For Minnesota, Amanda Leveille recorded 81 saves, while Jonna Curtiss also put up 16 shots.

Both teams showed their speed early, with great end-to-end action filling up the first few minutes of the game. Alyssa Wohlfeiler found the back of the net in the opening seven minutes off a wrist shot from below the faceoff circle, giving the Pride a 1-0 lead.

The game remained pretty even-keeled as the clock ticked away, but Boston's McKenna Brand doubled her team's lead more than midway through the second period. Brand capitalized on a 2-on-1 opportunity for her fifth goal of the season.

The Pride made it 3-0 on Kaleigh Fratkin's goal early in the third period. As Boston held onto the puck and cycled it throughout the zone, pressuring at the blue line to keep it in, Fratkin released a slapshot that got through Leveille and into the net.

Selander's shutout bid was spoiled with about two and a half minutes remaining in regulation when Minnesota's offensive powerhouse Allie Thunstrom got the puck behind the play and took a speedy wrist shot to make it 3-1.

Less than 24 hours later, the teams hit the ice again for Sunday's rematch. The Pride had several power-play chances early, including a lengthy 5-on-3 followed almost immediately by another advantage, but were unable to capitalize.

As the opening frame went on, Minnesota became more disciplined, stayed out of the box and found their game, but it was Boston who struck first. Finally, who else but Brand would get the Pride on the board? Jillian Dempsey and Christina Putigna made several key passes to get the puck to Brand, who found the back of the net.

Just 40 seconds later, Tori Sullivan doubled the lead. Sullivan capitalized on an essentially empty net after the puck bounced oddly off the end boards, making it a 2-0 game.

In the opening minutes of the second period, the Whitecaps finally got on the board when Sydney Baldwin released a slapshot from the point. Lexie Laing regained the two-goal lead for the Pride later in the middle frame, scoring on the power play. Laing redirected a point shot from Lauren Kelly.

Minnesota got one back on the power play early in the third period, but they were unable to get enough offensive momentum going to rally for a comeback. Stephanie Anderson scored the second goal for the Whitecaps from right in front of the net, capitalizing with a quick turnaround shot.

Mary Parker and Christina Putigna added goals later in the third, and the Pride finished Sunday's game with a commanding 6-2 win.

The Beauts captured a pair of wins over the Whale, with 5-4 and 6-4 victories, respectively. Marie-Jo Pelletier had the overtime game-winner Saturday, while Brooke Stacey scored three times in the two games. For the Whale, Shannon Doyle put up a strong performance in both games, with three points (1G, 2A), 12 shots on goal and four blocked shots.

Connecticut started off strong Saturday. Rookie Jane Morrisette wasted no time getting her first and second NWHL goals. Both came on the backhand and from the same side of the ice; Doyle quickly made it 3-0 just over halfway through the first period with a power-play tally a short time later.

Buffalo found their legs in the second period as Taylor Accursi picked up a goal on the rebound on the advantage. Both teams had penalty kills and power play chances as the game went on, and the Beauts struck again on the power play later in the second period. Lenka Čurmová notched her third goal of the season to close the gap to one.

The Whale got one back on the power play early in the third period on a goal from Sarah Hughson, but just as quickly, Stacey scored. Just over a minute later, Kim Brown tied the game with her first NWHL goal.

The game remained tied through the end of regulation, despite more penalties - including a lengthy 5-on-3 in favor of Connecticut. The Whale even started off overtime with the two-player advantage, but were unable to capitalize.

Finally, the Beauts found themselves on the advantage with Jordan Brickner in the box for hooking late in overtime. With just 24.8 seconds left in the extra frame, Marie-Jo Pelletier tapped in a puck on the side of the net to give the Beauts their second win of the season. It was Pelletier’s first NWHL goal.

It was a penalty-filled affair, with 44 penalty minutes handed out over the course of the game. As soon as one penalty ended, it seemed, another was handed out. As a result, the Whale scored twice on the power play, while the Beauts scored three times with the advantage.

But, as Doyle pointed out, having so many penalties called isn't ideal for the flow of the game.

"It really does kill the momentum of a game when there's just repeated penalties on both sides," she said. "You know it's a weird game, the refs are killing the flow, when you get irritated that they called one on the other team. You're just like, that was just a part of the play. You're just killing that momentum and the intensity of the game... Whenever there's more penalties than there are points on the ice, I always feel like there's just something wrong."

The officiating crew remained mostly the same for Sunday's game, but it was somewhat calmer, with eight minor penalties – and one major penalty/game misconduct – called.

Both teams also went with similar lineups but switched goaltenders. Kelsey Neumann made her first NWHL start, while Cassandra Goyette started for the Whale. The Beauts started off with a strong effort in the opening minutes. They forechecked hard to keep the puck in the zone; the Whale momentarily got it out, but the Beauts carried it right back in. Iveta Klimášová took an initial shot, and Brooke Stacey, coming down the right side, pounced on the rebound to make it 1-0.

Just over a minute later, Taylor Accursi doubled Buffalo's lead with a power-play goal. After a scramble with a few different chances, Accursi capitalized on a bouncing puck. With netminder Cassandra Goyette still down in the butterfly on the other side of the net, Accursi had an open side of the net to make it a 2-0 game just over four minutes into the game.

As the opening frame went on, both teams had chances both on even-strength and with the advantage. Kayla Menegin finally put the Whale on the board with just over five minutes remaining in the period, cutting Buffalo’s lead in half momentarily. Meneghin went from her backhand to forehand and scored on the five-hole.

Quickly, however, the Beauts rallied. Cassidy MacPherson recorded her first career goal on the power-play before Marie-Jo Pelletier put Buffalo up by three goals. Megan Delay took a shot from the point, which MacPherson tipped in from in front of the net. Pelletier's goal came from a shot near the face-off circle to Goyette’s left, which bounced a couple of times before finding its way in.

The Whale elected to swap goaltenders to open the second period, putting Shelly back in. Goyette allowed four goals on 11 shots faced in the opening frame. It didn't take long for Connecticut to make an impact in the middle frame; after a fair amount of time in the defensive zone, the Whale finally got a break on a 3-on-2 the other way, and Jordan Brickner made it 4-2.

The back-and-forth action continued, with Čurmová shooting a puck over Shelley and into the net just minutes later. With the score 5-2 in favor of Buffalo, the Beauts also switched goaltenders. Kelsey Neumann appeared to suffer a lower-body injury, so Mariah Fujimagari came in her relief with just over 14 minutes left in the second period.

Emma Vlasic and Haley Payne scored for the Whale in the third, but Buffalo ultimately held on for the win. Stacey added her second goal of the afternoon on an empty-net tally, and the Beauts skated away with a 6-4 victory and two wins on the weekend.