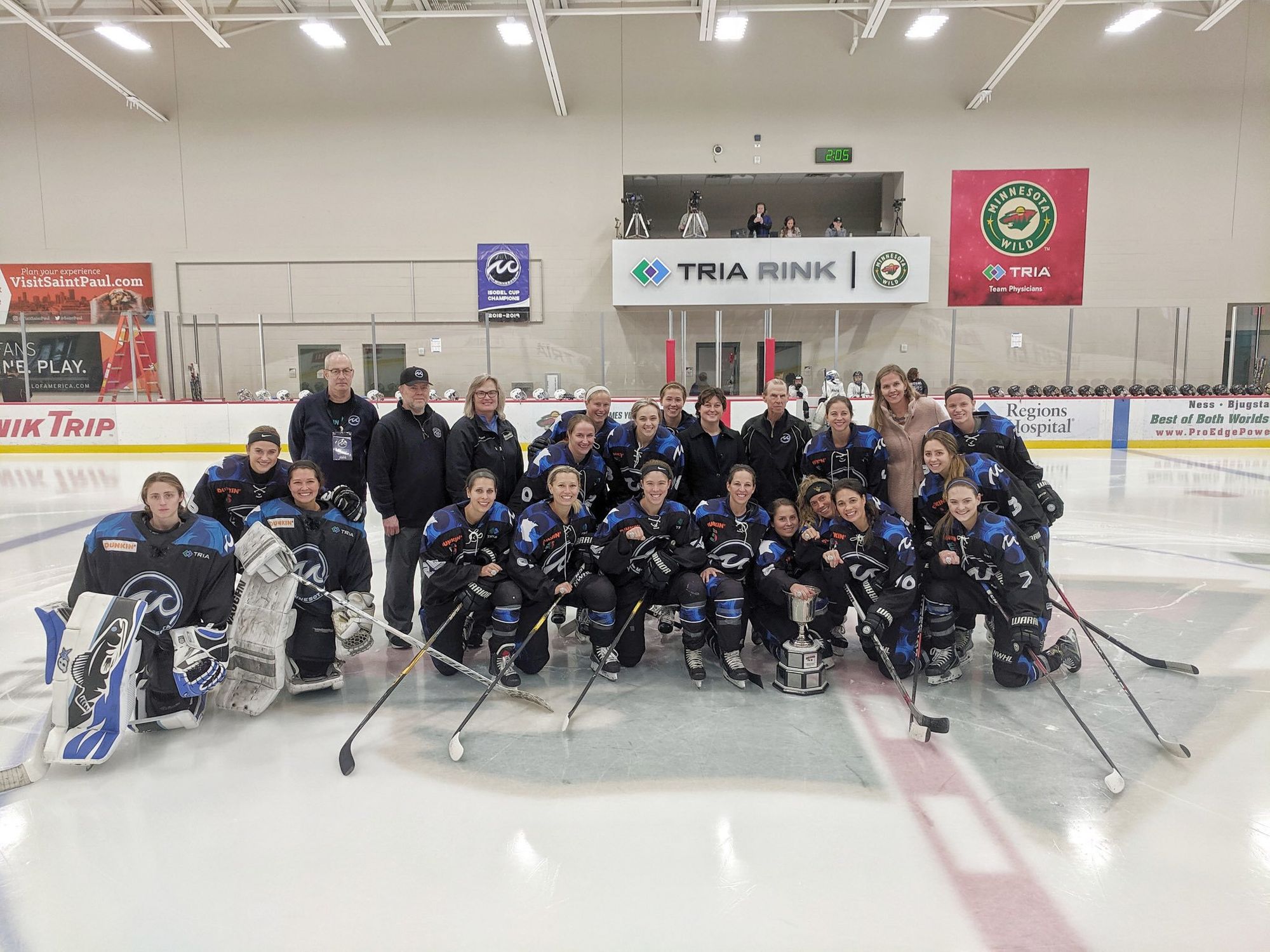 The Boston Pride swept their weekend series over the Buffalo Beauts, while the Minnesota Whitecaps and Metropolitan Riveters split their series in NWHL action.

The Pride were absolutely dominant this weekend in their 4-2 and 8-1 victories over the Beauts. Boston's offense showcased its speed and strength, overpowering Buffalo and severely limiting their zone time over the course of the pair of games.

Boston outshot Buffalo by a 19-4 margin in the first period on Saturday, and took a 1-0 lead with just over a minute to play in the opening frame. Lexie Laing recorded her first career NWHL goal. The Pride cycled the puck around the zone, eventually getting the puck in front of the net. Amid a scramble, Laing managed to poke the puck past Mariah Fujimagari.

Carlee Toews doubled Boston's lead in the second period. Toews, Laing and Tori Sullivan had a 3-on-1 and easily got around the Beauts defender to make it 2-0.

Christina Putigna made it a three-goal lead in the final minutes of the second period on a rocket shot from down low to the left of Fujimagari. Fujimagari got a piece of it, but not enough to keep it out of the net. Toews added another goal with 55 seconds left in the period.

The Beauts managed to find the back of the net twice in the third period, but it wasn't nearly enough for a complete effort or two points. Brooke Stacey scored on a penalty shot midway throuogh the third after being held by Putigna, who hooked her on the wrist from behind. Iveta Klimášová added a late goal for her first career NWHL tally.

Boston finished the night edging out Buffalo in shots, 45-20, and capturing the win.

On Sunday, it didn't take long for the Pride to take the lead. Just 1:45 into the game, McKenna Brand scored her first of three goals in the opening frame, using her speed along the wall to beat several Beauts players. Brand quickly made it 2-0 off a snipe from in front of the net a few minutes later.

Stacey broke up the Pride's momentum for a minute, scoring her third goal of the season. Stacey and the Beauts' offense got Lovisa Selander moving, and Stacey capitalized on an open side of the net.

That, it turned out, was all the Beauts could muster in Sunday's loss.

Brand completed the hat trick with still over seven minutes to play in the opening period; as the Pride continued to cycle the puck, they took a 4-1 lead on Emily Fluke's first goal as a member of the Boston organization later in the first.

Buffalo switched goaltenders in the second period after Boston went up 5-1. Mariah Fujimagari allowed five goals on 16 shots faced in 23:15; Kelsey Neumann came in to relieve her, but it wasn't enough to help the Beauts turn things around.

Lexi Bender added a goal off a shot from the point, before Toews scored shortly after from a crowd in front of the net. Captain Jillian Dempsey scored Boston's eighth goal in the third period on a shot that squeezed through two Beauts players and the netminder.

Selander recorded 22 saves, while Neumann finished the game with 23 saves. Victoria Hanson also saw some action for the Pride, with five saves in 19:40 played.

The Whitecaps showcased why they are still the team to beat this season in Saturday's dominant 9-2 win over the Riveters in their home opener.

The Whitecaps got off to a hot start, with Curtis making it 1-0 just 49 seconds in. Curtis, battling two Riveters defenders, shot the puck on her backhand and through the crowd, five-hole into the net.

Kate Leary tied the game for the Riveters just over eight minutes in. Leary's goal came on the rebound on a nice follow-up after an initial shot in front of the net. Although Amanda Leveille made the first save, she couldn't stay with it, and Leary had an open side of the net to capitalize on.

Just over four minutes later, the Riveters took a 2-1 lead on a goal from Rebecca Morse. Morse took advantage of a bouncing puck in front of Leveille after a shot from Cailey Hutchison.

The lead, however, lasted only about 45 seconds. From that point on, it was all Minnesota. Curtis tied the game, using her speed and tipping in a shot from in front of the net. Allie Thunstrom gave the Whitecaps a 3-2 lead later in the first period on a power-play goal after the puck popped up to the side of Walther.

Minnesota found itself shorthanded to open the second period, but it didn't matter much. Just 57 seconds into the frame, Nicole Schammel doubled the Whitecaps' lead.

Meghan Lorence scored the next two goals for Minnesota, including their second shorthanded tally of the night. Lorence's initial shot was saved, but a rebound bounced up and gave Lorence a largely empty net for the first goal. Her second goal, several minutes later, came shorthanded on a break, with Lorence picking Walther's pocket to her right side.

With that, the Riveters swapped goaltenders, putting Dana DeMartino in net. Walther's night ended with 11 saves on 17 shots faced.

Curtis completed the hat trick with under five to play in the second period. Schammel and Sydney Baldwin added goals in the third period to seal the 9-2 victory.

Sunday's game was much more tightly-contested. The teams remained scoreless until the final six minutes of the opening period. Audra Richards opened the scoring against her former team on a shot from down low to the right of Walther. Moments later, the Riveters tied it off a nice play from Mallory Rushton and Kendall Cornine.

As the game went on, Walther was critical in keeping the Riveters in the game as she made several key saves on dangerous Minnesota chances. Captain Madison Packer put the Riveters in the lead on a one-on-one break. Packer beat the Whitecaps defender and sniped the puck into the corner of the net.

Walther continued to put up a strong performance, but the Whitecaps capitalized on a rebound later in the second period to tie the game at two. Boulier found the back of the net after Walther make a sequence of saves and stayed down with her pads stacked.

The teams remained locked at two, until Cornine found the back of the net again early in the third period. Cornine's goal, which gave the Riveters a 3-2 lead, came amid a scramble in front of the net. With their second lead of the weekend - they held a brief lead in Saturday's loss – the Riveters seemed to clean up their passes and played a tight game for the rest of the third.

The lead, however, didn't stand. With under three minutes to play in regulation, the Riveters misplayed the puck at the blue line. Speedy forward Thunstrom found the puck and took off on a breakaway, finding the back of the net to make it 3-3.

The teams headed to overtime, but it took just over 30 seconds for Morse to claim the extra point for the Riveters. Her shot beat Baldwin and went top-shelf behind Leveille to give Metro its first win of the season.

Walther had 37 saves in the win, while Leveille stopped 21 shots.

The Pride, building on a three-game winning streak, head west to face the Whitecaps for a pair of games next weekend. Saturday's puck drop is set for 6:30 PM Eastern, followed by Sunday's 2:30 PM Eastern game.

The Whale return to action, visiting the Beauts for two games. Saturday's game is an early start (11:30 AM Eastern), while Sunday's game is at 1:30 PM Eastern.