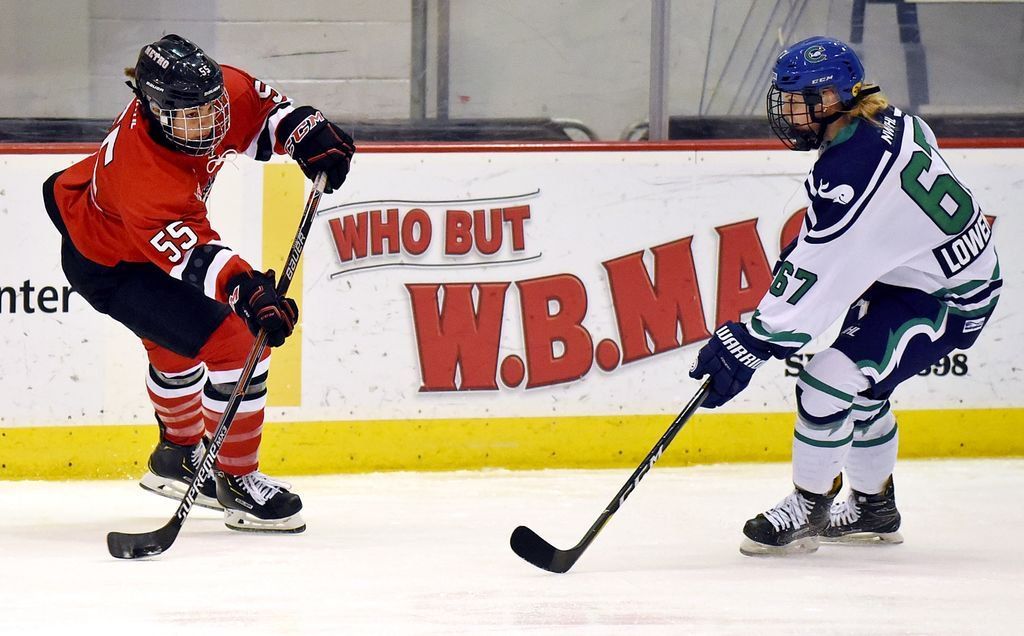 Following Thursday's play-in game, four of the five teams in the National Women's Hockey League are left to vie for the ultimate prize: the Isobel Cup. The league-leading Minnesota Whitecaps will host the Metropolitan Riveters (who beat the Connecticut Whale 5-2 on Thursday), while the Buffalo Beauts host the Boston Pride.

These four teams will play semifinal action on Saturday and Sunday, with the winning teams set to face off in the championship next weekend at the home of the highest remaining seed – which could be Minnesota, Buffalo, or Boston.

All games will be broadcast on Twitter via the NWHL's profile.

This game between two of the NWHL's top three teams will be an incredibly interesting one to watch. Expect hard, fast-paced hockey between these two rivals, who have squared off in two of the three Isobel Cup Final games in the NWHL's existence. We already know that won't happen this year, but a semifinal will do nicely.

The Beauts are coming into the playoffs on a hot streak. They won seven straight before dropping their final game of the season in a shootout to the Riveters, and at times, certainly seemed unstoppable. But the Pride have their own successes to be, well, prideful about; they won three in a row before falling to a tough Whitecaps team in their season finale.

The Beauts also went undefeated at home this season, so home ice is certainly going to be an advantage in this one.

The keys for either team: scoring first. In each of the four games in the season series, the team that scored first ended up winning the game. In addition, special teams are always key in playoffs. Buffalo went 2-for-13 on the advantage against Boston this season, while the Pride went 1-for-12 against the Beauts. The Beauts also recorded 40+ shots in each of the last two meetings with Boston.

For Buffalo: Forwards Hayley Scamurra and Maddie Elia had incredible seasons for the Beauts. Scamurra recorded eight points (2G, 6A) in four games against the Pride this season and led the NWHL in points scoring during the regular season (20). Elia, meanwhile, finished the season atop the league in goals (12) – a third of which came against Boston (4G, 3A).

For Boston: Captain Jillian Dempsey proved to be a big piece of the offense for the Pride this season, particularly against Buffalo; she put up four goals in as many games versus the Beauts and finished the season with 14 points overall. Gigi Marvin is always a force to be reckoned with, but was held to just two points (1G, 1A) against Buffalo this season. She's been playing forward this season but has also been dealing with an injury.

Goaltending: Katie Burt has been the goaltender for the Pride this season, going 11-5-0 with a 2.26 GAA and .923 save percentage. There's no doubt that the Pride go with Burt in the playoffs, but it's less clear of a situation for the Beauts. Both Shannon Szabados and Nicole Hensley performed well during the regular season, but it's a toss-up as to who they go with in this single-elimination playoff. Szabados finished the season a league-best 1.49 GAA, but only marginally better than Hensley's 1.50. Hensley's .935 save percentage was slightly better than Szabados' .934 save percentage.

Most anyone looking at the regular-season statistics for these two teams will expect the Whitecaps to come out on top. They won five straight to end the season and finished atop the NWHL in their first season in the league. Minnesota lost just four times all season long, and their 24 points were literally triple what the Riveters accrued.

But here's the thing: with a single-elimination game, anything can happen. All you need is a small mistake here, or a slapshot there, and the course of the game – and thus, the entire playoffs – can change. Don't take the Riveters lightly; anything can happen, especially with Katie Fitzgerald in net. The Riveters are also riding the high of beating the Beauts in their final regular season game, ending Buffalo's impressive winning streak, and snagging an impressive 5-2 win over the Whale in the play-in game.

Looking at the regular season, obviously things do seem to be in Minnesota's favor. The Whitecaps swept the season series, outscoring the Riveters 18-6. But these teams haven't faced each other in months; their meetings came at the beginning of the season, and a lot has changed since those days.

One interesting facet of this match-up will be special teams. Neither team found great success on the power play against the other this season. In the four meetings, the Whitecaps scored on just one of 12 power play opportunities. The Riveters scored on one of 13 opportunities. If a team can solve that equation and figure out how to find quick success on the PP, it could easily turn the tide of Sunday's meeting.

For Minnesota: Forward Jonna Curtis was stellar in four games against the Riveters; she recorded seven points (3G, 4A). Curtis finished the season tied for second in the league in points (19) with Buffalo's Maddie Elia. Hannah Brandt also found success offensively, with six points (4G, 2A) against the Riveters this season. Elsewhere, Lee Stecklein recorded seven assists in the season series.

For Metro: Madison Packer registered three goals this season against the Whitecaps, meaning she accounted for literally half of her team's goals versus Minnesota. Amanda Kessel was also in on half of the Riveters' goals, as she recorded three assists in the season series. Her 17 points on the season tied her for fourth overall in league standings.

Goaltending: What a treat this game will be in terms of goaltending, with Amanda Leveille almost certainly facing off against Katie Fitzgerald. Both appeared in all four games in the season series; Leveille stopped 91 of 96 shots faced, including two shutouts. Overall, she finished the season with 2.09 GAA and .923 save percentage. Fitzgerald stopped 75 of 91 against Minnesota and overall had a 3.32 GAA and .886 save percentage.

You'll find both of these semifinal games on the NWHL's Twitter page at game time: @NWHL