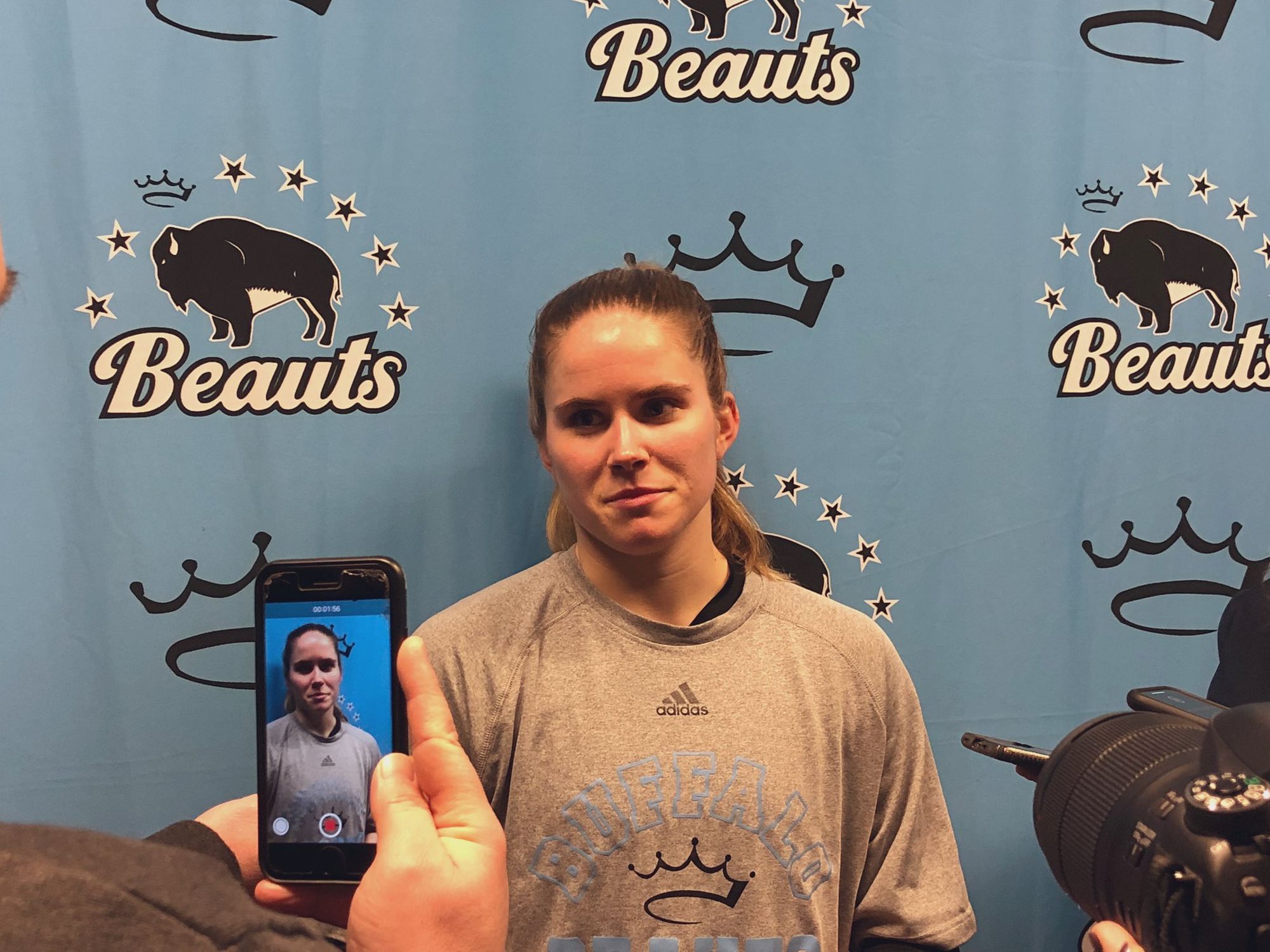 In the lone NWHL game this weekend, the Buffalo Beauts outpowered the Boston Pride en route to a 4-1 victory that evened the two teams in league standings.

Maddie Elia and Dani Cameranesi both registered multiple points in Buffalo's dominating 4-1 win over Boston, the final meeting of the regular season between the two teams. The Beauts won three of their four meetings this season against the Pride.

The Beauts opened Saturday's game with a few quick shots on goal, but the most dangerous play came on a close shot by Dani Cameranesi just over six minutes in. The teams remained scoreless, even through some 4-on-4 play and a brief Buffalo advantage.

Annika Zalewski finally put her team on the board just over the halfway point. Emily Pfalzer got the puck at the blueline and shot it in deep; Taylor Accursi picked it up behind the net and passed it to Zalewski in front. Zalewski shot the puck behind Katie Burt to give Buffalo a 1-0 lead with 9:44 to play in the first period.

"In any game, you want to put the first one in and just grab that momentum early," Zalewski said. "That was big for us to get the first goal and go from there."

Despite several more power play opportunities, the score remained 1-0 with twenty minutes in the books. Buffalo outshot Boston 16-8 in the first period, but began the second period with almost a full penalty to kill as Kelly Babstock found herself in the box.

Another successful penalty kill for Buffalo was followed by a fruitless power play. But it wasn't long after the advantage that the Beauts went up 2-0 on Maddie Elia's league-leading 10th goal of the season, and first of the afternoon. Dani Cameranesi had the initial chance on an opportunity right in front of Burt, and Elia pounced on the rebound.

Minutes later, Cameranesi scored a goal of her own to make it 3-0 after she picked up a pass all the way in the Buffalo zone off a tip from her teammate. Cameranesi skated the puck all the way to the other end of the ice and shot it over Burt.

"I've been yelled at a few times by my parents for not shooting the puck," she laughed after the game, noting that on her way down the ice, she was contemplating making the pass to Kelly Babstock. "I had my dad in the back of my mind and decided to shoot it, and got a little lucky there."

Exactly 60 seconds after Cameranesi's goal, the Pride finally got on the board thanks to captain Jillian Dempsey. McKenna Brand had the puck down low and passed it cross-ice to Dempsey, on the right side of Beauts netminder Shannon Szabados. The goal came on Boston's 10th shot of the afternoon.

More penalties ensued in the remaining minutes of the second period, including a roughing penalty to Burt. In the dying seconds of the period, Corinne Buie appeared to have scored, but it was ruled no goal as the officials said that Burt had the puck covered. It was another strong period for the Beauts either way, as they outshot Boston 19-4 in the second period.

Elia added her second of the afternoon with just 53.6 seconds left in the game, feeding off a backhand pass from Hayley Scamurra from behind the net. The goal was Elia's league-leading 11th of the season; she's the first NWHL player to hit double-digits in goals this season, and the first Beauts player to do so since the league's inaugural season. Kelley Steadman holds the Beauts record for goals in a season (13), though Elia is not far off. Hilary Knight still holds the league record for goals in a single season with 15 goals.

Elia also recorded 12 shots on goal in Saturday's game, setting new franchise and league records for shots in a game by an individual player. The previous record at both levels was 11, recorded twice by Shiann Darkangelo during her time in Buffalo and also once by Miye D'Oench.

One interesting note: although there were plenty of penalties – and as a result, plenty of power plays – neither team was able to capitalize on their special teams in Saturday's game. The Beauts went 0-for-6 on the power play, while the Pride went 0-for-4.

"Our whole team was in the zone tonight," Cameranesi said. "As you could tell, we had a lot of puck movement. I think that was key for us in the offensive zone, and taking care of defense first is kind of where we started. That gave us the ability to play on offense and have those opportunities."

Overall, the Beauts outshot the Pride 47-22 en route to the 4-1 victory, their fourth consecutive win. The Beauts haven't lost since December 29, 2018.

"We've come together as a team, and we've gotten comfortable with our systems and our style of play," Zalewski said. "We're building our team chemistry and once you get going, it's nice to just ride that."

Four of the NWHL's five teams are in league action next weekend, with both games coming on Saturday, February 2. The Buffalo Beauts travel to New Jersey to face the Metropolitan Riveters for a 2:00 PM Eastern faceoff. Madison Packer will miss that game to serve her one-game suspension.

Later that night, the Connecticut Whale travel to face the Boston Pride at 7:30 PM Eastern. Those are the last league games for a bit as the NWHL takes a break for the USA-Canada series and the NWHL All-Star Game in late February.