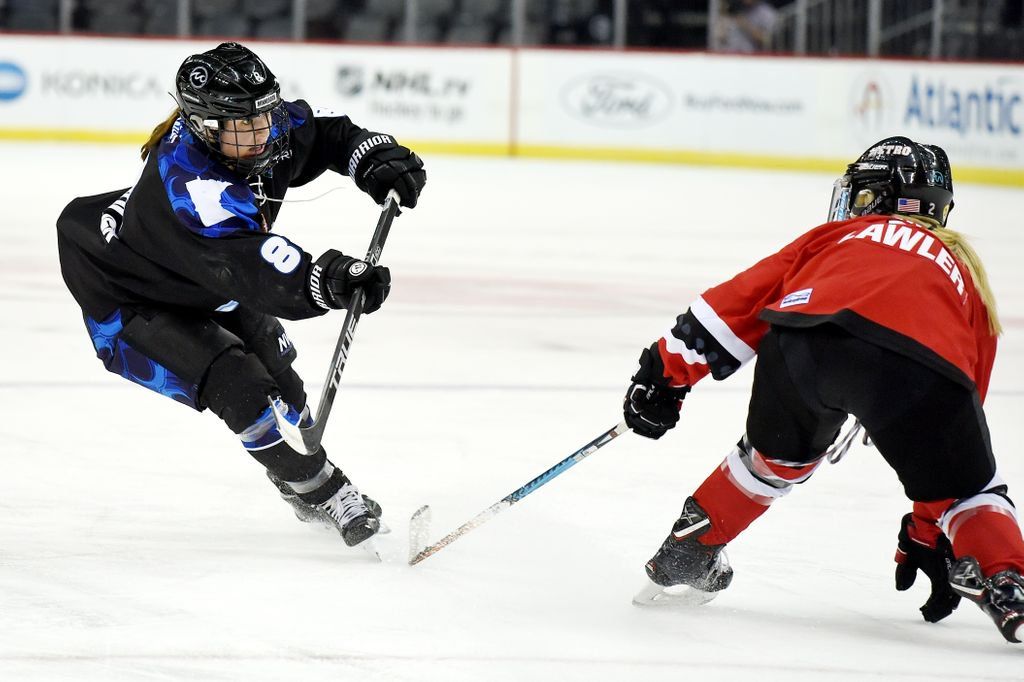 The Minnesota Whitecaps remain undefeated after a weekend sweep of the defending Isobel Cup Champions, the Metropolitan Riveters. Meanwhile, the Riveters have struggled early on and are still looking for their first win.

The Boston Pride captured two points over the Connecticut Whale, who are also still winless this season. The Buffalo Beauts were inactive this past weekend.

The Minnesota Whitecaps are certainly starting off their first NWHL campaign on a roll. Minnesota captured two wins against the Riveters this weekend, outscoring them 11-5 despite going 0-for-7 on the power play.

First up, the teams met for an afternoon puck drop on Saturday at the Prudential Center. The Riveters raised their Isobel Cup championship banner, but when it came time to hit the ice, they had trouble being cohesive despite an exciting, back-and-forth effort.

The Whitecaps got on the board first with under two minutes to play in the first period, as Chelsey Brodt Rosenthal made it 1-0 on a deflection of a shot from teammate Amy Schlagel.

Madison Packer evened the score 53 seconds later on a redirected shot from the stick of Riveters captain Michelle Picard. Packer was back in action after being taken off on a stretcher from the Riveters' last game.

The teams traded goals in the second period, with Amy Menke and Meghan Pezon tallying for Minnesota. Menke scored on a wraparound in her first NWHL game, squeezing the puck into the net behind Fitzgerald. Packer added her second goal of the game as she tucked in a nice shot from inside the faceoff circle, but the Riveters skated into the third period down a goal.

Just 1:34 into the third, Audra Richards evened the score with her first career NWHL goal on a rebound in front of Amanda Leveille. However, Hannah Brandt regained the lead for Minnesota halfway through the period. Jonna Curtis then added an empty-netter to secure the victory and maintain Minnesota's perfect record.

Amanda Leveille made 24 saves in the win, while Katie Fitzgerald stopped 17 of 21 shots faced.

It was much of the same when the teams rematched on Sunday afternoon at the Barnabas Health Hockey House. Katie McGovern opened the scoring for Minnesota in the first period, picking up a pass from Jonna Curtis in front of the net. A Riveters player narrowly missed the chance to intercept the puck, which ended up on McGovern's stick.

Allie Thunstrom – wearing a jersey with her name misspelled on the back – made it a 2-0 game minutes later. Thunstrom carried the puck into the zone, through several Riveters players, and swept it into the net behind Fitzgerald. Hannah Brandt added to her team's lead with a goal in the second period, deflecting a shot by Lee Stecklein from the blue line.

Audra Richards scored her second goal of the weekend off a past from Alexa Aramburu later in the period. Jonna Curtis would add another goal for the Whitecaps early in the third.

Although Madison Packer scored to cut the Whitecaps' lead, McGovern and Thunstrom each added goals later in the third period to seal the 6-2 win.

Katie Fitzgerald had 18 saves, while Kim Sass stopped all five shots she faced for the Riveters. For the Whitecaps, Amanda Leveille had 24 saves on 26 shots faced.

With this weekend's games under wraps, the Riveters and Whitecaps' season series is complete, with the Whitecaps sweeping the four games – two each in Minnesota and New Jersey.

Two goals in the third period helped carry the Pride to another win, this time a 4-2 victory over the Whale. Haley Skarupa registered two assists and six shots on goal, while Alyssa Gagliardi also added six shots for the Pride.

Boston started off the game on a good footing, with Emily Field getting them on the board just 35 seconds in. After some sustained zone pressure by the Whale, the puck came loose and Field picked it up near center ice. She carried it into the zone and craftily put it behind Meeri Räisänen.

Lauren Kelly scored on the power play early in the second period on a shot from the point to give her team the 2-0 lead.

The Whale rallied back to tie the game later in the middle frame. After the Whale made some nice moves to keep the puck in the zone, Katerina Mrázová scored on the power play for her first career NWHL goal.

Emily Fluke evened the score several minutes later, picking up a rebound in front of the net, but it wasn't enough to hold off the Pride from victory.

McKenna Brand scored from beside the net, and Gigi Marvin added a late goal for Boston in the third period to secure the win for the Pride. Räisänen made 28 saves for the Whale, while Katie Burt made 13 saves for the Pride in the win.

This coming weekend, one team's winning streak will come to an end as the Buffalo Beauts head to Minnesota to face the Whitecaps for a pair of games. Which will maintain their undefeated record? (At least through Saturday's 6:30 PM Central game – which is also the Twitter Game of the Week.)

Elsewhere, the Riveters and Pride face off at 7:30 PM Eastern on Saturday at Warrior Ice Arena. The Connecticut Whale are the inactive team this coming weekend.