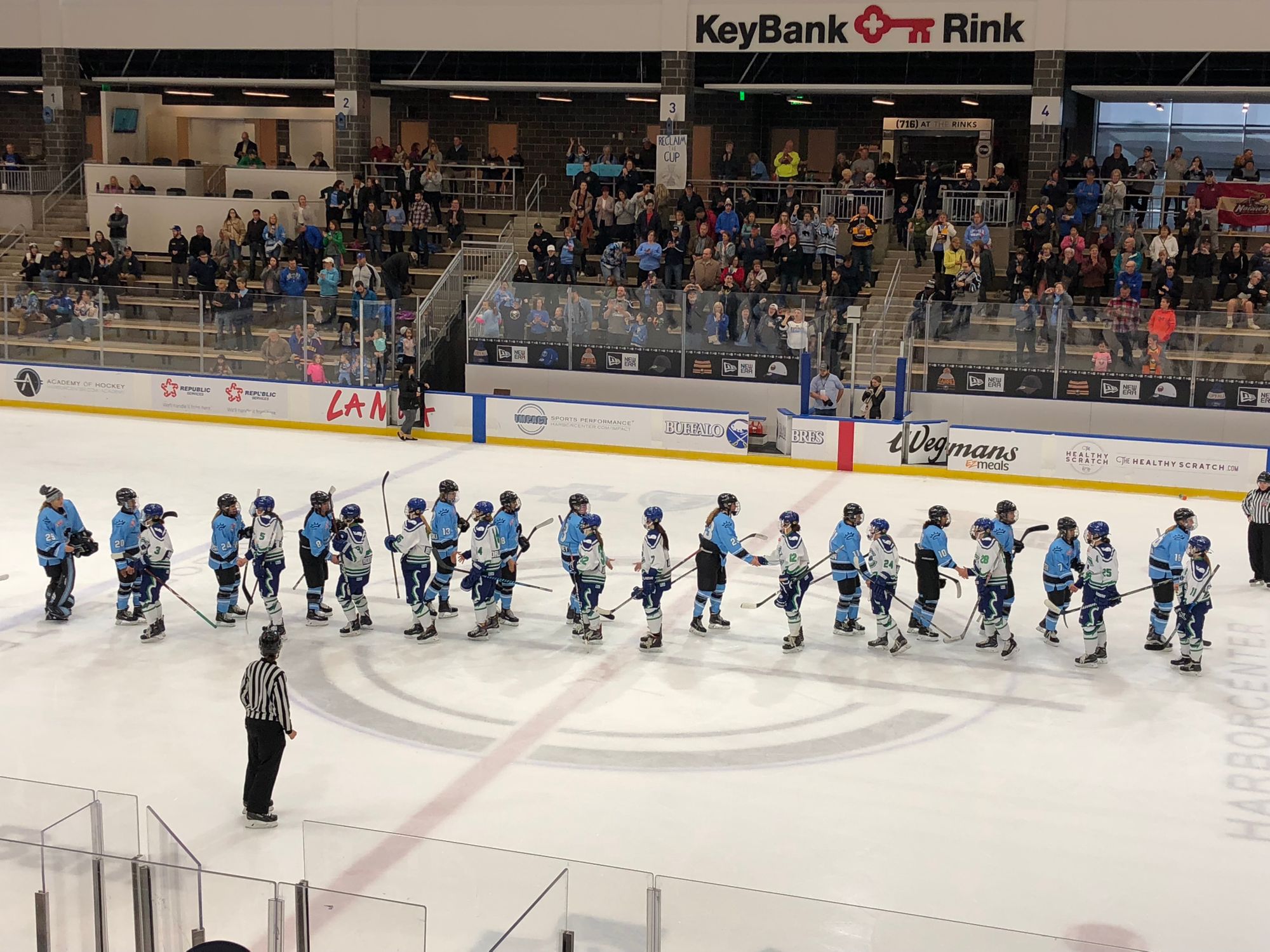 The NWHL's Buffalo Beauts recorded their second consecutive shutout against the Connecticut Whale, while the Boston Pride began their season with a bang, topping the Metropolitan Riveters 5-1. The Minnesota Whitecaps were inactive this weekend.

For the first time in franchise history, the Buffalo Beauts have recorded back-to-back shutouts and won their first two games. Last week, it was Nicole Hensley at the helm; this week, Shannon Szabados made her NWHL debut with a 7-0 win over the Whale.

Meeri Räisänen once again started in net for the Connecticut.

The Beauts opened the game with a few good chances at the hands of players like Dani Cameranesi and Julianna Iafallo, but Räisänen kept tight to the post to keep the puck out of the net. It didn't take long, however, for Buffalo to get on the board. Cameranesi made a swift diagonal cross-ice pass to rookie Savannah Harmon, who slapped the puck in top corner behind Räisänen for her first NWHL goal.

"I was just playing a regular shift and then Dani made that really great pass and I tried to shoot, tried to go upstairs, and it went in," Harmon said. "It took me a second to realize that it was in. I was super pumped."

Minutes later, Buffalo found themselves up by a pair as Annika Zalewski registered her first NWHL goal. The Beauts then had several power play opportunities before the opening period ended, but maintained the 2-0 lead after twenty minutes.

The good news for the Whale: they were able to put a lot more shots on net. Last weekend against the Beauts, they managed only 10 shots, a number they'd eclipsed before the halfway point of Saturday's game. Although the end result was still the same –  a shutout loss – it's certainly an improvement.

Maddie Elia stuffed the puck home on the Beauts' 21st shot of the game to make it 3-0 in the second period. Hayley Scamurra registered an assist for her fifth point of the season.

That's when things started to slow down for the Whale. They went nearly 10 minutes without registering a shot on goal; every time they had a rush started, they either found themselves offside or facing an icing call. They finally managed a few good chances near the end of the second period, but Szabados showcased her skill and made several huge saves at the buzzer to keep the puck out of the net.

"Sometimes those are tough ones as a goalie," Szabados said. "You've got to learn to stay mentally sharp during the game, while the puck's at the other end, during whistles."

The Beauts were relentless in the third period, adding goals from Lisa Chesson, Scamurra, Iafallo, and Corinne Buie to make it a 7-0 game. Iafallo's goal was the first of her NWHL career. The Whale swapped out Räisänen for Sam Walther prior to Buffalo's sixth goal, but she was unable to cap the Beauts' offense in her limited time in net.

Szabados registered the 22-save shutout in her NWHL debut. Räisänen allowed five goals on 28 shots faced, while Walther stopped four of six.

"They [the Whale] had a different gameplay than they had before and they played a pretty good game as far as we’re concerned, but we just feel that with the way we can control the game, if we’re not doing it, then we’re just cheating ourselves," said Beauts coach Ric Seiling after the win.

Seiling credited his defenders, who he says are all very mobile, something the Beauts' coaching staff is looking for this season.  Part of that has been pairing rookie Harmon with Blake Bolden. The duo played together last weekend and spent time in practice together during the week.

"She's super speedy and her shot is a rocket so it’s definitely super fun to play with," Harmon said of her D partner. "I keep telling her I just want to set her up for one-timers."  Harmon said that spending time on the power play together helps the duo learn more about each other and be more productive.

The Beauts will now head into an off week before heading to Minnesota at the end of October. They won't return home for a game until December.

"Keeping the foot on the pedal will be what we look to do moving forward," Szabados said. "But overall, two pretty solid games for a team that has a lot of new faces in the lineup."

The Pride started off their first game of the season strong and ultimately kept the defending Isobel Cup champions winless with a 5-1 victory on Saturday evening.

Boston saw a few good chances early, taking advantage of several odd-player rushes, but it would be the Riveters who would get on the board first once they found their legs. Amanda Kessel scored her 10th career NWHL goal on Pride netminder Katie Burt to make it 1-0. Kessel picked up a spinning puck right in front of Burt after a chance by her teammate and finished off the play by shoveling it into the net.

The Riveters' first lead of the season would be short-lived when the Pride got on the board just 1:03 into the second period as McKenna Brand tallied her first career NWHL goal. Brand carried the puck into the zone and took a quick wrist shot from the far-side circle to tie the game.

Despite several power play opportunities on both sides, Brand's goal would be the lone tally of the second period. The Pride, however, came out roaring in the third period, scoring four goals in the final 17 minutes of the game.

Just shy of three minutes into the third, Dana Trivigno gave her team the 2-1 lead. Trivigno picked up the puck off a Riveters player's stick, intercepting it and firing it into the net.

It was a scary moment shortly after when Madison Packer appeared to have taken a hit to the head. The game was delayed for several minutes as she remained down on the ice and was eventually taken off on a stretcher. The NWHL has provided an update on her condition, and was happy to report that she was not seriously hurt:

After the stoppage, the game picked it up with the Riveters on a power play, which they were ultimately unable to capitalize on. Minutes later, the Pride took a 3-1 lead after Haley Skarupa carried the puck into the zone and shot it top-shelf over Katie Fitzgerald.

Pride captain Jillian Dempsey added to her team's lead with her first goal of the season later in the third period. The Pride were aggressive in keeping it in the zone and had several good chances before Dempsey picked up a feed from Lexi Bender from behind the net and scored from right in front.

Emily Field scored in the final minute after redirecting a point shot from Lexi Bender to make it 5-1. Burt had 17 saves in the win, while Fitzgerald allowed five goals on 38 shots faced.

Next weekend has three games on the slate, as the Minnesota Whitecaps return to the ice and visit the Metropolitan Riveters for a 2-game series. Saturday's game will be a 2:00 PM Eastern puck drop at the Prudential Center; they'll meet again on Sunday for a 3:00 PM Eastern game at Barnabas Health Hockey House.

The Connecticut Whale and Boston Pride will face off at Warrior Ice Arena at 7:30 PM Eastern on Saturday. The Buffalo Beauts are inactive until October 27.