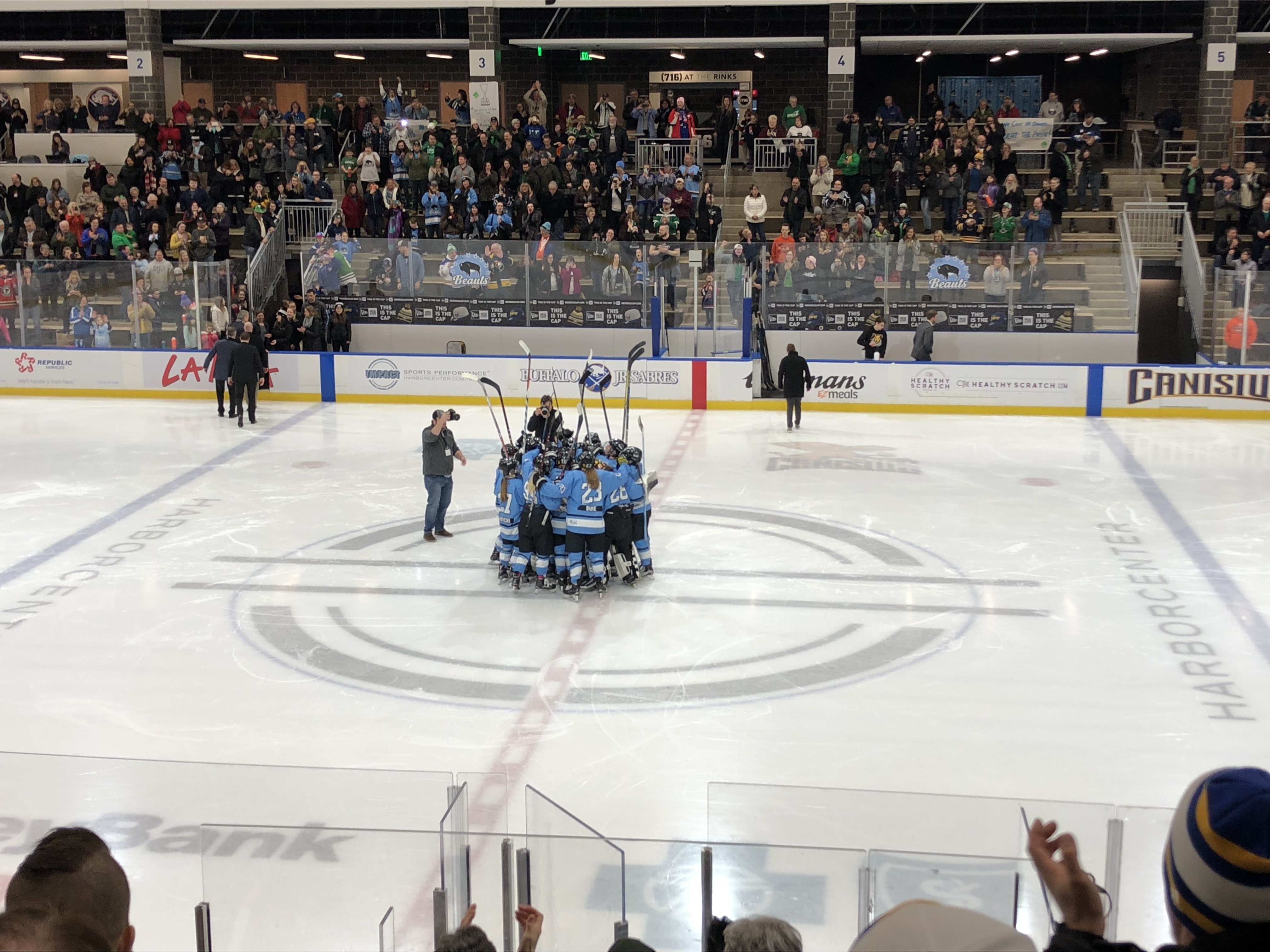 The Buffalo Beauts and the Metropolitan Riveters won their respective NWHL Isobel Cup semifinal games this past weekend and will now vie for the championship on March 25.

The Buffalo Beauts have now made it to the Isobel Cup Final in all three years of the NWHL's existence. They clinched their spot in the Final with a 3-2 overtime victory over the Boston Pride in the semifinal game Saturday.

Sarah Casorso notched her first career NWHL goal -- and what a time to do it. Casorso potted the game-winning goal just 1:21 into the overtime period after firing a shot from just above the top of the faceoff circle. That shot made it through three Pride players and past a pair of Beauts, behind Brittany Ott, and into the net.

Sarah Edney put Buffalo on the board halfway through the first period after a beautiful pass from Kourtney Kunichika. Kunichika's pass from the far side found Edney in front of the net and she slapped it home to make it 1-0.

That lead would last only two minutes before the Pride tied it. Jillian Dempsey snuck it in behind Amanda Leveille on the side of the net to make it a 1-1 game with just over seven minutes to play in the opening period.

Boston broke the tie halfway through the second period on a goal by Mary Parker. After a shot from the top of the faceoff circle, the puck remained in play, and Parker was able to find it and put it in.

The Pride held onto their lead for the rest of the second period. The tide of the game changed when Boston was served a couple penalties early into the third period. With Emily Field in the box for a body-checking minor, Buffalo captain Corinne Buie evened the score on a no-angle shot from the goal line.

"I actually remember Craig [Muni] saying, when you get it on the line, walk it in, shoot it, so that's what I did," Buie said. "I got the puck, I was kind of on the goal line, turned and shot it as fast as I could. I think it went short-side off the post and went in. It couldn't have gone any better."

In a sense, that goal was the turning point of the game.

"After the second period a few of us were frustrated with the calls," Leveille said. "Buie just stepped up in the locker room and she calmed everyone down and led by example on the ice by getting that goal and pumping everyone up."

"Me in the crease just seeing Buie get that goal, I was so ecstatic and in that moment, I just knew we were going to win," Leveille added.

Deadlocked at two after sixty minutes of play, the teams headed to overtime -- and the Beauts found themselves with a power play, as Emily Field went to the box on a tripping call at 19:34 of the third period. It took 1:21 of the OT period, but Casorso eventually took advantage of the power play and gave her team the win.

Casorso said she was "shocked" when she realized her shot went in.

"Overtime's the funnest period you can play in hockey," she said. "It's sudden-death; you have to give it everything you've got."

Leveille and Ott each had 34 saves in the first Isobel Cup semifinal, which saw a near-capacity crowd at HARBORCENTER.

"When you get a crowd like that, and you give them something to cheer about, something to stand in their seat about... people who came in here and bought a ticket tonight, you can't tell me they weren't entertained," said co-head coach Ric Seiling.

"That's all we try to do -- make Buffalo proud of the Beauts," Seiling added.

The Metropolitan Riveters will play for the Isobel Cup for the first time in franchise history following a 5-0 win over the Connecticut Whale in semifinal action Sunday night.

Rebecca Russo put the Riveters on the board just 1:04 into the game.

Sydney Rossman was strong in net with several key saves to maintain the one-goal deficit for Connecticut, which lasted over 30 minutes of game time before Erika Lawler sniped a rebound to make it 2-0 with just over six minutes to play in the second period.

Amanda Boulier nearly got the Whale on the board but her shot hit the post moments later, and her teammate Emily Fluke just missed the rebound. It was a tight game - though the end result doesn't reflect that - until midway through the third period.

That's when the Riveters exploded offensively, powered by a shorthanded tally by Madison Packer that made it 3-0. Packer blocked a shot and went down before scoring the goal. After the Whale tried to cycle the puck, Packer poked it out and then picked up her own shot off the boards to spring herself on a breakaway.

Just minutes later, Bray Ketchum scored the Riveters' fourth goal, chipping the puck in after an initial shot from outside the faceoff circle to Rossman's left.

The Whale then put Keira Goin in net, but just moments after, Kelly Nash made it a 5-0 game on a high shot that went over the goaltender's shoulder.

Katie Fitzgerald had 14 saves in the shutout win.

The Beauts and Riveters will face off for the Isobel Cup on Sunday, March 25 at 3:00 PM at the Barnabas Health Hockey House in Newark, New Jersey. Stay tuned for a full Isobel Cup Final preview later this week.