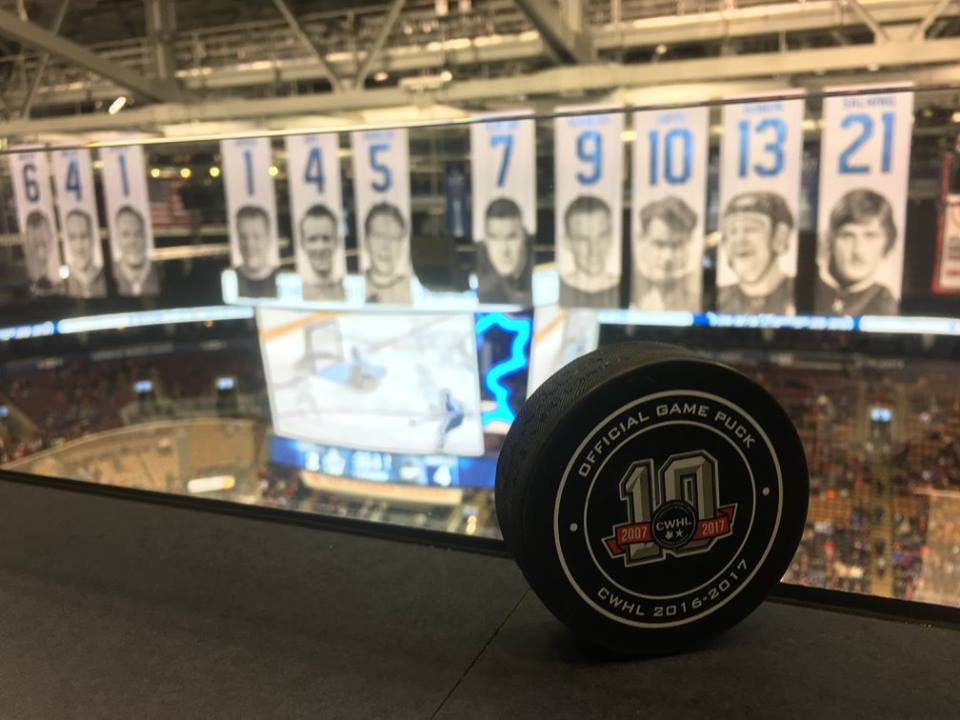 Recently, the CWHL announced its international expansion to China. The league will now feature a Kunlun Red Star team, to begin play this coming season. If you haven't already read Zoe's piece on the news -- check it out for more details.

Following the league's press conference, fans and media alike still have a number of unanswered questions.

One of the big questions surrounds the paying of players. Commissioner Brenda Andress had previously said that the league's goal was to start paying players in the 2017-18 season. In February, she said the league was still "on track" but didn't confirm that payment would begin next season.

At the 2017 All-Star Game, Andress noted that having partnerships and sponsorships both now and in the future will help ensure the success of the league's strategic plan going forward.

At the June 5 press conference to announce the Kunlun team, Andress said plainly that players will not be paid a salary yet.

Just 11 days later, however, Robyn Flynn of Habs Eye on the Prize reported that the league will pay its players next season. Details, however, were scarce, and the source(s) of the report were unclear. A league spokesperson said the pay structure is still being finalised.

The question begs -- what changed? Are CWHL players actually going to be paid next season? (It sounds like it, but there's not yet been anything official from the league.)

And if so, will it be a livable wage? Will it be a salary, different for each player a la the NWHL the past two seasons, or a flat rate? Or will it be some other sort of financial compensation?

Once this is all figured out, the biggest question remaining will be: where is the money coming from? Is it linked to sponsors, to the Chinese businessmen who will be running the Kunlun team, or someone else?

We already know that Kunlun Red Star will be financing the league's other teams' trips to China, and KRS players will be paid as "ambassadors" for Chinese hockey.

Based on reports, Noora Räty will be earning over $60,000 through this program. Per a Tweet from The Ice Garden, some speculation put Kunlun Red Star players earning between $70,000 and $110,000 in American dollars. Those numbers were speculative based on Chelsea Purcell's conversations with her team, per freelance writer Joe Pack, who hosted the Puck Talks panel where this was discussed.

These are undoubtedly significant figures, seemingly unheard of in women's hockey. However, it is unclear exactly whether this money is coming from Kunlun Red Star or from the National Governing Board of hockey in China. A request for clarification on the source of the payroll sent to the CWHL on June 27 has not been answered.

While these two factors have consequences of their own, a connection to the overall paying of players would be significant and require further discussion.

The new team has been created in an effort to "develop a strong base of female players for [Chinese] national programs, and new audiences for the sport in China, in the lead-up to hosting the Beijing Winter Olympics in 2022."

Based on this, it seems like the team will play in the CWHL until at least 2022. It's unclear, however, what will happen after that. It could be a matter of just waiting to see how the team does and how the league's new format works.

The implications of putting a new team in a market not remotely close to any of its current teams will reveal themselves over time. Teams will be traveling to China for blocks of time, playing three games per trip. While the financial side of this is being covered by the folks behind KRS, there are still implications such as travel time and the wear-and-tear of such lengthy travel.

Flights between the CWHL's current cities and Shenzhen, home of Kunlun Red Star, will take between 19 and 24 hours based on time quotes from various airlines. In addition, the block periods for trips to China will mean players may have to take time off from their day jobs. For some players, this may not be a possibility. In both the CWHL and the NWHL, sometimes players miss games because of other obligations. The effect could be much more significant on a China trip.

Another thing to consider: does the expansion to China open the door for more teams, both in Canada and the United States and internationally? Could this pave the way for CWHL teams in cities like Edmonton, New York, or even overseas in Europe or Asia if there's a management team around willing to step up (and possibly foot the bill)?

While the commissioner's press conference upon the announcement of the new team revealed some answers, it seems as though we've been left with more and more questions. Some details will undoubtedly be revealed before the season begins, but other long-term implications will take months, even years, to be determined.