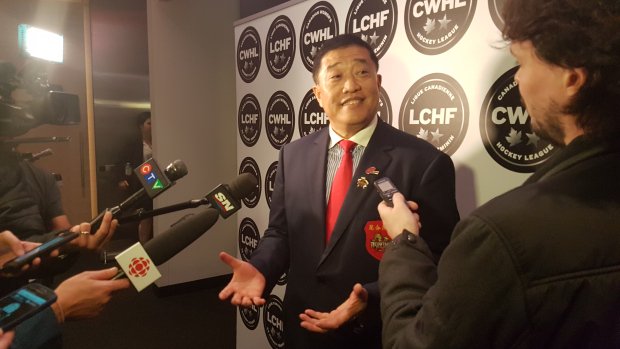 For several weeks prior to Monday's official announcement about the CWHL's addition of an expansion team in Shenzhen, China, the news was being leaked in the international press -- namely on Chinese sports websites and in the Finnish news, as first reported by The Ice Garden.

The CWHL kept mum on the subject until Monday, when, at a media event in Toronto, they finally spilled details to the English-language hockey world. While the reception among women's hockey fans and reporters has been mixed, it's unlikely that anyone wouldn't call this an interesting move.

Who will play for KRS?

While the CWHL clarified that terms have not been finalized with Noora Räty and Kelli Stack and that they are "free agents", both were present at the official KRS announcement wearing Red Star jerseys and seem likely to join the club.

This marks Räty's return to women's professional hockey, after she's played for several teams in the Finnish men's pro league Suomi-sarja for the last few years. Stack leaves the Connecticut Whale of the NWHL to join KRS after being left off of Team USA's Olympic roster for Pyeongchang. Stack played sporadically for the Boston Blades of the CWHL between 2011 and 2015 -- her last full season in the CWHL was the 2011-12 season, when she played 27 total games.

Räty is widely considered to be one of the toughest goalies to play against on the international stage, where her average save percentage over every tournament since 2014, including in the Olympics, is 0.928, when she'd faced many of the best players in the world. Stack is a forward who has averaged more than a point per game in every league that she has ever played in, including 4G and 9A in 10 games at the last Olympics. Both are huge adds for Kunlun Red Star if they do get on board -- these aren't second-tier players, but international superstars.

All indications are that KRS will also include Chinese national team players on their roster. Those players will presumably enter the CWHL draft, and, per CWHL practice, will list Shenzhen as their preferred playing location.

About the Kunlun Red Star and the KHL...

The Kontinental Hockey League (KHL) added its own Chinese expansion team last year, too, which will be the partner franchise of the CWHL's KRS. Kunlun Red Star skated to a 28-29-3 record in their inaugural season and placed fifth in their division. Still, they made it to the playoffs and lost 4-1 to Metallurg Magnitogorsk in the conference quarterfinals of the Gagarin Cup. The KHL's Kunlun Red Star played in Beijing in the 2016-17 season. Their roster is primarily made up of Russians, Europeans, and Canadians, with only a couple players who have direct ties to China.

They had to play some of their home games in Shanghai in the first season due to the LeSports Center in Beijing not being available, which hurt their attendance numbers. They drew an average crowd of about 5,000 during their home games in Beijing and, according to the IIHF, are the most-watched club team in Asia.

For this season, they've added Mike Keenan as coach. Keenan is a longtime NHL coach who most recently coached the KHL's Magnitogorsk, after leaving as coach of the Calgary Flames in 2009. He replaces the team's first coach, Vladimir Yurzinov. Meanwhile, former NCAA coach Scotty MacPherson is VP and international development director for Kunlun Red Star.

The KHL's expansion is of particular interest to the Russian state, and Russian PM Vladimir Putin is a huge supporter of the KHL becoming a global league. When the Russian Superleague was rebranded in 2008 as the KHL, it became a huge conduit for cash, and cash has been an incentive for players, who can make salaries comparable to NHL salaries, plus bonuses -- and with no taxes deducted from their income. NHL-caliber players who leave for the KHL, or who never come to the NHL in the first place, have noted both the financial benefit, as well as what is considered to be a less physical style of play on a bigger ice surface, which often allows older players or players who have dealt with injuries to play a little longer in the KHL and make some extra money.

That money often comes from the corporations (many state-owned) that invest in the KHL teams, and the cash flow from banks to teams to players is said to be both complex and suspect. (For further reading, see this 2012 story by Rick Westhead and this 2013 exerpt from This Is Russia.) Because of how much Russian government money has gone into keeping the KHL up and running, it has been suggested that the KHL reduce its number of teams, and the Russian finance minister Anton Siluanov criticized the government's spending on sports teams as irresponsible last year, per RT Sport.

It's still murky as to where the money actually comes from, though energy companies seem to be the norm. From Foreign Policy last April:

The Russian Superleague saw some private financing, but the 28 team-strong KHL is a financial powerhouse: Although the finances of individual teams are opaque, the league as a whole has sponsorships from some of the largest companies in Russia, including Russian energy giant Gazprom. According to sponsorship consultancy SE Sponsorship, the league’s other sponsors include oil and gas exploration company Eriell and gas supplier OJSC Severneftegazprom, which is owned by Gazprom, as well as Germany’s Wintershall and E.ON. Gazprom also has two billion-ruble sponsorship deals (worth $57 million when they were signed in 2014; $24 million today) with the Siberian team Avangard and St. Petersburg’s SKA team.

The KHL's expansion has been aggressive. They managed to fold in Jokerit Helsinki, who left the Finnish Liiga and joined the KHL in 2014 to become the first Nordic team in the league. They added a team in Bratislava in 2012, and additional Russian teams in Vladivostok, Sochi, and Tolyatti in 2013 and 2014. Kunlun Red Star's addition in 2016 brought the total number of KHL teams to 27 for the 2016-17 season.

Most notably, after the move to the KHL, Jokerit's new owners were put on a sanctions list by the US Treasury Department "due to their actions on behalf of the Russian government" (also per Foreign Policy).

Russia's investment in international hockey, as detailed in the same article, often has PR implications for the state itself -- in short, the Kremlin's interest in ice hockey and its expansion may not necessarily be good business, but it's "good" business to be investing heavily (on paper) in something that brings people joy, like sports.

China's interest in growing the game of ice hockey is largely informed by its 2022 Beijing Winter Olympics. This is China's first time hosting the winter Games, and they have been investing heavily in their ice hockey development, hoping to capture some medals sooner rather than later and be a real contender in time for 2022. The KHL's Kunlun Red Star was one step in that process. Women's hockey, which has a smaller field of true medal contenders, may be an even better shot for China to capture an Olympic ice hockey medal that year. In light of this, and in light of positive ties between Russia and China, plus Russia's historically strong hockey culture, adding a KHL expansion team in Beijing probably seemed like a no-brainer for both parties.

The CWHL's Kunlun Red Star will be funded by two named investors, Xiaoyu Zhao and Billy Ngok. Zhao has worked at the World Bank and spent 22 years with the Ministry of Finance in China. He is currently Vice President of the China Development Bank. Ngok has founded multiple companies, including China Environmental Energy Holdings, Ltd. and Golden Brick Capital Management Limited.

The case is the same with the CWHL's KRS, according to The Globe and Mail:

The plan has come together in just a few months. KRS, who last year debuted a men’s expansion team of the same name in Russia’s Kontinental Hockey League (KHL), approached the CWHL about launching a women’s team. The Red Star will play a 30-game schedule against the league’s other teams from Toronto, Brampton, Calgary, Montreal and Boston.

This is a huge break from the ways in which CWHL clubs have come together in the past, which have no owners and are operated by the CWHL itself. Kunlun Red Star is being directly operated and financed by its KHL counterpart, rather than by the CWHL; however, CWHL commissioner Brenda Andress stated that it would operate using the same rules and guidelines. KRS will also be financing the travel of the five North American CWHL teams to play their away games in Shenzhen, per The Globe and Mail. Kunlun Red Star will come for two-week trips to North America, playing multiple road games on each trip. Each North American CWHL team will play three games on the road in China per trip.

The CWHL has historically been a player-based initiative, and when it formed in 2007 it was on the heels of the old NWHL, a league that suffered because of the whims of its male owners -- all businessmen who also poured money into teams that were financially unsustainable.

It would be hard to overstate how starkly this differs from how CWHL teams were formed in the past. The operators of these teams have traditionally been longtime women's hockey figures. Allowing two wealthy businessmen who are already invested in the KHL expansion to pull the strings on this team is nothing less than radical in CWHL terms.

Welcome to my world CWHL fans. Kunlun is a KHL project, and it's gonna screw fans, the CWHL and other teams.

Not against growing the game but pay was suppose to be for the women in 17/18 season... confused

Everyone who loves hockey is excited about the prospect of great coaches, managers, and players helping to "grow the game" of ice hockey in China. However, the CWHL had said they were aiming to pay players in the 2017-18 season -- and Andress plainly stated that they would not be doing so. Instead, they are adding an expansion team, and by all accounts, doing so quite suddenly. The CWHL is moving to a new and exciting market, but its players will still find themselves without a paycheck of any kind, plus a much harder and more complicated road schedule.

In addition, hockey reporters globally seem to react to the KHL with suspicion, but the suspicions are especially strong in those who report directly on the KHL.

It's important to note, of course, that the NHL is also known for dumping money into risky projects and for courting businessmen to own its franchises who have less-than-sound plans or intentions. This is a pro sports problem, not an exclusively KHL problem.

However -- and especially without a formal Players' Association -- it seems like the CWHL is leaving its players vulnerable. Safety, travel, and financial support are all big question marks, both for the players who sign with Kunlun Red Star and those who will be traveling to Shenzhen to play.