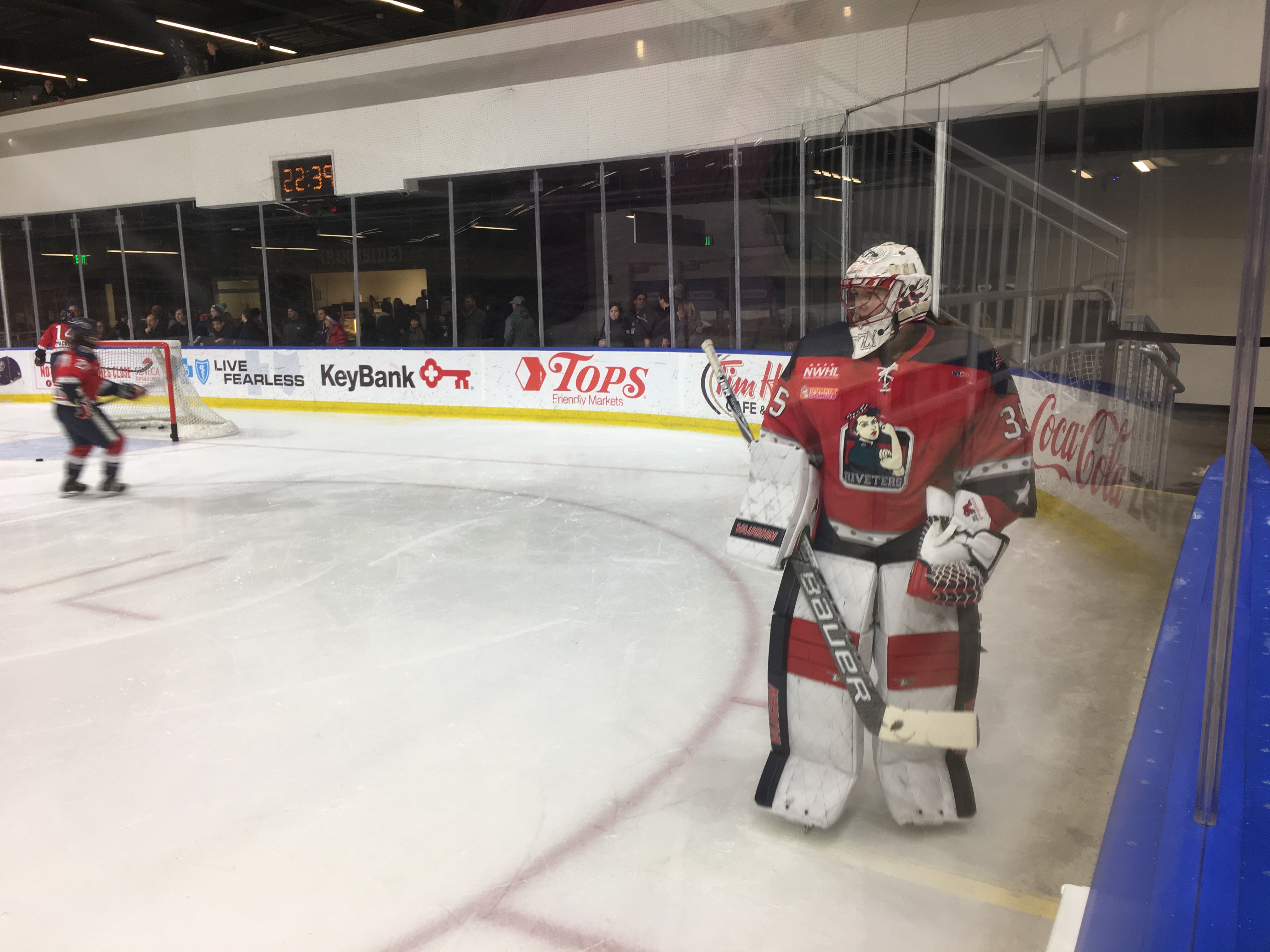 The Buffalo Beauts’ lackluster effort wasn’t enough to put even one goal past the brick wall that has been New York Riveters netminder Katie Fitzgerald on January 14, as the Riveters notched a 3-0 win to take second place in the NWHL.

Harrison Browne said post-game that the Beauts had a slow start; his teammate Shiann Darkangelo said that the team came out flat. Either way, New York put up great pressure in the opening minutes of the game, which left Buffalo with little room to get any chances early-on. It paid off quickly, as the Riveters struck first just 3:24 into the game.

Michelle Picard opened the scoring with her first goal of the season to give her team an early 1-0 lead. Miye D’Oench and Janine Weber notched the assists.

This time, it was Janine Weber who put one behind Beauts netminder Brianne McLaughlin. The Beauts found themselves down a defender in front of the net, with Paige Harrington in the corner retrieving a lost glove while play continued. Weber was able to get around the Beauts and make it a 2-0 game.

Lauren Wash, making her NWHL debut after signing with New York earlier in the week, contributed an assist on Weber’s goal, and Kaleigh Fratkin also had an assist.

The Beauts then had several power-play opportunities in the second half of the first period, all of which were fruitless. First, D’Oench went off for a slashing minor, which the Riveters successfully killed.

Next, Kiira Dosdall and Ashley Johnston were each served penalties within less than a minute of each other late in the period to give Buffalo a 5-on-3 chance.

But as would be the story for the rest of the game, the Beauts were unable to capitalize.

The Riveters struck again, going up 3-0 just 7:21 into the middle frame on a goal by Dosdall. With an assist, Rebecca Russo now leads the league in helpers this season (with 9).

The Beauts struggled in the second period, putting up just one shot on goal in the first nine minutes.

They went on the power play again as Milica McMillen was called for body-checking, but the Beauts were once again unable to capitalize.

The troubles kept coming, as Kelley Steadman, arguably one of Buffalo’s top offensive threats, was tossed a 10-minute misconduct for abuse of officials with under five to play in the second.

Buffalo would get one more power-play opportunity late in the third period, just as their offensive strides were hitting the mark -- but it was too little, too late. Even pulling the goaltender for an extra skater wasn’t quite enough for them to solve Fitzgerald.

"The desperation we played with at the end, we need to start that from the beginning," said Beauts defender Harrison Browne after the game.

"We're hungry. We didn't play our game...we didn't give them a competition at all," Browne said.

"We need to play our game. Once we do, I'm very confident that we'll come out with a better result," Browne said.

Katie Fitzgerald's shutout was the second straight for the Riveters, after Sojung Shin's shutout on December 18. New York hasn't allowed a goal in 123:08.

A few things can be taken away from the Beauts’ loss on Saturday. First, their power play, which was great when entering the game, struggled to get any momentum and was ultimately unsuccessful. In addition, the Beauts have proven to be inconsistent this season. Last week, it was an offensive charge in the 6-5 win over the Whale; this week, they couldn’t get anything going.

"There's a lot of things going on the league...obviously some girls have to have other jobs and do other things," Darkangelo said. "People are in and out, and it does make it tougher. But obviously when you show up at the rink, you show up ready to play and put your best game out there."

A few roster notes from Saturday’s game: Amanda Kessel remained absent from the Riveters lineup. She’s still played just one NWHL regular-season game -- New York’s first -- although she did play in the USA/CAN December Series. Her status at this point is unknown.

For Buffalo, forward Kristina Lavoie and defenders Lisa Chesson and Anne Schleper were all absent.

Darkangelo called Saturday's loss "one little bump in the road" for the Beauts, who now have a week off, returning to action for a Friday night rematch against the Riveters on January 27. The Riveters, meanwhile, host the Boston Pride on Saturday, January 21 for a 6 PM faceoff.