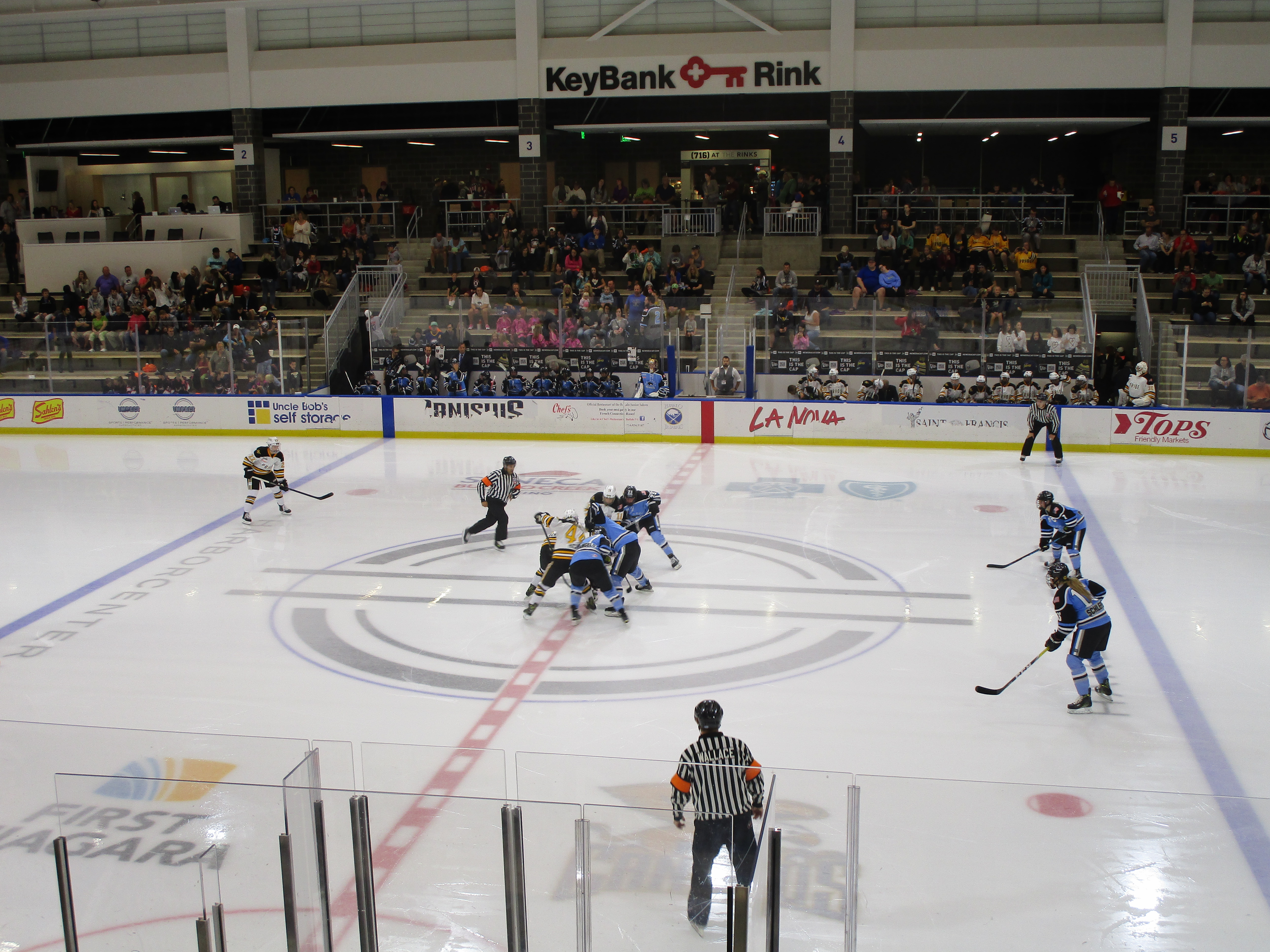 The National Women's Hockey League adopted the slogan "History Continues" for its second season. That slogan certainly seemed fitting as the league opened the season this past weekend with a slew of events, including three games, at HARBORCENTER in downtown Buffalo, NY.

In addition to kicking off the NWHL's regular season, opening weekend also featured the first-ever NWHL Futures Tournament. A "Girls Try Hockey For Free" event was also held prior to the opening game, outfitting girls of all ages with skates and other equipment and letting them get a taste of what being a hockey player is all about.

The league's second season opened where it left off at the end of the first: with the Boston Pride, now Isobel Cup Champions, facing off against the Buffalo Beauts. Both teams opened their season a little short, with the Pride missing Hilary Knight, and Kelley Steadman out of the lineup for the Beauts.

Off the bat, it appeared to be a pretty even game; it was scoreless after twenty, and both teams seemed to be battling hard. A four-goal second period, however, would give the Pride that extra edge and show them off as a dominating team once again.

Rookie Alex Carpenter opened the scoring, notching her first NWHL goal to put the Pride up 1-0. Less than five minutes later, Jillian Dempsey upped the lead to two, with Carpenter notching an assist. Several more minutes passed, and the domination continued, as Rachel Llanes put Boston up by three. Finally, Amanda Pelkey topped it off with her first of the year to give the Pride a decisive 4-0 lead at the end of the middle frame.

Though the Beauts were often known as the "Comeback Kids" last season -- and they'd certainly show as much in the second game of the season -- they couldn't pull it off on Friday night, notching just one goal in the third period.

That goal, however, was not only beautiful -- coming shorthanded and on a breakaway -- it was historic.

Harrison Browne, who earlier that day became the first publicly out transgender athlete in a professional league in the United States, scored the Beauts' first goal of the season. A thunderous applause followed the shorthanded tally, with the Beauts' PA announcer's voice booming out: "His first of the season, scored by number 24, Harrison Browne!"

Hearing his name announced in the arena was "unreal," according to Browne.

"I’ve never felt something like that before," he said after the game.

NWHL commissioner Dani Rylan said post-game that the league is working on a policy to include transgender athletes, both men and women, in the future. She also noted the opportunity the league now has on its hands.

“It’s pretty special, even as small a league as we are, that we’re able to take sports, the players, even the media, and allow us to talk about these social issues and allow other people to feel more comfortable coming out and being their true self,” Rylan said.

“Sports can be pretty special. Fans usually care about the scores; who scores the goals, the highlights, whatever it might be,” she said. “Then we take a step back and realize what sports really can mean for society.”

Although Friday night's game ended with a 4-1 loss for the Beauts, there were some positives to be taken away. Special teams had a solid night, as Boston was held off the scoresheet in five power-play opportunities; Browne's goal also came shorthanded.

"We struggled with our five-on-five," said co-head coach Ric Seiling. "It's about getting to know one another. That’s the learning process when you’ve got new people together and you’ve only been together for less than a month."

Indeed, the Beauts team that hit the ice on Friday was quite different from the one that skated off the ice at the Isobel Cup Final in March. Of the 17 skaters in the opening game, ten were new to the Buffalo organization, including several new to the NWHL overall.

Chemistry needs to be built between the new teammates, and many players need to adapt quickly to the professional game.

“We have a lot of new girls on this team so it’s a short learning curve for them,” said Beauts co-head coach Craig Muni as the weekend wrapped up.

The action continued on Saturday night, with the New York Riveters opening their season against the Pride, who faced their second game in less than 24 hours.

While Knight was once again absent for Boston, one notable player suiting up for her first NWHL game was Riveters forward Amanda Kessel. Kessel was already awarded with an "A" on her jersey in just her first professional game.

“She hasn’t disappointed since day one. Her ability, you can’t miss it out there. She brings that work ethic everyday to practice and that commitment and players look up to her. It pushes the pace of practice & makes our team better," Riveters head coach and GM Chad Wiseman said.

For the opening twenty minutes, the parity in the league was well-represented, with the seemingly-improved Riveters keeping pace with the dominating Pride. Alex Carpenter opened the scoring with her second of the season, but Miye D'Oench tied the game for New York just over a minute later.

However, the second period is where, once again, the Pride showed their domination and, for the second consecutive game, put up four goals in single frame -- this time in just 9:18. Brianna Decker potted two, with Blake Bolden and Rachel Llanes also adding goals, to put Boston up 5-1.

Riveters defender Milica McMillen added a power-play goal later in the second for her first NWHL goal, and New York opted to switch goalies for the third period, with Katie Fitzgerald coming in to relieve Sojung Shin, who allowed five goals on 26 shots.

"I didn’t even know I scored. It was pretty awesome, especially getting a puck from Kessel… I’m just so used to that." - McMillen, who played with Kessel as a member of the Minnesota Golden Gophers.

Despite the goalie change, it wouldn’t be enough for New York to rally back. Tatiana Rafter closed the gap in the third period, but Emily Field notched a shorthanded tally late in the third to seal the 6-3 Pride victory.

All in all, it seemed to be a much closer game than Pride/Riveters games last season, and certainly bodes well for an interesting season ahead.

“We just can’t afford to have any mental lapses and we had about four minutes in the second period and that was the difference in the game,” Wiseman said.

The NWHL finished its opening weekend with a rivalry rematch between the Buffalo Beauts and the Connecticut Whale.

In a closely-matched game where Buffalo's "comeback kids" roared, the Beauts captured their first-ever regular season victory over the Whale; they lost all six regular-season meetings with Connecticut last season.

Despite a hat trick by Whale rookie Haley Skarupa, the Beauts were able to rally back from a 4-2 deficit in the third period with a trio of goals to tie and win the game.

Goals came early and late in Sunday's interesting tilt. Skarupa got the Whale on the board less than two minutes in, with Megan Bozek tying the game with under a minute to play in the first. The second period started the same way, with Connecticut's Kelly Babstock potting her first of the season to put the Whale up 2-1.

Skarupa added her second of the night later in the period, with Beauts rookie Emily Janiga potting her first NWHL goal with under two to play in the middle frame. Skarupa completed the hat trick with 17 seconds to play in the second, and Connecticut skated off with a 4-2 lead.

That's when things really got interesting.

The Beauts swapped goalies, pulling Amanda Leveille in favor of Brianne McLaughlin. It was a flip of what happened in Friday's game, which saw McLaughlin start and Leveille finish things off. Sunday, Leveille allowed four goals on 27 shots and gave the Whale several huge rebounds, at least one of which resulted in a goal.

And then the comeback kids came back.

Kelley Steadman, playing in her first game of the season scored her first of the night to bring the Beauts within one, after having missed Friday's game due to commitments with Robert Morris University.

Less than a minute later -- and still less than two minutes into the period -- Kourtney Kunichika added a power-play tally to tie the game at four.

Steadman brought her magic to the game, as she added her second of the night on a beautiful shot from an impossible angle, and put the Beauts ahead 5-4 with under nine to play in regulation.

Despite some late penalties, including a 5-on-3 opportunity for the Whale, the Beauts held on for their first win of the season.

That’s already an improvement over last year, when it took Buffalo six games to notch their first victory. This year, it took only two games; the Beauts earned a 1-1 record on the weekend.

Overall, opening weekend was largely representative of the improved parity league-wide. While Boston and Connecticut were easily the one-two punch for much of last year, all four teams looked equally competitive and talented. This wasn’t lost on anyone, including Steadman and Rylan.

“This year, I think it’s anybody’s game to win, any night,” Steadman said. “There’s a good spread of talent across the board.”

“The level of play on the ice has improved dramatically from our first season,” Rylan noted. “We’re excited about that.”

"We are definitely still a startup in many ways, we definitely have a lot to improve on every day," Rylan added.

While a lot of things went right for the league in its opening weekend, there were some minor snafus. Tatiana Rafter was made to wear a jersey with a masking-tape #7 on the back –- and no nameplate –- after the logo on the front of her actual jersey began peeling off.

In addition, several Beauts could be seen sporting upside-down flags on their jerseys in warm-ups, including Megan Bozek and Kelley Steadman. This was a production error from the manufacturer.

All things considered, the league kicked off its second season on the right note, while still having some things to improve upon.

NWHL play resumes this weekend, with Boston and Buffalo facing off Saturday night at Warrior Ice Arena in Boston, and the Whale and Riveters battling Sunday at Barnabas Health Hockey House in Newark, New Jersey.