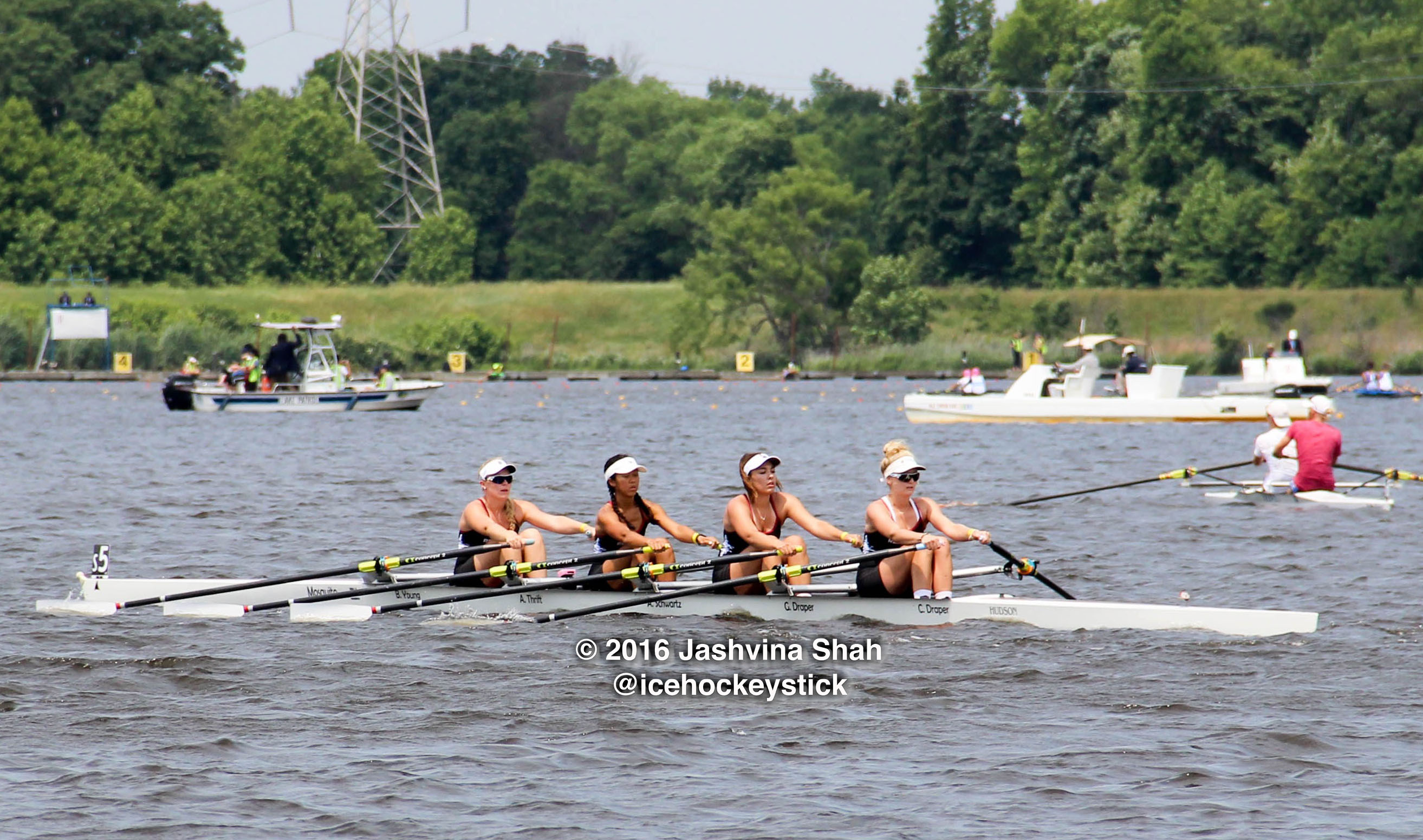 Catherine Mahoney, India Krappe, and Olivia Leupold sat quietly on a bench outside the Mercer County Park Marina in West Windsor, New Jersey. It was barely seven o'clock, but the sun had already been up for hours, sprinkling yellow into the calm lake waters. The rowers focused on the stream of boats that were entering the launch dock, each one cautiously plopped into the lake.

The trio, all members of Redwood Scullers/Stanford Rowing Center, was less than an hour away from preparing their own boat for the US Rowing Youth National Championships. The three girls are part of a quad (along with a fourth rower, Isabella Duan). They were scheduled to race in the Women's Youth 4x semifinal that morning.

Youth level rowing is for high-school-aged athletes (under-19 competitors who have not yet graduated), and the event that the girls would be participating in is also referred to as a quadruple scull. The quad scull crew consists of four rowers, each with a pair of oars, who row in unison using oars on both sides. (This differs it from what you'd call a "four" in rowing, where four rowers have one oar apiece, and row on alternating sides of their boat.)

"[It's] also pretty incredible though, we were coming into this sort of thinking that we were the underdogs and we posted the second fastest time yesterday," Leupold said. "That's a pretty great feeling to know we weren't there a month ago at Regionals and the work we've put in, [the] girls together, we were at practice like seven, eight times a week working really, really hard to be able to do it."

The weather shifted the schedule, posing more challenges for the crew from California. Thursday’s races were canceled and Sunday’s finals were moved to Saturday.

The quad, which won bronze in its regional to advance to the Youth National Championships, have participated in several different races. While they've raced in some races independently and some together, they've rowed at the Head of the Schuylkill and Head of the Oklahoma. Mahoney even raced in the Head of the Charles.

"Northern California's not so much competitive for sculling because we scull," Krappe said. "But southern California, whenever we race them, they give us a run for our money."

Both Mahoney and Krappe have family ties to the sport. Mahoney's older brother is a member of the junior national team, leaving rowing as an option after Mahoney suffered a volleyball injury. Krappe's older brother also rowed and her father was a member of the British national team. Krappe has now been rowing for five years and will row at Loyola Marymount University, while Mahoney has been looked at by Ivies.

"The only way you can really get faster is just by putting meters and hours in, and that's just really time-consuming," Krappe said.

Leuopold said Division I rowing was an option, but it's one that she won't pursue. She began rowing halfway through her sophomore year. High school transfer complications prevented her from playing soccer, so she joined a novice team -- a team comprised of anyone with less than a year of rowing experience.

"It's really hard that while rowing is a team sport, I'm in a quad with these girls that are super supportive, but you have to be fighting really individually [and] put the meters in on your own because you're also fighting other girls that want to get in the boat," Leupold said. "You really have to be competitive, like your own competitive spirit, but you do have a support system, so it's kind of complicated with that. It can be kind of challenging to balance it sometimes."

Rowing, especially in California, is competitive. But the rowers encounter those who don't follow the sport much.

"I go to a theater high school and whenever I say I do crew, they think I mean stage crew, so they think I'm involved with the theater," Mahoney said. "They're like, 'Oh that's so cool, what play have you been working on?' And I'm like no, no, no, no."

Outside of the early morning practices -- they wake up at 5 AM every day -- rowing requires training off the boat. Redwood's quad lift weights, run, swim, and work with the erg (or rowing) machine.

As with most sports, the result comes as much from discipline and solid form as it does from strength and ability. Mahoney, Leupold, and Krappe have been asked if rowing is like the dragon boat, chainring, or kayaking.

"They're like, isn't that just a sport for unathletic kids," Leupold said. "The worst is, 'Oh my God, you must have like a huge upper body, your arms must be so strong.'" But, being an elite athlete takes all kinds -- the rowers at Youth Nationals are both accomplished athletes and normal teenagers.

In the semifinal on Saturday, June 11, the quad from Redwood Scullers finished third -- which was high enough to advance to Final Group A, where they finished fifth.

For more information about the 2016 US Rowing Youth National Championships, see the official heat sheets and full results.