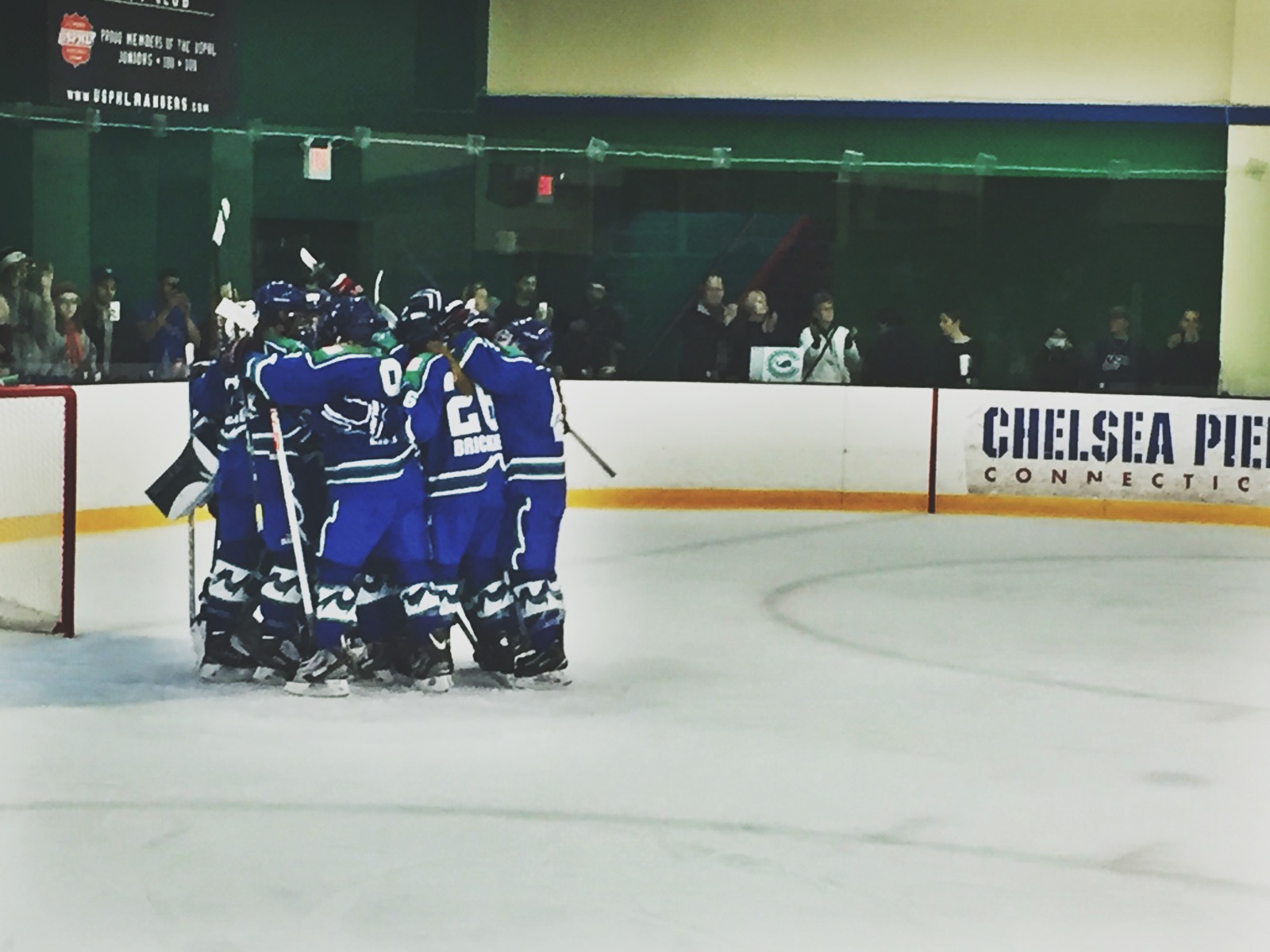 Connecticut Whale head coach Jake Mastel entered the locker room after Sunday's inaugural NWHL game to give Jessica Koizumi a historic puck: the one she buried behind the New York Riveters' Nana Fujimoto for her first goal of the season. It was also the first regular season goal in NWHL history. Amid the great spectacle of innumerable young girls in hockey jerseys excited to meet their heroes, and the roar of the tightly packed crowd at Chelsea Piers, it might be easy to eclipse the actual gameplay with the singularly importance and excitement of this game. But the talent on the ice, and the beginnings of what could be a real rivalry, easily justified the intensity and anticipation that led up to the first puck drop in the National Women's Hockey League.

The Whale struck first, of course, with Koizumi's goal, which came off of a scramble in front of the New York goal. Kelly Babstock got the puck from the boards to the crease, and Stack passed it to Koizumi quickly enough that Fujimoto lost her net. It was a perfect, quick shot from the veteran Koizumi, and it put the Whale up 1-0.

The Riveters played a physical game, and had their chances early to keep pace with Connecticut, including a 4-on-3 power play. Goaltender Jaimie Leonoff was excellent, however, whether with traffic in front or a crafty shooter coming down the wing. Her finest saves of the first period were on Lyudmila Belyakova's nifty backhander on a breakaway, and late when she stopped multiple shots from Beth Hanrahan.

The Riveters tied the game early in the second on a rocket from Brooke Ammerman, giving the sizable contingent of NY fans who made the trip to Stamford something to cheer about. The Whale came right back, though, as Kaleigh Fratkin got it deep to Kelli Stack, who was able to find a seam over Fujimoto's left pad. The Whale almost made it 3-1 just a few minutes later, but goaltender interference caused the apparent goal by Lindsay Berman to be waved off. Late in the second, Janine Weber and Morgan Fritz-Ward had a golden chance to tie it up with a mini 2-on-1 in front of Leonoff, but it wouldn't go.

Chances of a Riveters comeback were dashed in the third, when a tricky shot from the boards by Kelly Babstock found its way through Fujimoto's five-hole. The Whale got a fourth from Shiann Darkangelo as extra insurance. Their speed, puck control, and a standout performance from Leonoff made the difference.

The Riveters played a physical game and have several bona fide scoring threats (Weber, Belyakova, Hanrahan). However, having only four defenders on their roster presents certain challenges over the course of a 60-minute hockey game. They will need to come out with stronger starts so they can capitalize on early chances.

Stack, on her goal:

I was just kinda wide open on the back door there and I saw the whole net, all I had to do was kind of redirect it over the goalie's leg. It was a big goal for us.

On the physicality of the NWHL and the Connecticut-New York rivalry:

She is amazing. Leo is Leo. My daughter's a junior at Harvard and has played against her for years. And Leo gives everybody fits. And she was huge. She was money today.

The cohesion on that line has come full circle in a short amount of time. Kelly Babstock is a true center, but this young lady was willing to move to the wing. That line, when I put them on the ice I just sit back and enjoy the show. They're just a joy to watch.

On their third period performance against the play of the Riveters:

They're a very physical team. Our team took it in stride and at the end of the day, we weathered the physicalness, we weathered that storm. Eventually, you get sick and tired of chasing that rabbit around. That third period, we went back to hard work.

Nothing really behind it. It was a long journey for a lot of us to get here. So, I'm sure a lot of people along the way heard that we really couldn't do anything like this. We wouldn't play college hockey, we wouldn't get scholarships to play in college, so to be here now -- not just for me, but for my teammates -- is a pretty special thing.

On her particular style of play and the NWHL's take on contact:

They're gonna let us play, obviously. I lost my temper a little bit in the corner. But, I learned last week that fighting is only a five-minute penalty and not a three-game misconduct -- so, I don't like when people take liberties, I don't like when people take shots at my teammates, that's part of my game. We're all physical, we all step it up a little bit. I mean, they let us play. It's "no contact" but -- we're feisty, we like to be aggressive. It's part of the game.

The Riveters will return to action against the Boston Pride next week in their home opener, while the Whale will face the Beauts in Buffalo.