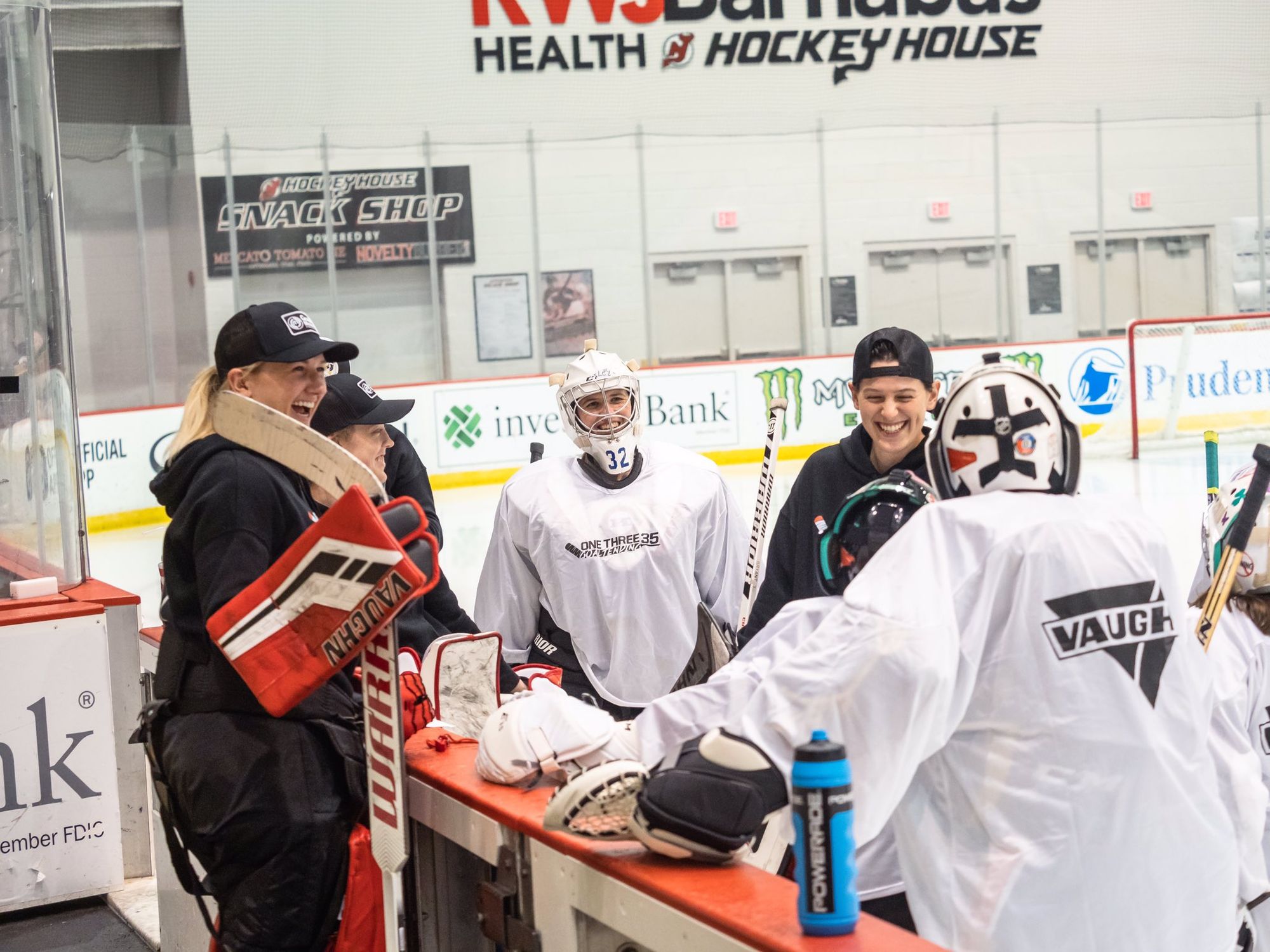 Professional women's hockey goaltender Kimberly Sass thrives at the intersection of STEM and sport. An architect at HLW in Manhattan, Sass is also a member of the Tri-State Region of the PWHPA and an ambassador for STEM education with various organizations around the country.

As if that wasn't enough to occupy her time, the 29-year-old also serves as a coach with OneThree35 Goaltending and runs an art shop on Etsy, all while preparing an art show about women's hockey that she hopes to showcase sometime in the future.

Somehow, she makes it all work.

Sass studied art and geography as an undergraduate at Colgate University. She became captivated by a studio architecture class, which ultimately motivated her to pursue a master's degree in architecture at the University at Buffalo.

"My professor showed me that you can still be creative, in a slightly more technical way," Sass said. "I was really interested in combining art and architecture, using my background in undergrad and pushing the boundaries between art and architecture."

As she finished her thesis, her professional hockey career began with the NWHL's Buffalo Beauts. "That was the beginning of having two careers, I guess," she said. "But even before that, I was always multitasking, like while I was a student-athlete."

Having two careers (or in Sass' case, more like three or four) is a huge part of day-to-day life for professional women's hockey players. Balancing those careers isn't always easy – and, of course, the ideal according to the PWHPA, of which she is a member, would be for players to pursue hockey as a full-time job.

That wasn't an option back in the early days of the NWHL, and remains out of the question today, as the NWHL doesn't offer a living wage, and PWHPA players are not paid for their efforts. So, Sass said, she did both: she worked full-time, skated with the Beauts, and pursued her master's. Nothing like staying busy.

The necessity to hold a full-time job alongside her playing career eventually brought her to New York City, where she'd previously done an internship. After the first NWHL season, she decided to check out her options.

"I contacted the Beauts and the Riveters," she said. "Because of course, you had to have a full-time job while playing, so I looked at the two locations where I would consider having a full-time job in architecture."

"But both teams had their roster positions set," she said. "They only had a practice position, but I wasn't willing to do that alongside my career, so I decided to take a year off, or 'retire' as I guess I would've considered it then."

The Riveters, however, eventually came calling.

"I got messages in the fall, right before season three [of the NWHL], asking if I would come play for the Riveters. A second-string position had opened up, so I immediately jumped on the opportunity to move back to New York City," she said.

Near the end of her second season with the Riveters, Sass moved to a different architecture firm, HLW, which focuses on interior workplace design.

"I really like what I'm doing," she said. "I'm working on a four-floor renovation project for a financial services company in Jersey City, overlooking the Hudson River. It should be done with construction in April, and I'm really looking forward to that."

While Sass' passion for hockey is clear, her love of architecture is, too.

"The best part is, after you've spent so much time going over all the details of the design with the client and the engineers, and you get to walk on the site throughout the process of when they're building it," she said. "The best part is honestly the photo shoot at the end, seeing the finished space."

At the intersection of being an architect and a professional hockey player, Sass became involved in the world of STEM (Science, Technology, Engineering & Math) education through organizations like IF/THEN, which "seeks to further advance women in science, technology, engineering and math by empowering current innovators and inspiring the next generation of pioneers."

According to their website, the organization "is designed to activate a culture shift among young girls to open their eyes to STEM careers by 1) funding and elevating women in STEM as role models, 2) convening cross-sector partners in entertainment, fashion, sports, business and academia to illuminate the importance of STEM everywhere, and 3) inspiring girls with better portrayals of women in STEM through media and learning experiences to pique their interest in STEM careers."

As part of her involvement with IF/THEN, Sass filmed a television segment in her office at the architecture firm for a campaign called #STEMmeetsSports. She was also selected for the Mission Unstoppable TV show, hosted by actress Miranda Cosgrove, which highlights female innovators on the cutting edge of science.

"Then, I had to formally apply to be an ambassador [for If/Then]," she said. "I was selected as one of 125 female ambassadors; we all have different STEM careers and come from different backgrounds and different races."

She also recently traveled to Seattle for the AAAS annual meeting, where she attended seminars, listened to speakers in the field and hosted a booth as part of a "family science day" designed to encourage kids to get involved in STEM.

"I got to teach kids architecture through making toothpick and marshmallow houses," she said. "It was pretty cool. It was interesting to see some kids build it right off the drawings, and I walked them through it. But then some kids decided to just pick up the sticks and go for it, and they added garages or made it four stories tall."

Sass said as a young person, she never felt limited or confined to only do certain things due to her gender; now, she wants to make sure no one else faces those barriers.

"I just want to make sure that no matter what upbringing you have, that you have someone out there telling or showing you that if you can see, you can be it," she said.

Sass is doing just that as a member of the Tri-State region of the PWHPA as well, it seems. She's also a board member and a player representative for her region. That means regularly communicating with a core group of players, whether through messages or phone calls; working with coaches and equipment managers; coordinating resources with the NHL's New Jersey Devils, and generally keeping players informed.

She's also a representative for the many non-national team players in the PWHPA, a role that she embraces.

"I think there are definitely people in [the PWHPA] that aren't National Team members that are overly-qualified to be considered a professional hockey player," she said. "You can't make a league of only National Team members; that's not possible. We need everyone involved in this to make this work."

As part of her involvement in the PWHPA, Sass was one of the players selected to travel to Japan for a three-game Dream Gap Series tour stop. That stop has since been postponed to the 2020-2021 season. She also recently played in a short hockey game at Madison Square Garden as part of "The Last Game," a documentary to promote climate change awareness.

While she fully admits that it isn't the end goal to hold a full-time job and play hockey, she'll keep doing it – at least for now. That's not to say that she hasn't thought about what it would mean to have a future where professional women's hockey offers a livable wage.

"It's a very loaded question," she said. "The end goal would be to be able to just do one thing, have that living wage and not have to do the other jobs."

If it came down to it, she has put a lot of thought into the opportunity to pursue pro hockey as a full-time career.

"I think that if it's a livable wage, I would not pass up the opportunity to play professional hockey with the resources that we deserve," Sass said, carefully choosing her words to make her intentions clear: it's largely about the livable wage, but that's not all there is to it.

"Being able to focus all of my energy and time into training, trying to be the best goaltender that I can possibly be; I don't think we've ever had that opportunity yet – or at least, I have not, in North America."

It's difficult to talk about the hypothetical, but that's all we can do when discussing the future of women's hockey. For Sass, and the PWHPA at large, that future involves the NHL.

"I think it's clear that we definitely see a path forward with the NHL," Sass said. "Over the past few months, I think you've seen in the media, a lot of activations by the NHL, where it's a female hockey ambassadorship or other NHL careers, like Blake Bolden as a scout with the LA Kings, or the All-Star event."

"I'm hopeful that we can achieve an NHL-backed league soon," she added.

While the PWHPA continues to work for the future, Sass will continue her own work as a pro hockey player, an architect, an artist, and a STEM advocate.

"I think we're definitely making progress," she said. "I'm advocating for the players that are currently living through having multiple jobs and trying to train; for the retired players that were forced into retirement way too soon, and if not for them, for the future players, to have a livable wage so they don't have to go through what I'm currently going through."

"Even though I'm this ambassador and having a career in architecture and in hockey, I'm not advocating that people should be doing both at the same time," she said. "I'm simply making a statement that you don't have to have a stereotypical job; you can push the boundaries of what people or society think is possible."