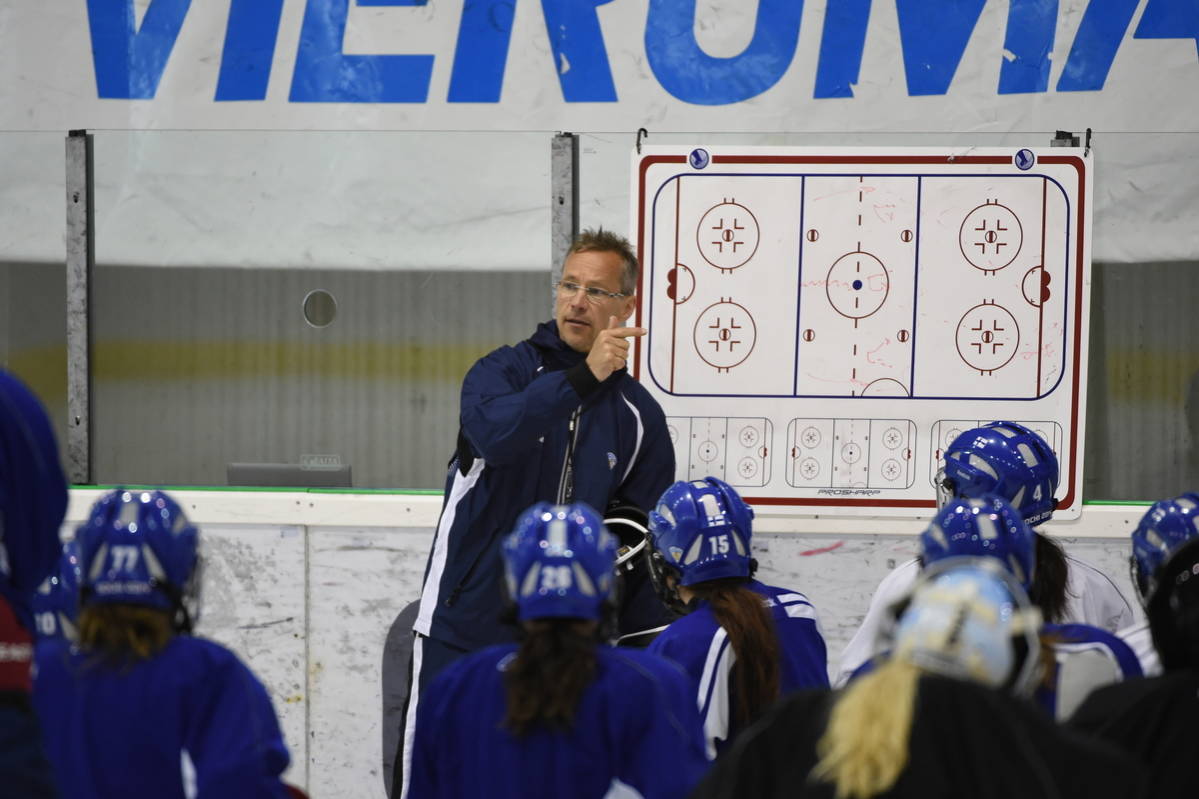 While the United States and Canada are still the best nations in the world for women's hockey development, a culture change is taking place in Finland that may make its women's national team even more competitive.

When Naisleijonat head coach Pasi Mustonen recently took to both the blogosphere and the media to air his grievances with the treatment of elite female hockey players in Finland, his most frequent comparison was not to the United States or Canada, but to neighboring Sweden.

"In Sweden, sports political debate has forced the SHL-clubs to respond to the situation," he wrote, and contrasted that against the "Stone Age way of thinking" displayed by the "mostly male" Liiga club heads in Finland.

During the 2016-2017 season, the highest level of domestic competition for Finnish women came from the Naisten-SM Sarja, an eight-team league founded in the early 1980s. Five of those eight teams shared names and associations with men's Liiga teams, although they were all but invisible and received few resources. The head of the Finnish Ice Hockey Association is on record as saying that he does not believe it should be compulsory for Liiga teams to establish or invest in sister clubs.

In 2016, the newly-formed Svenska Damhockey League (SDHL) superseded Riksserien as the highest level of women's professional hockey available in Sweden. The league's 10 teams each share names with their men's SHL counterparts, although the amount of support given varies from club to club: for example, Linköping's coaches all work together to create a common system and increase unity between the men's and women's sides, while Frölunda recently turned down a proposal to add an SDHL team to their organization.

15 Finnish women played in the SDHL during the 2016-2017 season, eight of whom will represent Finland at the upcoming World Championships in Michigan. Some of the most famous names in Finnish hockey play in Sweden, including Michelle Karvinen, Riikka Välilä, Minnamari "Minttu" Tuominen, and Naisleijonat captain Jenni Hiirikoski. In addition, the league's higher competition level and greater resource allotments draw international stars in ways that the Naisten SM-Sarja does not; Olympians Jennifer Wakefield, Florence Schelling, Molly Engstrom, and Yekaterina Smolina have all played in the SDHL this season.

When Finnish public broadcast network YLE asked for comment on March 18, Executive Chairman of the League Board of Directors Heikki Hiltunen responded, "The SHL has a quite different economic framework in comparison to Liiga clubs...in addition, the market and the economy are bigger."

It's worth noting that the terms of Mustonen's own employment is unique in the history of Finnish women's hockey, as he's the first national team coach to be employed full-time. Finnish Ice Hockey Federation board member Emma Terho -- a former Naisleijonat player and the first woman to serve on the board -- called the investment a "key step in the development of players" at a press conference in Helsinki on March 21.

That press conference was held to announce that the newly-named Naisten Liiga -- Women's League -- will take over from the existing Naisten SM-Sarja. The timing of the announcement coincides with an important period in Finnish women's hockey: the Pyeongchang Olympics are less than a year away and the 2019 World Championships will be held in Finland. It has yet to be seen if the men's Liiga clubs will get behind the rebranded league, but it could be an impressive stepping stone towards making Mustonen's vision a reality.

In the short term, the creation of the Naisten Liiga tells the world that Finland wants to be taken seriously as a women's hockey powerhouse. There's no doubt that the Finnish Ice Hockey Association sees their window of opportunity, but the Naisten Liiga will need money to flourish, period. Money will buy better playing conditions, better players, and better development, all of which will create a better on-ice product. A better on-ice product will get better exposure, which, if utilized properly, will increase revenue -- and will allow the cycle of improvement to continue.

While the rebrand marks a clear attempt to tie the women's game to the men's in the minds of sports fans and potential sponsors alike, it will be all but meaningless if increased financial support for women and girls doesn't follow. A shiny new logo won't keep younger players in the game if the choice is between a passion and a sustainable career, nor will it convince Finland's best players to leave the SDHL and come home: only less financial hardship and more room to grow at the highest level will accomplish that goal.