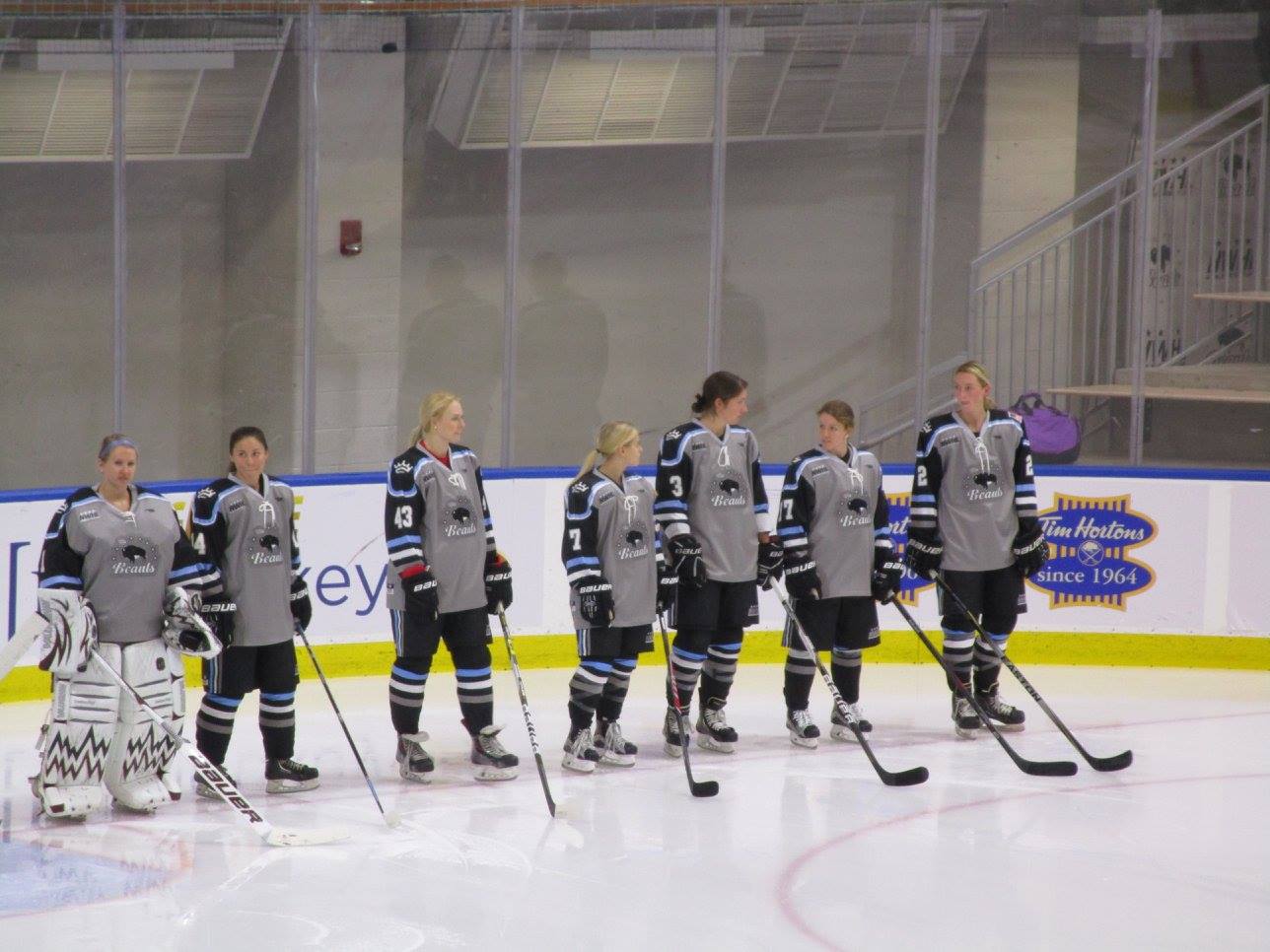 The Buffalo Beauts retained several of their core players through free agency, but they still have a much different look for the 2016-2017 season. The team has nine new players this season, seven of whom are new to the NWHL in general.

Goaltender Brianne McLaughlin, who went 4-6-0-3 with a 3.34 GAA and .907 save percentage last season, returns to the Beauts for her second season. Buffalo rounds out their crop of netminders with league newcomer Amanda Leveille, who went 29-4-1 with a 1.29 GAA in 34 games with the Gophers last year.

A trio of defenders return to Buffalo this season, as captain Emily Pfalzer, Megan Bozek and Paige Harrington each signed on with the Beauts once again. Pfalzer, a Western New York native, registered 12 points in 17 games last season, while Bozek -- known for her infamously hard shot -- put up 13 points in 16 games. Harrington was one of just four Beauts skaters to appear in all 18 games last season, registering three points.

Joining them on the blueline will be three NWHL newcomers: Lisa Chesson, Anne Schleper and Sarah Casorso.

Chesson, a left-handed defender, won an Olympic silver medal in 2010 with Team USA. The Ohio State graduate has also appeared in the Four Nations Cup and the IIHF Women's World Championships.

Schleper, a fellow Olympian, will join the NWHL's Beauts after playing for the Minnesota Whitecaps last season. Schleper is a University of Minnesota graduated who, like Chesson, has appeared in multiple international tournaments for Team USA.

Casorso signed with the Beauts in the midst of NWHL free agent camp in Buffalo on June 26. She played for the University of British Colulmbia from 2010 until 2015, putting up 66 points in 121 games and earning a number of honors, including First Team CIS All-Canadian.

Four forwards -- including three of the Beauts' top scorers from last season -- will return to Buffalo this year. Kelley Steadman will have a full roster spot this year after acting as a practice player last season. Steadman led Buffalo with 20 points, including a team-high 13 goals, in just 10 games.

Skeats, a power forward who joined the team late due to visa issues last season, put up just shy of a point-per-game (14 in 15), while Browne registered a respectable 12 points (5-7) in 18 games. The trio was arguably one of the Beauts' top lines and should look to continue that chemistry this coming season.

Buie appeared in all 18 games for Boston last season, registering seven points, and also played in all four Isobel Cup Playoff games as the Pride won the league championship. Darkangelo, another national team member, was a big contributor for the Whale, registering three points -- including a team-high 10 goals -- in just 13 games.

Finally, the Beauts' roster is capped off with a trio of rookies at the pro level: Emily Janiga, Kristina Lavoie and Jordyn Burns.

Janiga, a Western New York native, signed with the Beauts this summer after being drafted by her local team in 2015. In 141 games with Mercyhurst, she registered a whopping 151 points (72-79). Lavoie attended NWHL free agent camp in Buffalo this summer before signing with the Beauts on July 30. The University of New Hampshire graduate registered 108 points (57-51) in 134 games between 2009 and 2013. Burns, who is listed as both a forward and defender, played for the University of Minnesota between 2012 and 2014 and replaces Shelby Bram on the Beauts' roster after Bram chose "to pursue other opportunities", negating her contract that was signed back in May.

The Beauts will certainly be an interesting team to watch this coming season, with so many newcomers on board. While the loss of Meghan Duggan to the Pride is certainly not ideal, the upgrade of Steadman to a full-time roster spot is undeniably huge for the team. The unfortunate piece of this is although the Beauts now have Steadman full-time, they lose the one-two punch of Steadman and Duggan playing together. Their on-ice chemistry will certainly be missed.

One piece to watch this season for the Beauts will be Darkangelo, who could prove to be a dangerous addition to Buffalo's forward core. Adding a pair of Olympians on the blueline can only help to make Buffalo's defense stronger, and the return of McLaughlin in goal is also huge for the Beauts. She was the cornerstone of Buffalo's netminding last season and will likely split the time more evenly this year with Leveille.

Several Beauts from last season have moved on, with Tatiana Rafter signing with the Riveters as a late addition, Lindsay Grigg signing in Europe, and goaltender Amanda Makela registering for the CWHL Draft. There are also several Beauts from last season whose future seems uncertain, including Erin Zach, fan favorite Hayley Williams, and Jessica Fickel.

The other big changes for the Beauts for the coming season are in the front office. Last season saw Buffalo co-coached by Shelley Looney and Ric Seiling; this season, Seiling remains on board, with fellow former NHLer Craig Muni joining him behind the bench. In addition, Seiling takes on general manager duties, filling in Linda Mroz's spot. One point of consistency will be the Beauts' home rink, as they'll once again play at the HARBORCENTER in downtown Buffalo.

Between the roster changes and front office adjustments, there are a lot of question marks going forward for the Beauts. Seeing how all the new and old pieces fit together for the upcoming season will just be a matter of time.